Although Korean food is still an undeniable favorite among Busan’s residents, new and international influences are slowly making themselves felt on the city’s dining scene. Hal Swindall explores Busan’s French culinary prodigy, and visits three of the city’s most respected and sought-after French restaurants.

South Koreans are proud of their traditional cuisine, and local food is celebrated for its health qualities. As a result, prior to 2000 there were few foreign restaurants outside of certain neighborhoods in Seoul. Over the last decade, however, attitudes toward foreign cooking have changed among many Koreans; someone leaving the country in 2000 and returning a decade later would be astonished at the proliferation of Indian, Italian, Thai and even Turkish restaurants, even though they are still limited to special areas of major cities.

Of these new foreign eateries, arguably the most significant are those serving food from France, since French cuisine is widely considered the most rarified. In fact, so much culinary courage has blossomed in Korea that a branch of its bakery chain Paris Baguette recently opened in Paris! We take a look at those located in Korea’s second city – Busan. 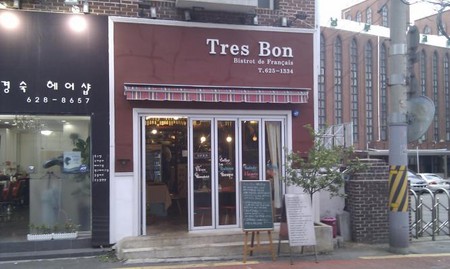 The first of Busan’s signature French dining establishments is Tres Bon, launched in July of 2012 by a Korean chef Ham Chungmin. A Busan native, Chef Ham studied hotel management at Queensland University in Australia, and then worked at a high-class hotel in Lausanne, Switzerland. While there, he took a cooking class that sparked his interest in French food. He went on to study for two years at the Bocuse Institute in Lyon, France, as well as learning about wine in the cellars of Bordeaux. Ham then became general manager of a five-star hotel and a university professor before opening Tres Bon, whose name stands for ‘very good’ in French. As chef-proprietor, Ham says his mission is to bring healthy and good-tasting food to people, and according to many, the success of this mission is evident.

Like most other French restaurants in Korea, Tres Bon has a small menu, but everything on it is worth trying. All dishes are in filling or extra-filling portions. There is nothing Korean about his duck confit with orange sauce or lamb chops. Other French staples like coq au vin and Alsatian chicken bring poultry to the fore. Ham also makes excellent pasta dishes for under 20,000 won. Upon reservation, Ham can also prepare his cuisine royale, but otherwise there is no need to call ahead. 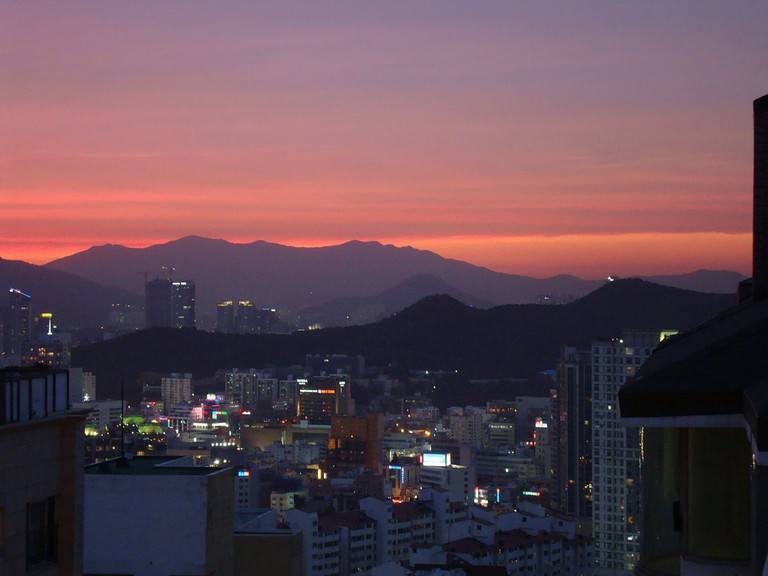 The view from Dalmaji Hill over Haeundae | © Jens-Olaf Walter / Flickr
Next up is Merciel, which opened in October of 2012. Unlike Tres Bon, which is near the beach but without a view, this one’s name comes from the French words for ‘sea’ (mer) and ‘sky’ (ciel) because it offers a spectacular vista of both. Merciel is the largest French restaurant in Busan, split over two floors. The first is a formal area with all-French set menus, while upstairs is a casual brasserie with mostly Italian dishes. There is also an artsy gift shop called Merciel Bis, as well as salons for private events. All this is crammed into a small but fascinating building with sundry stairways and an elevator connecting the levels. The brasserie is well worth going to, and serves French dishes like steak tartare as well as a fantastic chicken caesar salad, plus rarer varieties of pasta like parmeggiano reggiano and merlanovo. However, it is the purely French area below in the rez de chaussee that is truly special. The ‘captain’ of this zone is a bright young woman named Kim Eunsun, who goes by the English name of Kelly and will make sure your meal is just right. For dinner, there is the ciel course for 88, the mer course for 108 and the full course for 138,000 won. All the dishes are prepared by chef Hwayoung Yoon, nephew of a former Korean ambassador to France. Yoon spent many years in the country studying French cuisine, and has worked at Michelin-starred restaurants there and in Korea. He likes to add a Korean touch to his cooking, such as a spicier sauce for lamb chops than would be found in France. Nevertheless, Merciel’s fare is of Gallic origin, and Kelly Kim can explain each course to diners. She can also help with the 18-page wine list, which has bottles and half bottles from around the world for 55 to 429,000 won, although most are 150-250,000.

Diner, Restaurant, French, $$$
Facebook
Email
Twitter
Pinterest
Copy link
Share
If you prefer a university ambiance for your French meal rather than a seaside one, then Busan’s newest addition, Le Jardin, is a great choice. Situated in an alley in the Kyungsung University-Pukyung University area (known as Kyungsung for short), it was opened in May 2014 by a Franco-Korean couple. The Breton chef Guillaume Strub does the cooking while wife Shim Seonhyeon greets and seats diners. Seonhyeon became interested in France while on volunteer service there, and has studied at Nancy and Rennes. She and Guillaume were married in 2005, and worked at a couple of hotels in Korea before branching out with their own. An article written about Le Jardin appeared in Busan’s local paper immediately after it opened, so it began to get business quickly and requires reservations. Le Jardin has the smallest menu of all French restaurants in Busan, but its dishes are also the cheapest. The priciest item is the menu du jour for 24,000 won, and this is changed almost daily. Next is the stuffed tomato (tomate farcie) for 12,000, which will leave the diner feeling stuffed as well. There are also quiche, homemade sausages and tarte provencale, a kind of tomato and squash pie. Le Jardin, Nam-gu, Yongso-ro 34 beon gil 6-2, Busan, South Korea, +82 51-611-0937 While Busan remains behind Seoul in its number of French and other dining options, the three spots covered here are only a few of the exciting new additions to Busan’s dining scene. Most visitors touring Busan might naturally prefer to try Korean food, yet the very rareness of Tres Bon, Merciel and Le Jardin make them worthwhile. Korean or not, their cooking is a godsend to residents wanting something different.
Give us feedback