Gamcheon Culture Village, popularly known as South Korea’s Lego Village, is famed for its art, culture and creative residents. With its maze of winding streets, it’s easy to lose track of where you’re going – but in our opinion, this is no bad thing.

A brief history of Gamcheon Village

Before the 1950’s, Gamcheon was a small village of around 20 houses. By 1951, the small hilltop town had expanded to accommodate over half a million residents – many of whom were refugees fleeing from the Korean war. Soon, the place was burgeoning with shanties made from corrugated tin and planks of wood. 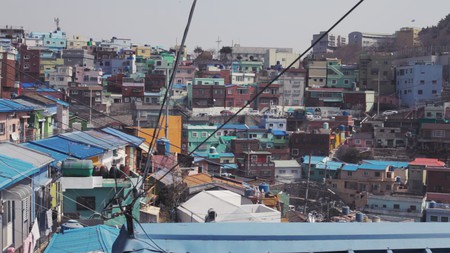 At around the same time, an obscure religion founded by Cho Ch’ŏlje was on the rise. Taegukdo is an amalgamation of several South Korean belief systems, but omits the patriarchal and hierarchical undertones of major religions.

The way houses are scattered along the hill is no accident. Though there appears to be little order to the madness, the houses are situated in such a manner that no one house is blocking any of the others. The planning philosophy is reflected in the one of Taegukdo’s core tenets: that permitting each other to flourish is beneficial to everyone. 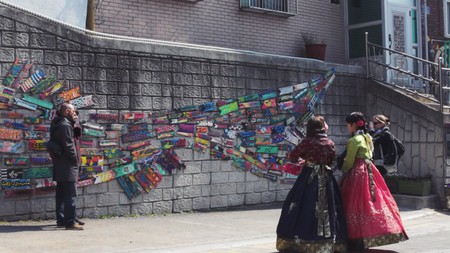 Why is Gamcheon so colourful?

One day, Gamcheon’s creative residents launched a public art project and the whole village was drenched in a kaleidoscope of colours. At first, the reception to the village’s bold new look was mixed. Some loved it straight from the get go. Other residents felt self-conscious about what little they had to show off, but soon saw the positives of meeting the curious tourists who wanted to see the village for themselves. 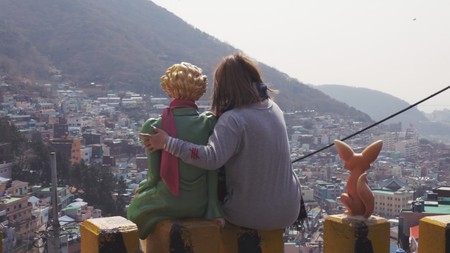 Gamcheon now stands as a hopeful testament to the beauty that comes from diversity. Had the original villagers not welcomed hundreds of thousands of war-torn refugees, the village would look very different to the labyrinthine maze of colours it is today.