Funerals For The Living: South Korea’s Controversial Approach To Life 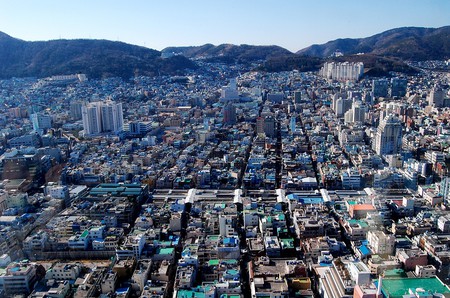 Is it necessary to die before you learn to live?

In March 2015, in the South Korean county of Haenam, a six grader jumped from the 11th floor of her apartment because she failed tests at school. She left a note saying: “To mom and dad, I’m sorry I did wrong.”

According to Statistics Korea, the top cause of death among people between 10-39 years old is suicide. Having lived in South Korea for one year, I see where such a shocking finding stems from. Students are pushed hard by family and teachers to perform with nothing but excellence in order to secure “a better life” – a working life in grand companies such as Samsung, LG and Hyundai. Those who make it inside these colossuses are soon to find out that it’s nothing like their great expectations – they are compelled to work 70 hours per week without overtime pay, are socially isolated and come to be emotionally vulnerable.

The people who think ending their lives is the only way out from the social oppression are now invited to attend their own funerals and reconsider. The participants of the controversial healing process wear traditional funeral dresses, have their portraits taken, write farewell letters and lay inside their closed coffin for 10 minutes. But is such a macabre initiative the solution to one of Korea’s biggest social problems?

“When I first heard about the funerals for the living, I thought it’s totally ridiculous. Suicide has its roots deep in a person’s mind and heart, and cannot be resolved by such superficial actions,” said Song Hun, a South Korean art postgraduate. “Although people who pretend to die may have an appreciative attitude towards life, I think it will be only for a little while, and it cannot be sustained for a long period of time. It’s just a small event, not healing.”

By nature, humans have to come close to losing things in order to appreciate them. Testimonials from terminally ill patients often show us exactly that: if they had a second chance, they would take life less seriously (exam failures, achievement of an ideal body shape and declined work promotions aren’t high on their life’s narrative). Yet, everyday people die for them – literally.

“What people need is a psychiatrist or a counselor – someone to talk to about their thoughts,” said Keri, an English teacher at Hyunsan Middle School. “However, South Korea doesn’t ‘believe’ in depression or mental illness. It pretends these things do not exist. If you mention you have something wrong with you, you are looked down upon and shunned. When I was going through a hard time and researched therapists in my area, I couldn’t find any. I had to take measures into my own hands and start a journal to help cope with my feelings. And this is just a small blip in my OK life. I am not depressed, overly stressed or worked, or thinking about suicide. Korea should focus on the cause of the problem instead of battling the effects.” 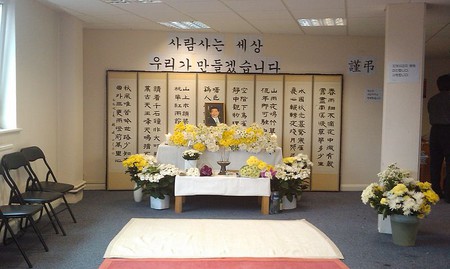 The competitive education system in South Korea reminds me a lot of the Greek education system I was nurtured in. As students, we really didn’t have a life until we entered university. The day started with school, continued with studying, then private tuition until 10 p.m. and studying again past midnight. But the difference between the two youths is the sense of responsibility towards their country – South Korea is the only country that has managed to go from ‘an income per head on a par with the poorest parts of Africa’ to now ‘being rich within a working life.’ To the Korean, it is constantly stressed anything less than serving their country through their personal success is a failure.

Mrs. Emma, whose younger sister committed suicide not long ago, hadn’t heard of the fake funerals practice until I mentioned it. She thinks it’s shameful this movement is breaking the international news. “People think of suicide not because they appreciate life but because they are tired of living,” she said.

Indeed, the rise of the Hell Chosun and Hell Korea groups suggests the young Korean population is dissatisfied with the society they grow up in – an infernal feudal kingdom stuck in the 19th century where ambitions are crushed and free will is an illusion.

To cheer us up, Sooyeon, a stage director, says while scrolling up and down images on her mobile: “Looking at the pictures of these pseudo-funerals, the atmosphere isn’t artistic. In this kind of experience, the atmosphere is very important, and I don’t like it. It’s too dreary.”

I have lived in seven countries across the world, and I developed with the Korean people that I had met the most special and deep relationship than with any other nation – without speaking the same level of English. Koreans are gentle, honest, generous and ready to get out of their comfort to help at any time. Such a level of sensitivity, however, in combination with forced social expectations, doesn’t seem to result in the upbringing of satisfied citizens.

No doubt the experience of seeing your life through your death might be stimulating the struggling minds and revitalizing the broken hearts, but to expect it to resolve the problem of the country’s high suicide rates is a tall order. I would like to think that Korea has backed a winner with the mock funerals, but realistically speaking, it should start working on a plan B, which gives a safe space to its youth – a place to imagine, play and hope.