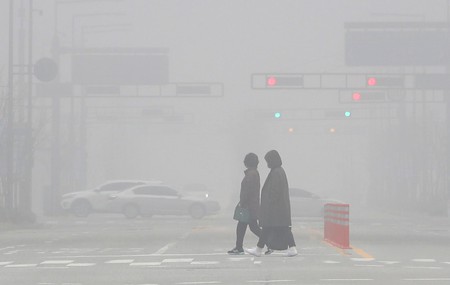 Schools in South Korea are being forced to keep students indoors because of increased smog and air pollution originating from China, resulting in outdoor physical activities and sports being replaced with indoor virtual sports.

According to reports concentrations of fine dust have soared more than 300 micrograms per cubic meter in Seoul and the Gyeonggi Province in recent days, reaching double the level that prompts alerts from local authorities. The increased smog and air pollution is a result of emissions from vehicles, power plants and industrial facilities, coupled with a blanket of haze floating across the Yellow Sea from China, which occurs seasonally each spring.

Seoul Banghak Elementary School recently banned students from doing sports outdoors and spending their breaks outside. The school introduced a virtual sports classroom which enables students to play football and other games without going outdoors.

“I prefer going outside, but it is still fun this way because I can play with my friends,” Choi Eun-joon, 12, told The Korea Herald. “And I also get to practice all sorts of soccer skills like kicking, throwing, and heading.”

The Ministry of Culture, Sports, and Tourism announced plans to invest approximately $6 million on virtual sports facilities at 178 schools across South Korea before the end of 2018.

Despite the issues and worsened air quality, the Chinese government will continue plans to create more incinerators on the east coast, where they won’t cause domestic pollution. There are approximately 244 incinerators in existence with 121 more under construction, and another 106 being planned, according to Chosun Ilbo.