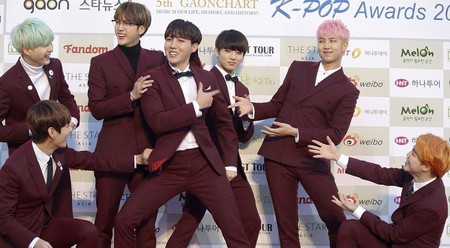 If you haven’t noticed yet K-Pop sensations BTS are slowly but surely taking over the world.

The boy band, made up of seven members, was formed by Big Hit Entertainment in 2013. Since then they’ve had best-selling albums, sold out concerts and awards galore both in South Korea and in the US.

BTS fever is expected to peak with the release of their new album Love Yourself: Her on September 18.

Read our letter-by-letter guide for the lowdown on the band that everyone is obsessing over.

BTS fans are known as A.R.M.Y. which stands for ‘Adorable Representative M.C. for Youth’. It’s a cute name for one of the most loyal and passionate fandoms in music right now. In fact, so powerful are the fan’s collective might that they helped clinch the Top Social Artist award for the band at the Billboard Music Awards – overtaking the likes of Justin Bieber and Selena Gomez.

B is for ‘Blood Sweat & Tears’

Love these dudes! See you guys this summer @BTS_twt pic.twitter.com/i5TPqGGdzO

C is for Chainsmokers

BTS surprised fans by announcing a collaboration with The Chainsmokers. The K-pop band will be working with the American electronic duo on an EDM track called ‘Best of Me’ for their upcoming LP. It is the first time they have collaborated with an American artist on an album track.

D is for Dark & Wild

Dark & Wild was the band’s first full-length studio album – following on from their School Trilogy series, which featured 2 Cool 4 Skool, O!RUL8,2? and Skool Luv Affair. It was themed around the concept of love, desire and heartbreak. Title track ‘Danger’ played up to their bad-boy image, with the video showing BTS dancing in a disused subway station.

@Twitter hey i guess you must have noticed how big @BTS_twt are by now so can u pls make the #BTS emoji official? pic.twitter.com/ILdFjTAUCy

E is for emoji

BTS got the ultimate accolade last year when Twitter launched the first ever K-Pop emoji featuring the boy band. An image of their bulletproof vest logo – a nod to their name Bangtan Sonyeondan (Bulletproof Boy Scouts) – would appear when typing the hashtags #BTS and #방탄소년단 (their name in Korean), although sadly it seems to have now been deactivated. #bringitbackplease

Featuring on BTS’ second studio album Youth (2016), ‘Fire’ – apart from being an absolute banger – also has an important message for young fans: ‘Just live how you want/Your life is yours.’ Amen, BTS.

Yes, they’re a boy band, but that doesn’t mean they can’t sing about female empowerment. ‘21st Century Girls’ is all about girl power and not letting others get to you. Shine, ladies.

H is for hair

BTS’ A.R.M.Y. keep close tabs on everything the boys are saying and doing but nothing attracts more attention than their hair – particularly what colour it is. The bandmates have kept fans on their toes by continually switching it up. Red, purple, orange, blue, green, pink – they’ve tried it all – and they recently unveiled brand new hues.

I is for influential

Time named the band one of the 25 Most Influential People On The Internet. They also ranked no. 5 in Forbes’ Korea Power Celebrity list earlier this year. Need we say more?

J is for Jin, J-Hope, Jimin and Jungkook

Jin is the oldest member of BTS and won himself the nickname of ‘Car Door Guy’ after a photo of him at an awards show getting out of a vehicle went viral. J-Hope, also known as Hobi, and Jimin are the band’s dance gurus. J-Hope once won a national dance competition in South Korea while Jimin studied contemporary dance in school. Jungkook is the youngest member of BTS and was 15 when the group first debuted.

K is for K-Pop

The band have emerged victorious in the David v Goliath battle against the ‘Big 3’ of record labels – SM, YG, and JYP – that dominate the K-Pop scene. BTS have achieved great success even though they come from a small label, Big Hit Entertainment. J-Hope once said: ‘We might not be under a big, major label, but the name is literally ‘Big Hit’. So it’s a big label, and we will make hits.’

L is for Love Yourself

The band are getting ready to drop some new music but before they do that they have been whipping up excitement with the Love Yourself series. They’ve already released some posters and highlight reels but have kept fans guessing as to what exactly the whole concept involves. The sentiment is something the band have long pushed. As Rap Monster said on stage accepting their prize at the Billboard Music Awards: ‘Love myself, love yourself.’ Preach.

M is for mental health

BTS have gone far beyond the glossy lyrics and themes normally found in K-Pop. Instead, they’ve explored deeper issues like bullying while members like Suga have been very vocal about facing issues like anxiety, depression and suicidal thoughts in their music.

N is for name change

BTS are also known as Bangtan Boys. Their name in Korean and Japanese translates to Bulletproof Boy Scouts but they recently changed it to Beyond The Scene, suggesting that they’re getting ready to dominate the global music scene.

O is for O

As a teaser for their forthcoming album, the band have been releasing a set of photos for each letter in the word ‘love’. Our favourite is O, which shows the band looking oh-so-dreamy and romantic against a backdrop of clouds and fields. Lush.

P is for pants

Jin once revealed that his trousers fell down during one of their early performances. It was the singer’s first time wearing a microphone pack, which he had attached to his pants. Unfortunately, it was too heavy and during their rigorous dance moves, his trousers ended up around his knees. Oops.

Q is for LGBTQ rights

Rap Monster showed his support for LGBTQ rights by recommending Macklemore’s gay equality anthem ‘Same Love’. He tweeted: ‘It’s Rap Monster. A song about homosexuality. I heard this song before but I didn’t know the lyrics, now I know them and I like the song twice as much. I recommend Macklemore & Ryan Lewis – Same Love.’

R is for Rap Monster

Known as the band’s leader, Rap Monster was an underground rapper before joining BTS. He went by the name of Runch Randa and was also part of the Daenamhyup crew. The musician claims he learned English from watching episodes of Friends (Chandler was his favourite) and recently collaborated with US hip hop star Wale.

S is for Suga

Suga, also known as Agust D, is a real all-rounder in the group. Producing, rapping and writing lyrics – he’s done all of these and more. He’s also been pivotal in combining BTS’ catchy pop tunes with socially conscious lyrics that resonate deeply with their young audience.

BTS are so good at Twitter that they even hold a Guinness World Record for the most retweets on the social media site for any band. The group are estimated to get an average of 152,112 retweets per post.

The touching music video for ‘I Need U’, the title track from The Most Beautiful Moment in Life, Part 1, was a departure from the usual K-Pop formula of super slick choreography. Instead, it showed the band members struggling with pain, depression, and anger.

V is for V

V’s name is short for ‘victory’. The singer is a big art lover and also the only band member who acts. He recently appeared in the Korean TV historical drama Hwarang: The Poet Warrior Youth. He’s also seriously good at Dubsmash.

W is for Wings

The band’s second album Wings became the highest-selling K-Pop album in America. It also made its way into the UK Albums Chart at number 62, making history as the first Korean act to do so.

first day as the newest member of @BTS_twt. love u guys 💕🇰🇷💕🇰🇷 pic.twitter.com/EyUOWxfBl5

X is for Charlie XCX

Yeah, they’re mates now. British singer Charlie XCX posted a picture of herself chilling with the band. Cue a whole load of BTS-inspired versions of ‘Boys’ on the internet.

Y is for staying youthful

The boyband are known for their glowing and flawless skin so it makes sense that they have brought out their very own cosmetics and skincare line. BTS x VT Essence Sunpact is a sunscreen that comes in seven different colours – blue, yellow, gray, white, green, purple, and pink to match each member.

bts ships in a zombie apocalypse! a small thread that i did on instagram! pic.twitter.com/bcW5q3hBya

Z is for Zombie fan fiction

What would a good boyband be without any fan fiction to bolster their fans imaginations? BTS’ seem to be focused mainly on the band becoming zombies and somehow fighting their way out of an apocalypse of the undead.