A Year in 24 South Korean Festivals 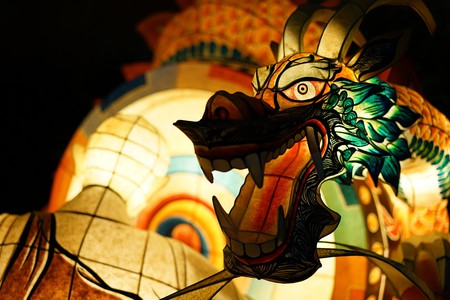 Despite South Korea’s rapid modernization, there are still plenty of ways to learn about the country’s rich history, colorful culture, and unique traditions. Perhaps no way is better than attending a festival, of which there are many throughout the year. From an internationally renowned mud festival to lesser-known gatherings that commemorate nature, food, historical events or the changing of the seasons, there’s never a lack of celebrations in this highly diverse country.

Watching the first sunrise of the year is a key element of New Year celebrations in South Korea, and Homigot, situated on the eastern coast, is one of the most popular destinations to partake in the tradition. Here, the Homigot Sunrise Festival is held annually and includes a fire show, sunrise concert and other activities, such as kite flying and the release of “hope balloons”, which symbolize resolutions for the new year. Participants can also get a taste of tteokguk, a soup made of rice cakes that is traditionally eaten on New Year’s Day after watching the sun rise over the city’s famous giant hand sculpture, which reaches up from the sea. 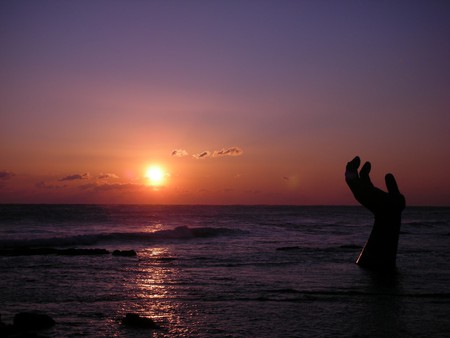 Each year, approximately 1.53 million people flock to the sleepy town of Hwacheon in Gangwon Province to try their hand at ice fishing at the Mountain Trout Ice Festival. In addition to pole fishing, brave festival-goers can attempt to catch the famous mountain trout by hand in the town’s icy waters, which can then be cooked on-site and enjoyed as a tasty meal. Other fun ice events include ice sculpture viewing, sleigh riding, ice soccer and a homemade sled race.

Yet another festival that celebrates winter in Korea is the Taebaeksan Mountain Snow Festival, held in the national park of the same name. The biggest draw to this icy celebration is its large-scaled snow sculptures. Other highlights include the Taebaeksan Mountain Snowflake Hiking Competition, snow sliding, and the Igloo Café, where visitors can enjoy a cup of hot chocolate inside a giant igloo. 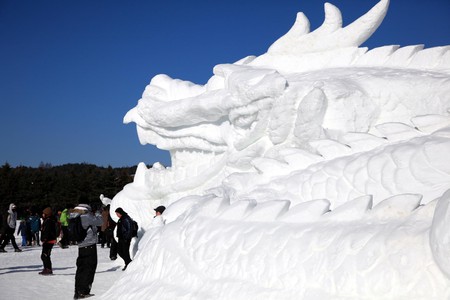 Celebrating the long tradition of bullfighting in Gyeongsangbuk-do Province, the Cheongdo Bullfighting Festival has drawn approximately half a million visitors annually since beginning in 1999. It is the biggest bullfighting championship in the nation, and offers a number of hands-on experience programs, a showcase of local agriculture, and exhibitions of the history of bullfighting.

As part of the three-day Jeju Fire Festival, Jeju Island’s Saebyeol Oreum hill is set ablaze every spring to welcome good health and a good harvest for the new lunar year. The event represents the Korean tradition of burning old grass to wipe out vermin ahead of the new planting season. Apart from the awe-inspiring spectacle of the fire, the festival also features folk games and a magnificent fireworks display.

A few times a year, something amazing happens in the southwestern part of the country: the sea around Jindo in South Jeolla Province parts, and visitors can walk along a narrow path through it to a nearby island. This phenomenon, sometimes called the “Moses Miracle,” is caused by the tide, and is celebrated at the Jindo Sea Parting Festival. In addition to experiencing this unique natural event, participants can also enjoy concerts, local cuisine and cultural performances. 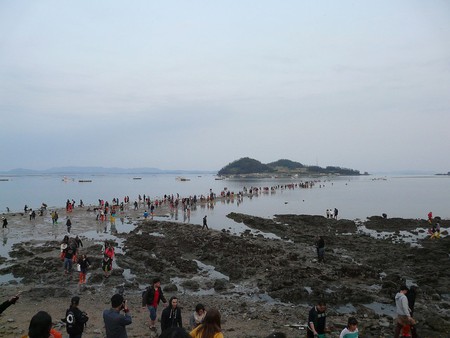 As spring settles over the peninsula, the city of Hampyeong in South Jeolla Province welcomes the new season with the Hampyeong Butterfly Festival. Here, visitors can wander through seemingly endless fields of colorful wild flowers and take in the sight of thousands of butterflies in their natural habitat.

While neighboring Japan may be more famous for its cherry blossoms, there are countless sites to witness their splendor in South Korea, too. The most famous of these is the Jinhae Cherry Blossom Festival, spread across two popular locations – Yeojwacheon (Romance Bridge) and Gyeonghwa Station. At the former, couples gather to create their own K-drama-worthy moments, while the later offers a spectacular show of cherry blossom “snow” as trains pass through the station. 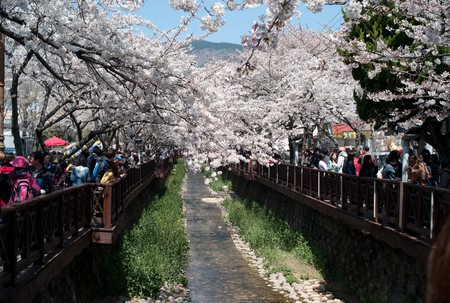 As the birthplace of Korea’s commercial tea industry and the largest producer of tea in the country, the small town of Boseong unsurprisingly hosts an annual green tea festival. A few must-visit events, primarily held in the green tea fields of the town’s planations, include picking tea leaves, making tea, and snacking on green tea snacks. Other programs include a tea exhibition, a giant tea ceremony, and various cultural performances.

One of Korea’s most aesthetically beautiful customs is the Lotus Lantern Festival, held during the annual Buddha’s Birthday celebrations. The entire downtown area of Seoul is bejeweled with multi-colored lanterns, creating a large, open-air lantern exhibition. A spectacular parade makes its way from Dongdaemun Gate to Jogyesa Temple. Here, Buddhist monks, along with members of the community, travel along the route with breathtaking lantern displays of animated tigers, dragons and even replicas of the Buddha himself.

Famous for its lush forests, Damyang County in South Jeolla Province celebrates its bamboo festival each year at Juknokwon Bamboo Garden for five days. The region’s ecosystem is known for its stunning endless forests of bamboo, as well as other plant life and cultural sites. In addition to the area’s natural beauty, another big draw of the festival is the food; regional treats include rice cooked in bamboo, bamboo ice cream and bamboo beer. 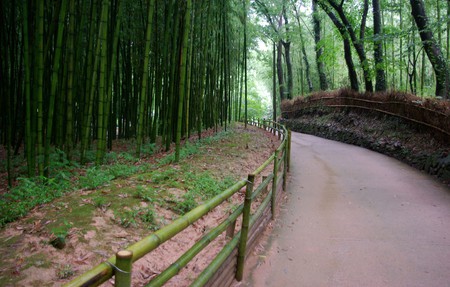 At the Icheon Ceramic Festival, those interested in the arts can get a first-hand look at the city’s well-known ceramic-making culture. Visitors can meet ceramic masters and make their own pottery or learn different methods of drinking tea. Other events include ceramic exhibitions, sales and performances.

Held in Incheon every July, Incheon Pentaport Rock Festival is one of the biggest and best live music events on the Korean Peninsula. In past years, the festival has been headlined by some of the biggest names in rock, such as Weezer, Panic! at the Disco, Nothing But Thieves and The Kooks.

Summers can be brutally hot in South Korea but Seoulites have found a way to cope with the extreme heat and humidity. Thousands get together in the university neighborhood of Sinchon as the temperatures rise in early July and cool off by shooting each other with water guns. The Sinchon Watergun Festival also features water slides and DJ performances to keep things cool.

At the famous Boryeong Mud Festival on Daecheon Beach, millions participate in what has become Asia’s biggest mud party. Festival-goers bathe, wrestle, and party in Boryeong mud, reputed to improve skin tone thanks to its high level of germanium and bentonite minerals. Other mud-centric activities include the “Mud King” contest, firework displays, mud slides and K-pop concerts. 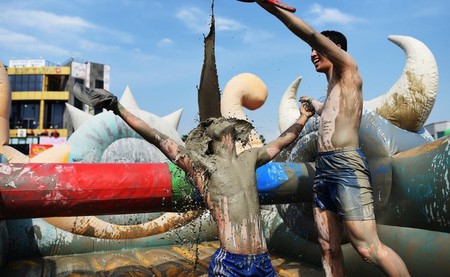 Similar to the Pride festivals held elsewhere, the Korean Queer Culture Festival is a modern Korean festival that aims to raise awareness about LGBT rights. The festivities include a pride parade and a film festival in downtown Seoul. Since 2000, the festival has seen participation grow from around 50 people to over 14,000.

As the sun sets over the mountainous town of Muju in North Jeolla Province, thousands of fireflies illuminate the summer night sky with their magical natural glow. The firefly festival celebrates the insect, which is considered to be very special in Korea, and includes activities like nighttime firefly viewing and fishing.

At the Haehoe Folk Village in eastern Korea, traditional mask dances are still very much a part of everyday life. People from all over the world travel to attend the Andong International Mask Dance Festival and watch Korea’s talchum (masked dances) and enjoy the unique “Seonyujul Bulnori,” an event in which fireworks drip like rain, creating spectacular reflections on the river. 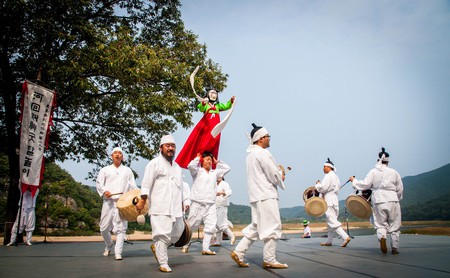 Every autumn, the town of Bongpyeong is covered in beautiful buckwheat flowers. In Korea, these are often a reminder of one’s first love, thanks to the famous novel “When the Buckwheat Flower is About to Blossom” by Lee Hyo-seok. The story takes place at the location of the Hyoseok Cultural Festival, held to celebrate the natural beauty of Bongpyeong.

A spectacle for the eyes, the Jinju Lantern Festival attracts droves of tourists from across the nation with its stunning displays of paper lanterns that float down the Namgang River. Presented in various shapes, colors and sizes, the lanterns are symbolic of those that were lit during the Jinjuseong Fortress Battle of the Imjinwaeran War in 1592 as a military strategy to keep Japanese troops from wading into the river.

The Busan International Film Festival takes place annually in Busan, and is one of the better-known film festivals in Asia. The event features hundreds of movies from a wide spectrum of genres, as well as those written and directed by artists from all over the world. 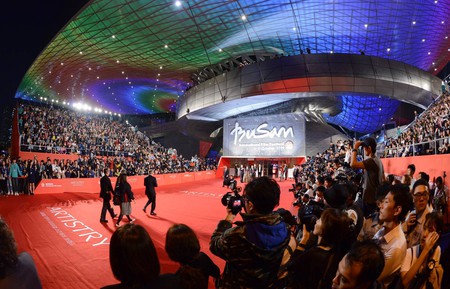 The colorful Seoul Lantern Festival takes place every fall at the picturesque Cheonggyecheon Stream in downtown Seoul. It showcases various types of lantern sculptures that follow a theme that varies each year. The event has become one of Seoul’s most iconic and most visited, with more than three million visitors annually.

Celebrating kimjang, the seasonal period of kimchi-making that has been designated as a UNESCO Intangible Cultural Heritage item, the Seoul Kimchi Festival invites participants to take part in a mass kimchi-making event. Visitors can learn how to make their own kimchi from a kimchi master, watch performances about kimchi, and even shop for kimchi from different regions. 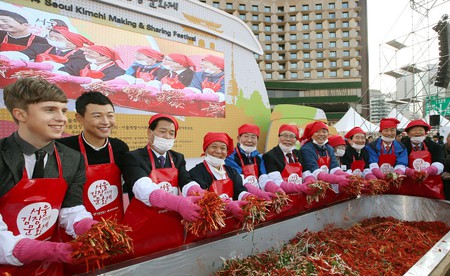 Lighting Festival at The Garden of Morning Calm (아침고요수목원 오색별빛정원전)

Held at the Garden of Morning Calm, the Lighting Festival is one of the biggest festivals of lights in the country. Blanketing an area of more than 300,000 square meters, gleaming lights add a festive glow to the natural beauty of the garden during the winter.