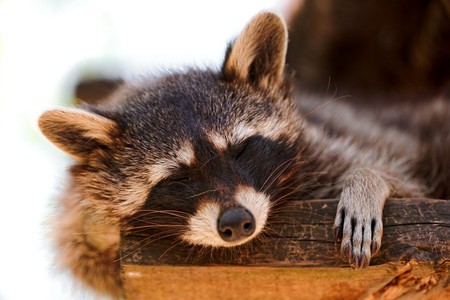 Cozy up with some of the cutest furballs on the peninsula at Seoul's pet cafes. | © Tambako The Jaguar / Flickr

Since its first introduction in Taiwan nearly two decades ago, the pet café craze has disseminated throughout the world, starting in Asia and then spreading as far as Sweden, the UK, and the US. But in Seoul, South Korea, pet cafés are taken to a new level, with many of them offering patrons the opportunity to canoodle with a vast variety of exotic animals. Get ready to experience the city’s most unique pet cafés.

Cafe, Fast Food, $$$
Facebook
Email
Twitter
Pinterest
Copy link
Share
Map View
As Seoul’s only parrot café, Wanggwan House (which translates to “chirp, chirp”) is perfect pet café for bird lovers. Among the species in residence, you can see cockatiels, cockatoos, an African Grey, and a Blue and Yellow Macaw, along with a few finches. Admission is 5,000 won (US$4.70) and for an extra buck, you’ll be provided with some snacks to spoil the birds, which they do enjoy. Furthermore, the owner is a parrot breeder, so if you’re looking to purchase one as a pet, you can do so here.

Cafe, Coffee Shop, Fast Food, $$$
Facebook
Email
Twitter
Pinterest
Copy link
Share
Map View
If you’re a nature lover, Thanks Nature Café might just be the perfect place for you. Gorgeously designed, the café boasts a relaxing atmosphere with plenty of greenery and an earthy interior. Hanging on the walls are artistic portraits of various animals, but one stands out from the rest: sheep. In addition to small figures and stuffed versions of the fluffy fauna, there are also two live well-groomed sheep that reside at the café on the outside patio, where they can be visited by patrons as they enjoy their coffee. The café’s menu features a varied selection of beverages, which are all made with natural sweeteners. If you’re feeling famished, try their waffles, which are also particularly tasty. The sheep think so, too, so don’t get them too close to the pen.
Open In Google Maps
486 Seogyo-dong, Mapo-gu, Seoul, South Korea
+8223357470
Visit Facebook page
Give us feedback 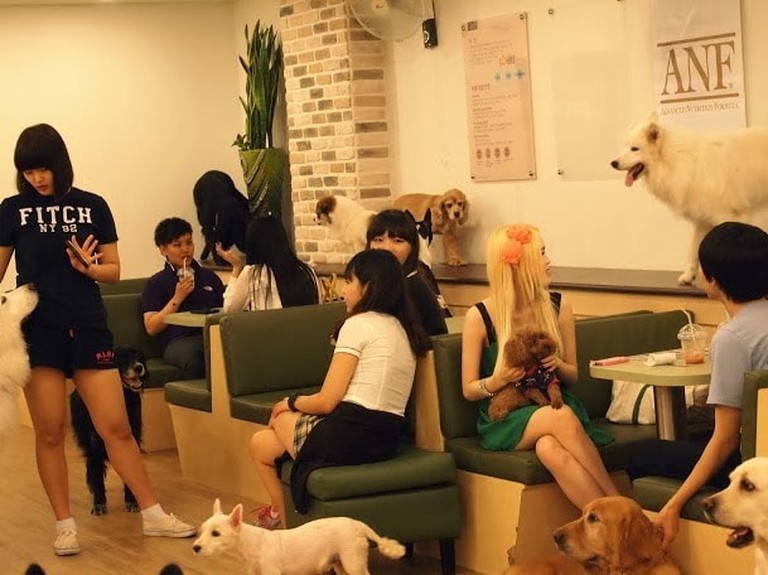 Bau House dog café | © Mimsie Ladner
With Seoul’s population density being double that of New York City‘s, most Korean urbanites reside in high-rise apartments, which typically do not allow pets. Which is exactly why Seoulites head to dog cafés like Bau House in Hapjeong. This well-known dog café is divided into two sections – small dogs and large dogs – where approximately 20 resident canines interact with visitors. Upon entering, purchase a beverage, and you’ll be given a dog directory complete with the names, ages, and breeds of all the dogs in attendance. In addition to delivering a whole lot of TLC to the pups, the Bau House staff also ensures that the café remains comfortable and clean for all.
Open In Google Maps
394-44 Seogyo-dong, Mapo-gu, Seoul, South Korea
+8223345152
Visit Facebook page
Give us feedback

Cafe, Fast Food, $$$
Facebook
Email
Twitter
Pinterest
Copy link
Share
Map View
When Blind Café owner and proprietor Han Song-hee first adopted Blind Alley’s resident raccoons, they were just pups (and just rescued from getting made into fur coats). Not liking the idea of leaving them alone at home while she worked, Han began to bring them along to the café. Now, animal lovers can also enjoy the company of the furballs, along with a newly added capybara that was adopted from a zoo that recently shut down. The café is divided into two areas: the café itself and the raccoon room, which can be accessed with the purchase of a drink or by paying an admission fee. When you’re ready to interact with the raccoons, you’ll be given some feed which is to be placed on the palm of your hand. Just be sure to follow the rules outlined on the signage throughout the café, and don’t force the animals into your lap, as it could cost you a nasty bite.

Cafe, Fast Food, $$$
Facebook
Email
Twitter
Pinterest
Copy link
Share
Map View
Perhaps one of the most unusual pet cafés to make an appearance to date is Meerkat Friends, which is home to more than a dozen meerkats. Also in residence are a gang of their “friends”: a genet, a spotted mammal native to Africa that looks like a cross between a lemur and a mongoose; a wallaby, the cafe’s newest addition; an Arctic fox; a snow Bengal cat; and a few mischievous raccoons. Unlike many other pet cafés in Seoul, Meerkat Friends does not have a designated animal area. Instead, the creatures are allowed to roam about, making the café feel a bit more like, well, a zoo. Because there is no separate dining room, the café only serves bottled drinks such as iced coffee and juices for sanitation reasons. After you’ve purchased your drink, you’re given ten minutes to play with the animals. You’re also provided with a blanket, which makes it easier for the meerkats to sit in your lap.

Cat and Dog Cafe, Cafe, Fast Food, $$$
Facebook
Email
Twitter
Pinterest
Copy link
Share
Map View
When cat and dog cafés first took off, many entrepreneurs took advantage of the trend, and placed their focus on profits rather than the wellbeing of the animals. As a result, many cafés became the target of criticism and controversy, as people became aware of the situation, and ultimately had to shut down. However, a new generation of pet cafés is taking hold, with an aim to promote the ethical treatment of animals. The Galápagos is one of these cafés. Unlike many other pet cafés, the establishment does not necessarily encourage touching the animals, but rather, being present among them. High ceilings, an open interior and plenty of plants add to the café’s eco-centric theme, while animals roam freely around the space. Among them include an iguana, a squad of sugar gliders and, the café’s most representative resident, a rather lackadaisical tortoise. In addition to showcasing a collection of beautiful tropical animals, the café is also very well known for its coffee. Try the MSG Latte, which is not made with MSG but rather consists of a base of fermented coffee and sugar.
https://www.instagram.com/p/BCiP7uZGvPP/?tagged=%EA%B0%88%EB%9D%BC%ED%8C%8C%EA%B3%A0%EC%8A%A4%EC%B9%B4%ED%8E%98
Open In Google Maps
316-12 Seogang-dong, Mapo-gu, Seoul, South Korea
+827086374264
Visit Facebook page
Give us feedback

Cafe, Cat and Dog Cafe, Fast Food, $$$
Facebook
Email
Twitter
Pinterest
Copy link
Share
Map View
If you find yourself in Hongdae, be sure to hop on over to the Bunny Café, where plenty of furry fun awaits. Decked out in an ultra-feminine Alice in Wonderland theme, complete with checkered floors and bright pink everything, the café is oft-frequented by gal pals, couples, and mom-daughter duos. After putting your belongings away in a locker, sanitizing your hands, and donning an apron, you’re allowed to sit in the animal enclosure and play with the bunnies for up to an hour. There are 13 rabbits to choose from – long haired, short haired, and floppy eared. (Our personal favorite is the lionhead rabbit, which looks exactly as its name suggests it might.) For an additional 2,000 won (US$1.80), you can purchase food to feed the bunnies, which will likely keep them close for maximum snuggle time.

Cafe, Cat and Dog Cafe, Fast Food, $$$
Facebook
Email
Twitter
Pinterest
Copy link
Share
Map View
For those that prefer scales to fur, Koopet (also known as the “reptile café”) in Gangnam is the place to be. Once a traditional pet café, which permitted the touching of the resident animals, Koopet, after realizing the stress the animals had been suffering as a result, transformed into more of a store-like enterprise. Providing adoption services of a variety of reptiles, including iguanas, chameleons, frogs, snakes, and lizards, along with all the necessary equipment and amenities, Koopet is a great place to visit if you’re looking to adopt. Nevertheless, even if you aren’t looking for a new reptilian family member, you can still get an up-close look at these animals. Weekend experience programs are also held for children, allowing them to learn more about reptiles. There is also a café inside the store, but you aren’t required to buy anything to have a look around.

Cafe, Cat and Dog Cafe, Fast Food, $$$
Facebook
Email
Twitter
Pinterest
Copy link
Share
Map View
Want to play with some of the cutest felines on the peninsula? Then look no further than Gio Cat. Established in March 2006, the Hongdae institution is home to more than ten breeds of cats such as Russian Blue, Persian, Scottish Fold, and more that roam the café freely. Admission is 8,000 won (US$7.50) for adults and includes a beverage of your choice and as much kitty cuddle time as your cat-loving heart desires. Very used to human interaction, Gio Cat’s felines are usually willing to play, but make sure you wait for sleeping cats to wake up before teasing them with the provided toys.