A Solo Traveler’s Guide to Seoul 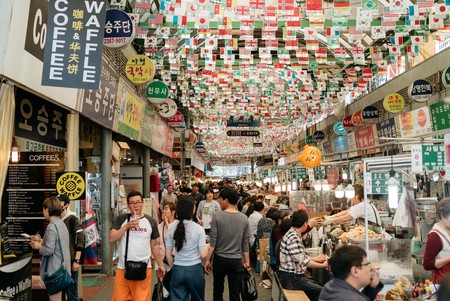 Korea’s capital city is a pulsating metropolis combining traditional Korean ideals with modern architecture and young neighborhoods. While it often stands in the shade of its bigger neighbors, Beijing and Tokyo, Seoul has become one of Asia’s hottest cities. Head there now before the crowds of visitors arrive.

Yes, this is home to the famous Gangnam Style but it’s not at all dorky as you might think. In fact, Gangnam is Seoul’s most modern district with COEX, the largest underground shopping mall in Asia, the most expensive high rises and the best plastic surgeons in town. You could spend an entire day in Gangnam and not get bored.

If you have an artistic streak, you will fall in love with Insadong. This charming neighborhood is home to local artists, teahouses, contemporary galleries, and boutiques. Insadong is the perfect location to undertake some serious souvenir shopping. 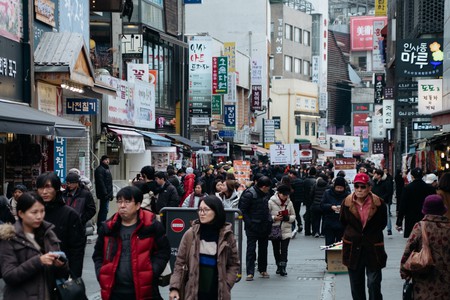 Shopaholics will faint when seeing the seemingly endless arrangement of shops in this part of Seoul. Have you watched any Korean dramas? If so, then Myeongdong will certainly look familiar. Home to Korea’s largest department stores, such as Lotte and Hyundai, foreign shopping lovers can purchase duty-free goods at the many high-end brands. In the evening, many visitors like to head to the Myeongdong to grab a bite at one of the many local restaurants.

Most tourists instantly feel at home when they are in Itaewon. No wonder because this part of town is Seoul’s multicultural district home to a vibrant expat community. If you need a break from Korean food, this is the place to find impeccable international restaurants. On top of that, Itaewon also offers vibrant nightlife with countless bars and pubs open until the early morning hours.

This university neighborhood is where the cool kids hang out. Home to four big schools, Hongik, Yonsei, Sogang, and Ehwa, it’s no surprise that Hongdae is the best place to look for quirky eats, cheap shopping, and thrilling nightlife. Have you heard about Korea’s themed cafes? This is where the idea was born. One of the most popular ones to visit in the area is the Hello Kitty cafe, for instance.

Located in the heart of Seoul, The Shilla is said to be the city’s most sophisticated hotel. In January 2008, Travel&Leisure chose the hotel to be part of their top 500 hotels in the world. According to The Shilla site, the hotel puts great emphasis on “the harmony and beauty of modernism and tradition”. There are two Presidential Suites, a fitness center with a digital body measure device and a wellness area.

Located only a short taxi drive from Gimpo International Airport, SR Hotel is a popular choice for people having to catch an early flight. On top of that, the hotel features 14 uniquely designed room types, so there is something for everyones preference and budgets. The staff is multilingual and room service offers impeccable Korean and international cuisine.

For a more affordable option, Hotel Maui in Seoul’s Dongdaemun area is a popular choice. The welcoming terrace is a great place to relax in between busy sightseeing trips. Walk for approximately 15 minutes and you will reach Dongdaemun Design Plaza, one of Seoul’s most active areas and home to the bi-annual Seoul Fashion Week.

Where to Eat & Drink

Korean food is flavorful, spicy and varies depending on what region you find yourself in. The good thing is, in Seoul, you can have it all. Whether you are a meat lover, vegetarian or have a sweet tooth, Seoul fulfills your foodie dreams.

Koreans love their version of BBQ. It’s more than just food to them, as it means socializing and drinking. One of the best places to grab some galbi (meat), is Sutbul Mapo Galbi. This family owned place is famous for its marinated beef and pork and is one of the only places in town that uses plums in their marinade giving the meat a sweet taste.

Even though Korean cuisine is relatively meat heavy, vegetarians won’t starve. One of the top addresses for first class veggie food is Sanchon. This restaurant was founded by a Buddhist monk and offers set meals with over 20 dishes prepared according to Buddhist standards.

Dessert lovers will find a true wonderland in Seoul. The city offers thousands of cafes and dessert shops ready to serve you with the quirkiest sugar creations they can come up with. Cafe Bora is no exception. This Seoul cafe chain’s specialty is purple sweet potato ice cream and bingsu (Korean shaved ice) with sweet potato topping.

Day Trip to the DMZ

Many visitors like to get in touch with South Korea’s history. Take a day tour up to the Demilitarized Zone (DMZ) between North and South Korea, a place where the Cold War is still very much in existence. Head down the Third Infiltration Tunnel, try North Korean liquor and get a glimpse of the isolated nation.

South Koreans love hiking. That’s no wonder when looking at the staggering number of mountains and national parks located in the country. However, you don’t need to travel far outside Seoul’s city borders to climb one of Korea’s most beautiful mountains. Reaching the top of Mt. Bukhansan, you will be rewarded with breathtaking views of the city and blue skies. 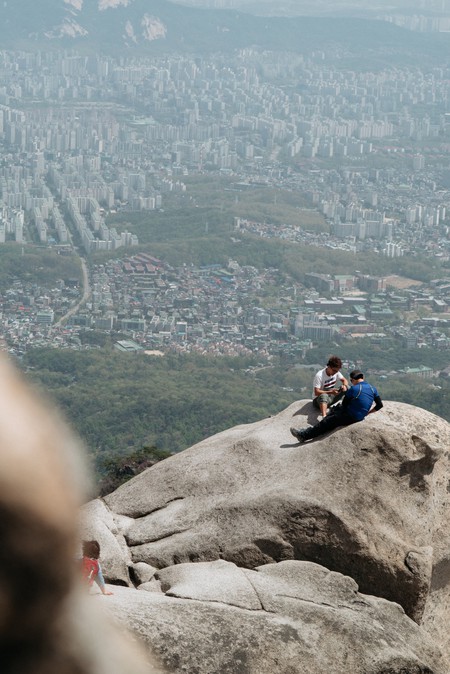 Gyeongbokgung Palace is located in the heart of the city and was used as the main palace during the Joseon Dynasty. The palace was built in 1395 and is the largest of the Five Grand Palaces of South Korea. Today, the palace is Seoul’s most visited attraction and hosts various events throughout the year. 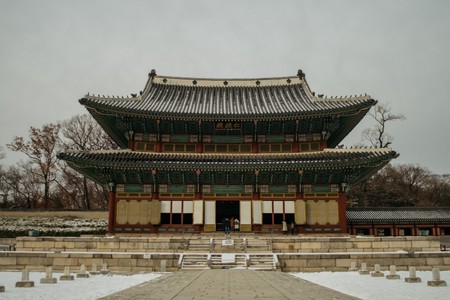 Located right next to the palace, you’ll find yourself traveling back in time at Bukchon Hanok Village featuring a collection of over 600 year old traditional Korean houses, many of which have been transformed into teahouses, coffee shops, restaurants and boutique stores. Strolling through the narrow alleys, visitors also have the unique opportunity to dress up in traditional Korean hanbok dresses for unforgettable vacation photos. 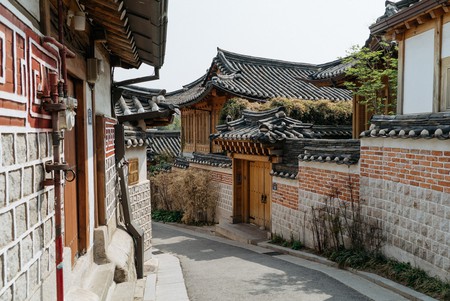 Facing Gwanghwamun, the main gate at Gyeongbokgung Palace, lies Gwanghwamun Plaza. This area offers superb photography opportunities in the evening when the sun sets in the distance behind the main gate. The square also features a large statue of King Sejong the Great of Joseon, one of the most important kings in Korean history, as he introduced the Korean hangul alphabet.

Seoul has a convenient network of subways and public buses that are affordable and easy to use. Taking certain subway lines during rush hour can be quite nerve wracking though and this might be the perfect time for you to take an Uber. Korea also has its own version of the convenient taxicab service called Kakao Taxi, which is also widely used.

It is not recommended to drink tap water in Seoul unless boiled. Do not shy away from trying street food as South Korea has a rich food culture. Locals love snacking on the go and you can best experience Korean flavors when out and about. Koreans are extremely relaxed people and it’s not uncommon to leave your camera on the table while ordering coffee or to give the waiter your cell phone to charge it for you, making South Korea a very safe place to travel.