A Look at the Royal Tombs of Korea's Joseon Dynasty 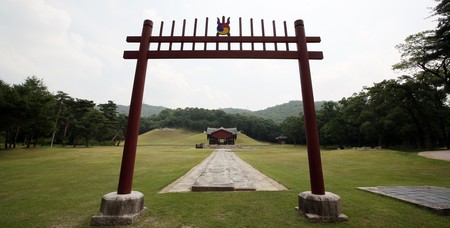 Scattered across 18 cities throughout South Korea, the 40 Tombs of the Joseon Dynasty were built to honor the memory of the period’s royalty. Beautifully preserved, the tombs are an architectural ensemble that exemplifies a significant stage in the development of burial mounds in Eastern Asia and provide unique insight into the country’s living tradition of ancestral worship. 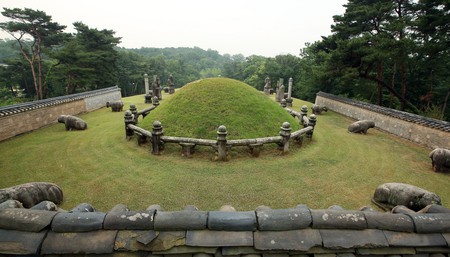 Ancestor worship has always been – and still is today – an integral part of Korean culture. In line with this, royal tombs were constructed to honor the memory of ancestors, show respect for their achievements, assert royal authority, and protect ancestral spirits from evil. Perhaps the most well-preserved of these are the Tombs of the Joseon Dynasty.

Built over five centuries beginning in the early 1400s, these magnificent graves were constructed and entombed with the kings and queens – as well as monarchs that were posthumously granted the title of king or queen – of the Joseon Dynasty (1392–1910).

As was the case for many important sites and sacred rituals, much care was taken to select the location for these tombs. According to Confucian beliefs and pungsu, or geomantic principles, it was said that tombs should be protected by a hill, as well as face south toward water and, ideally, mountain ranges in the distance. At the same time, tombs should not be positioned on a mountain or in a field, and had to be separated from other areas that were already in use by surrounding mountains or other topographical features. 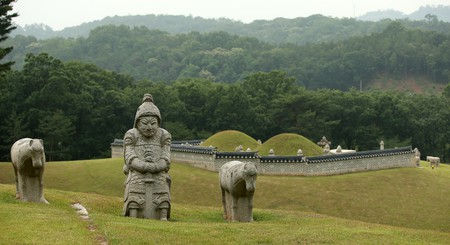 For these reasons, almost half of the royal tombs are found in or near Seoul, formally known as “Hanyang.” By being entombed in the nation’s dynastic capital, it was believed, the spirit of the kings and queens could continue to have influence on Korea’s political affairs.

In addition to the burial area, the royal tombs feature a ceremonial site and an entrance. Other structures that were an important part of the tombs include a T-shaped wooden shrine, a shed for stele, a royal kitchen, a guards’ house, a red-spiked gate, and the tomb keeper’s house. The grounds were generally ornamented with stone statues of people and animals.

The location of the royal tombs, along with their unique configuration of buildings, structures and associated elements, illustrate and support the centuries-old tradition and living practice of ancestral worship through a series of rituals that are still carried on today. During the Joseon period, state ancestral rites took place regularly, and, with the exception of periods of political turmoil in the last century, have been held annually by the Royal Family Organization and the worshipping society for each royal tomb. 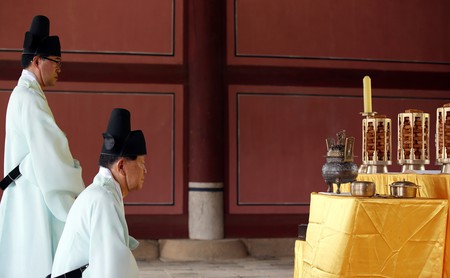 Maintaining their original function, the tombs still emanate a sacred atmosphere, especially those situated at sites outside the city. The aesthetic beauty of the Tombs of the Joseon Dynasty can also still be enjoyed, as great effort has been made to preserve them. Over the years, parts of the sites have been repaired, restored and reconstructed. The burial areas have experienced the least intervention, while the ceremonial and entrance areas have undergone the most, largely due to the fact that they use wood as a primary construction material. Meanwhile, strict legislation ensures that development within the buffer zones surrounding the tombs is controlled.

Thanks to these collective efforts, the Tombs of the Joseon Dynasty are some of the most well-preserved royal tombs in the world. Recognizing this, UNESCO appointed the areas and ancestral rites held on the sites to be World Cultural Heritage Sites in 2009. In doing so, the organization has ensured that these remarkable sites will be remembered, and that their unique beauty and cultural importance will be cherished for years to come.