A Hiker's Guide to Jeju Island 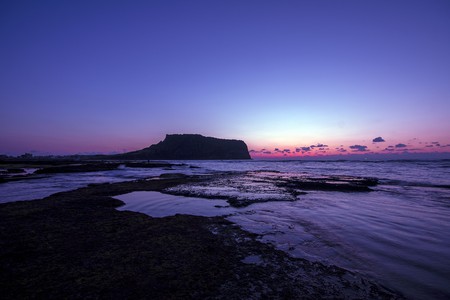 Often known for its beaches, South Korea’s Jeju Island is also a popular hiking destination, thanks to its stunning ocean scenery and well-maintained trekking paths. From hiking up Hallasan Mountain to exploring coastal trails, hikers will certainly be satisfied with the facilities the island has to offer. Check out our guide to learn more.

In the local dialect, the term “olle” refers to the narrow path between the street and one’s doorstep. Taking its name from this word, the Jeju Olle-gil is a series of walking trails that stretch around the entire coast of the island. The trails pass through small villages, beaches, farms and forests along the way. Many of which are off the beaten path and each provides a unique look into the natural and cultural beauty of Jeju.

There are 26 routes in total (21 main routes and five sub-routes). Each trail offers unparalleled views of the island scenery, and are organized by level of difficulty. The shortest route can be completed in three hours, while the longest takes up to eight. The distinct signage makes the trails easy to navigate.

Check out the Jeju Olle-gil website for more information about trails, recommended itineraries and customized routes, or download a free guide.

Tip: While the Olle-gil is free to access, trekkers have the option of taking a guided tour of the trail’s highlights. A fee of ₩80,000 won (around $70 USD) includes transportation, an English-speaking tour guide, lunch and a cultural activity in a local village. 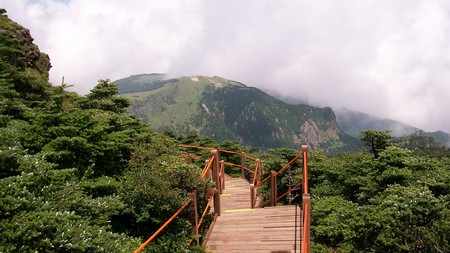 Jeju is home to 368 oreum, or volcanic cones, that dot the island’s landscape. While some are lined with pristine hiking trails, others are overgrown and off-limits to the public. The following are some of the island’s best, and are well-equipped for trekking.

Earning UNESCO designation, Geomun Oreum’s trails are beautifully maintained and span nine “dragon peaks” that tower high above the island’s lush landscape. Those seeking a bit of solitude will be happy to know that there is a limit to 300 hikers per day, which is strictly enforced on a reservation basis. The pristine trail takes about four hours to trek and takes visitors through deciduous broad-leaved and evergreen broad-leaved forests that are breeding grounds for local and migratory birds. 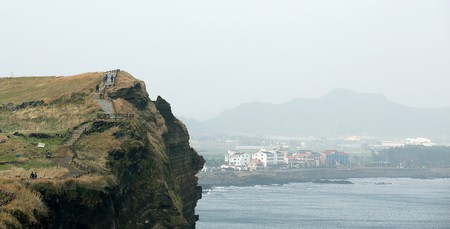 Known as “Sunrise Peak,” Seongsan Ilchulbong is yet another UNESCO site and was recently named one of the New 7 Wonders of Nature. Despite the fact that it is one of the island’s most popular tourist attractions, its geological, cultural, and historical importance should not be overlooked. It takes about 30 minutes to reach the top via stairs of varying steepness, where visitors are treated to spectacular views of the oreum’s massive crater and the sea beyond it. It’s especially breathtaking at sunrise (as its name implies), but you’ll want to arrive extra early to beat the crowds.

Tip: Don’t miss the opportunity to see the famous haenyeo female divers on the beach on the eastern side of Ilchulbong. Visitors can purchase seafood from the restaurant there, as well as witness a performance by the women – many of whom are in their sixties – at 1:30 and 3pm.

Perhaps one of the island’s most recognizable features, Sanbangsan Mountain towers high above the city of Daejeong on the southwestern coast. The mountain is actually a huge body of lava that was the result of violent volcanic activity that occured some 700,000 to 800,000 years ago. Today, it is home to Sanbangsa and Bomunsa Temples, which hold the relics of Buddha, as well as Sanbanggulsa Grotto which sits between the two of them. Don’t miss the cave from which the mountain takes its name, as it offers spectacular ocean views.

Tip: Bring your own hiking gear and clothing from home as outdoor equipment is far more expensive in Korea. In the case you do forget something, you’ll be able to purchase it easily. 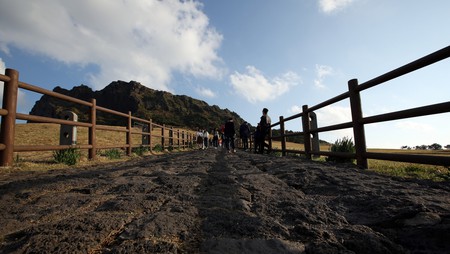 At 1,950 meters in height, Hallasan is the tallest mountain in all of South Korea and sits at the center of Jeju Island. Formed from volcanic activity, the mountain is a dormant volcano made mostly of basalt. Characterized by magnificent cliffs, steep slopes, unique rock formations, and beautiful azaleas that blanket the mountainside during the spring, Hallasan features six hiking trails that snake across its terrain. 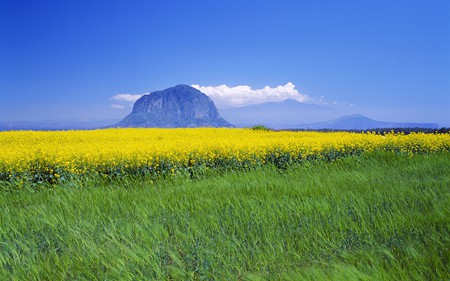 Seongpanak Trail on the eastern side and Gwaneumsa Trail on the northern end of the mountain leads all the way up to the summit, known as Baekrokdam, where an impressive crater lake is located. Those looking for a less vigorous trek should take the shorter trails that reach midway up the mountain. No longer than 10 kilometers, all trails are relatively short and can be hiked in less than a day.

Tip: Take plenty of water and your own food with you. Snacks are hard to come by and those that are sold at the mountain’s rest station are overpriced. 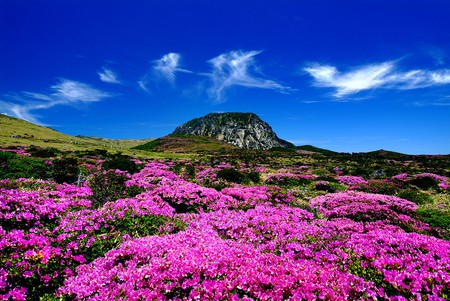 Azaleas bloom on Hallasan Mountain | © KoreaNet
Give us feedback