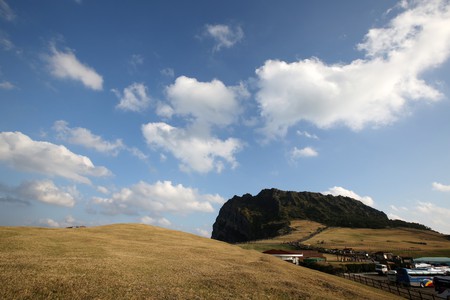 South Korea’s Seongsan Ilchulbong, also known as ‘Sunrise Peak’, is a UNESCO World Heritage site and one of Jeju Island’s most famous geographical features. Here’s what you should know before you go.

How was Seongsan Ilchulbong formed?

Seongsan Ilchulbong is a tuff cone crater, formed approximately 5,000 years ago by a volcanic eruption underneath the sea. It rises steeply up to the crater’s edge, which is encircled by a ring of sharp, jagged rocks that look like a crown. Because of the conditions present during its formation, the crater is bowl-shaped rather than filled with lava. The base of the peak and its surroundings have a dramatic landscape made of rocky outcrops, created by the volcano’s explosion. 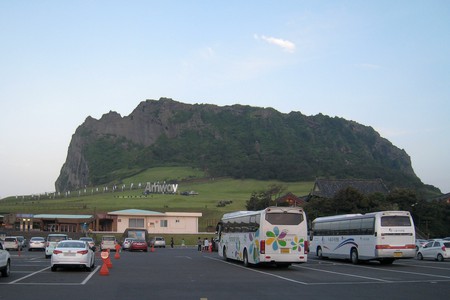 Why is it called ‘Sunrise Peak’?

The peak’s Korean name, Seongsan Ilchulbong, encompasses its two most salient features; a seongsan is a hill in the shape of a castle, and an ilchulbong is a high point with a view of beautiful sunrises. Seongsan Ilchulbong is situated on Jeju‘s eastern side, and is said to have the best view of sunrise on the island. It opens an hour before sunrise all year round, and seeing dawn break from its peak is one of the most popular activities for visitors to Jeju. Sunrise on New Year’s Day is particularly special — people gather at the peak to watch the first sunrise of the year together, and it’s said that the first people to glimpse the sun coming over the horizon will have good luck for the coming year. As it’s on Jeju’s eastern side, Sunrise Peak has the earliest dawn on the island. Since 1994, a sunrise festival has been held at Seongsan Ilchulbong, which lasts from New Year’s Eve right through the night. As dawn breaks, fishermen assembled in the ocean light up their boats and sound their whistles in unison to welcome the New Year.

How can I get there? 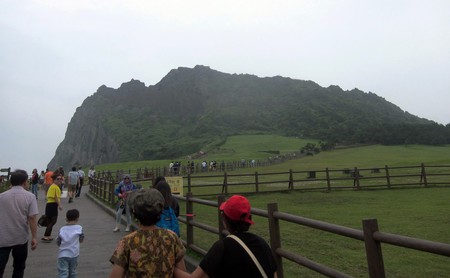 Is the hike difficult?

Although the slopes of Seongsan Ilchulbong are steep, steps have been built up the crater to ease your climb. The peak is 182 metres (600 ft) above sea level, and the hike to the top shouldn’t take you longer than 45 minutes. There are frequent rest stops and benches that look out over the sea, especially on the ascending pathway.

How much does entrance to the peak cost?

You do have to pay to ascend Seongsan Ilchulbong; however, entry is a very wallet-friendly 2,000 won for adults and 1,000 won for children (US$1.80/$0.90), and goes towards keeping the trails impeccably maintained. There is free parking for those who choose to drive.