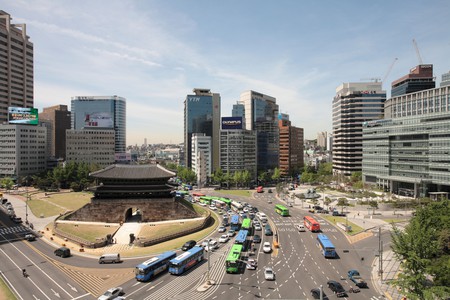 Namdaemun is the largest of Seoul’s traditional markets and is known for its diverse and expansive inventory of wares. Perhaps its biggest draw, though, is its frenetic food streets that offer visitors a truly authentic taste of Korea. Grab your chopsticks and get ready to gorge on the best the market has to offer.

Bustling, boisterous and bursting with energy, Namdaemun Market is worlds away from the glisten and gleam of Seoul’s contemporary cityscape. 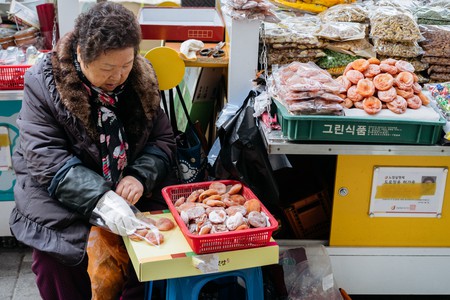 Here, vendors eager to make a sale hawk the health benefits of their healing ginseng tinctures while colourfully clad housewives frantically dig through piles of clothing and kitchen goods seeking the best bargains.

Balancing towers of tableware atop their heads, restaurant owners gracefully navigate the maelstrom of handcarts zipping through the market’s veritable maze of more than 10,000 shops. 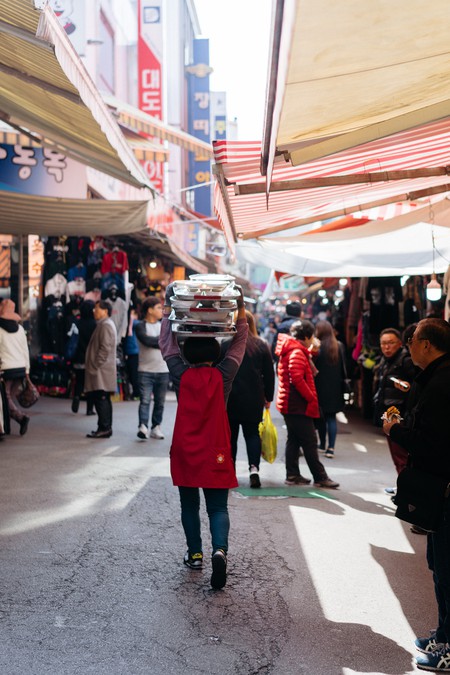 Workers seated shoulder to shoulder at a food stall tuck into steamy bowls of noodles, while spicy-sweet aromas hang in the air and the sound of cooking pajeon (savoury pancakes) sizzles nearby.

A taste of the past

It’s a scene seemingly plucked from the pages of Korea’s distant past. And, in a way, the atmosphere and energy of the Namdaemun Market of today is likely not too different to how it was centuries ago, when it was first established as a fish market. This is because Namdaemun Market, like most Korean markets, has for the entirety of its existence been a space where locals go to shop, and also where friends and neighbours come together to share the latest gossip over a bite to eat. 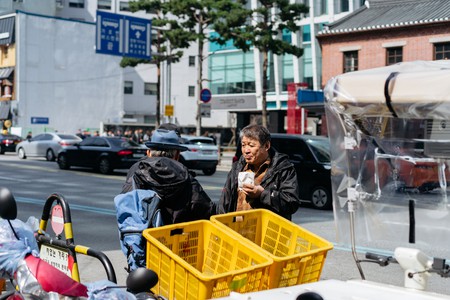 While not as prolific as they once were – mainly due to modernisation and the propagation of supermarkets – traditional markets like Namdaemun continue to play an important role as communal gathering spaces and have flourished in recent years due to an increased interest in Korean culture and cuisine.

A feast for the eyes – and stomach

Offering a mix of both, Namdaemun Market has become a particularly popular destination among foodies drawn to the sights, smells and flavours of its sprawling food streets. Among them, three are not to be missed: Foodie Alley, a stretch of vendors offering classic Korean staples and street-food favourites; Kalguksu Alley, a street comprised of restaurants specialising in hand-cut noodles and Galchi Jorim, a road dedicated to braised hairtail fish stew, a dish invented at the market. 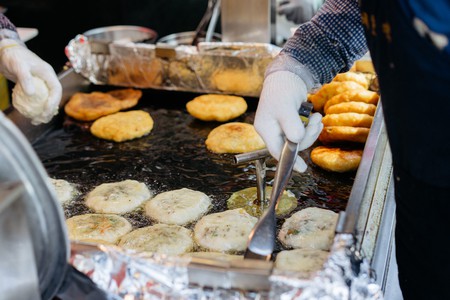 No visit to Namdaemun Market is complete without trying at least one of its specialties, and it’s recommended to visit between 11am and 2pm on a weekday during the lunch rush. Sure, it’s crowded and chaotic, but it’s this very commotion that completes the Namdaemun experience. Furthermore, the food is guaranteed to be fresh and tasting its best because of the high turnover of diners. 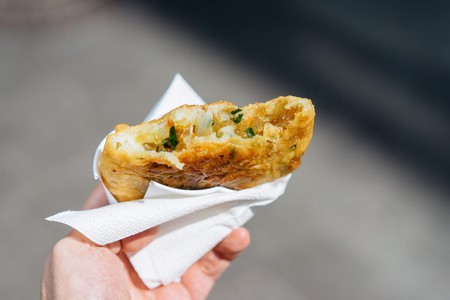 Situated near Gate 6 is Kalguksu Alley, a small cluster of vendors specialising in kalguksu (handmade, knife-cut noodles in a steamy, savoury broth). Traditionally considered a summertime dish, it makes a hearty meal in the colder months, too. 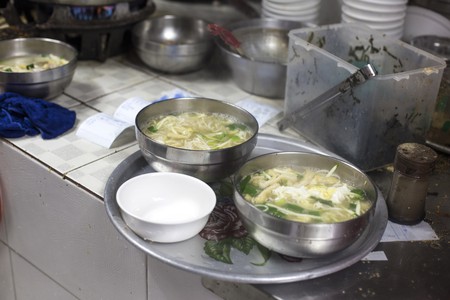 Geography plays a significant role in the preparation of kalguksu. Near the ocean, you’ll find a mix of seafood ingredients, while in farming communities, pumpkin is a common addition. At Namdaemun Market, the broth is made by simmering anchovies, shellfish and various vegetables together for hours on end, a process that results in a complex flavour that is simultaneously oceanic and earthy. The soup is then topped with fried tofu, dried seaweed and sesame seeds.

The menus and prices are the same for every restaurant in the alley; therefore, focus more on securing a spot – seating gets competitive during the lunch hour – than trying to decode each menu. 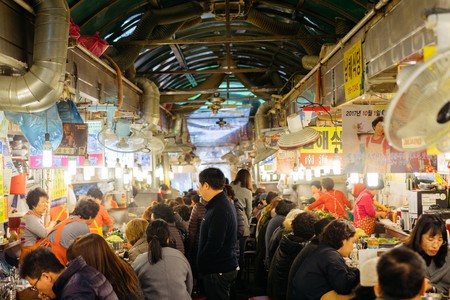 About 6,000 Korean won (£3.85) will get you a big bowl of kalguksu along with a generous serving of complimentary banchan (side dishes) including a hearty portion of bibim naengmyeon (spicy buckwheat noodles).

When your food arrives, do as the locals do. Savor the broth first and then add a dollop of gochujang (red pepper paste) if you prefer a bit of heat. Next, turn your attention to the star of the show: chewy noodles handmade from a simple mixture of flour and egg. And don’t be afraid to slurp! This Western etiquette faux pas is not only tolerated in Korean culture, it’s encouraged, as it’s said to cool the soup and make it taste better, too. 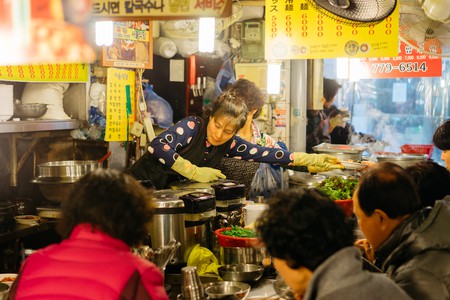 Before becoming Galchi Jorim Alley, this specialty food street was known for its variety of fish-based dishes. However, in the 1980s, one vendor began serving up galchi jorim, a stew made of flaky braised hairtail (also known as beltfish) in a pungent red gravy. Word-of-mouth about the delicious creation quickly secured the restaurant a cult following; it didn’t take long for a number of copycat shops hoping to get a piece of the action to take root – and take over the alley. 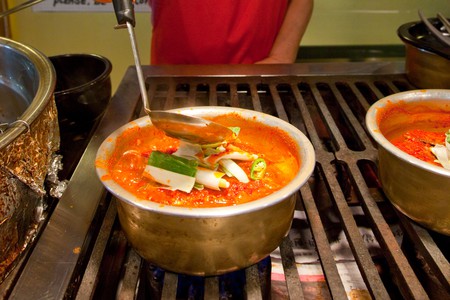 While each of the vendors in the corridor serves inarguably good food, Joongang Sikdang, the originators of the dish, remains the crowd favourite. According to the founder’s daughter, the restaurant sources its quality hairtail primarily from Yeosu, Mokpo and Jeju Island. The highly regarded sauce is made by marinating a secret combination of more than 20 spices, sauces and other ingredients for an entire day before being simmered. 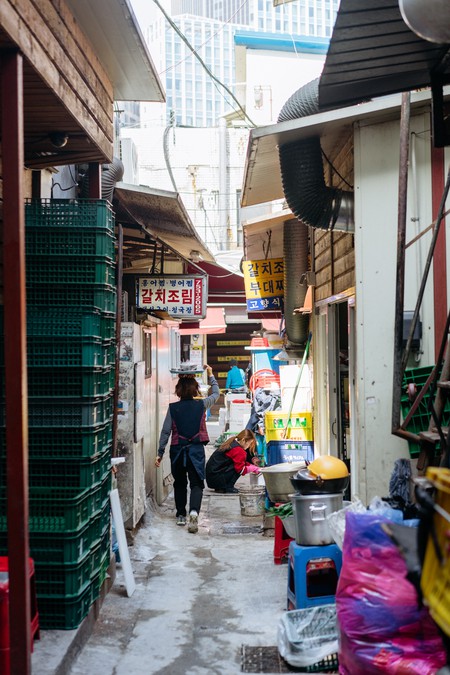 Served in a well-seasoned stained pot with chunks of stewed radish and vegetables, the final result is a dish that is modest in appearance but big on flavour. The hairtail is soft and tender, without being overly fishy. And, while the fiery sauce may look intimidating, it’s more savoury than spicy, especially when consumed with the accompanying rice and side dishes. Expect to pay around 8,000 won (£5.15) for the spread.

Other dishes worth trying are the fluffy gaeran jjim (steamed eggs) and samchi gui (grilled fish), both equally appetising and affordable. 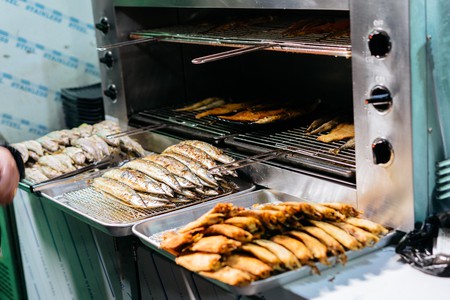 Street food has a long history in Korea, but it played an especially important role during and in the years following the Korean War, when many people living in poverty relied on the affordable meals served at market stalls to survive.

One such dish was soondae (blood sausage). Historically a delicacy made by stuffing ground meats into cow and pig intestines, the post-war version used cheaper ingredients, replacing meats with cellophane noodles. No part of the animal went to waste; organs of all kind were boiled and served alongside the sausage. 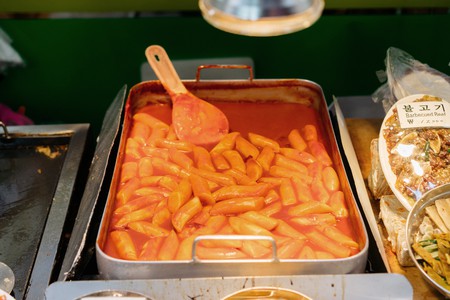 It’s famine foods like this one that remain the most beloved street eats of today, and make up the bulk of the dishes on offer at Namdaemun Market’s Foodie Alley, a continuation of Galchi Jorim Alley.

Here, you can stuff yourself with comfort foods such as tteokbokki (glutinous rice cakes in a spicy red sauce); dakkochi (grilled chicken skewers) and cobs of chewy, sweet corn. More adventurous eaters will delight in options like jokbal (pigs feet that are to be eaten right from the plastic bag they’re served in). 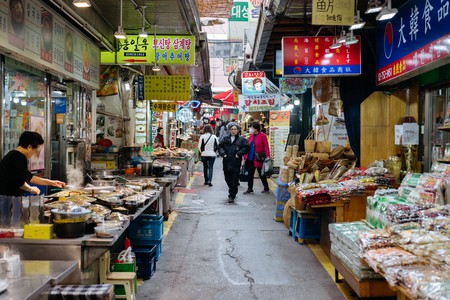 If you’re feeling particularly daring, head to the live seafood area for a plate of sannakji (still-moving octopus tentacles that wriggle and stick to your tongue as you chew). While the dish itself might be rather bland in flavour, it’s a quintessential market experience that won’t soon be forgotten.