7 Korean Eats to Keep You Cool This Summer 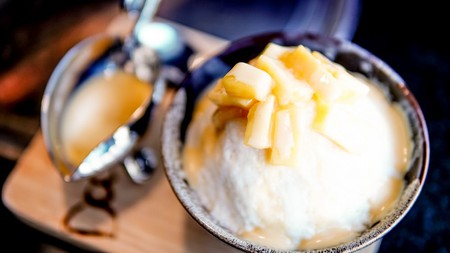 Summer in Korea can get uncomfortably hot, but despite the unpleasantness of its high temperatures and ever-present humidity, there are several summertime dishes that help make the heat a bit more tolerable. Whether you’re in the mood for a chilled, savory entrée or a refreshing frozen dessert, these seven Korean eats and treats are sure to keep you cool.

Appealing to Korea’s enormous sweet tooth, this popular dessert is served in countless restaurants across the peninsula. The shaved ice treat is traditionally topped with sweetened red beans, chewy rice cakes, and condensed milk, but more modern interpretations of bingsu include everything from fine chocolate and green tea ice cream to chunks of mango and fresh strawberries.

When days get particularly hot, Koreans turn to naengmyeon, or cold noodles, to cool down. Consisting of long buckwheat or sweet potato noodles served in an icy chicken or beef stock, naengmyeon is often topped with sliced cucumber, Asian pear, and radish to not only make it more cooling but also to enhance the flavors and texture of the dish. Add a dollop of gochujang (spicy red pepper paste) and a squeeze of vinegar and mustard and you’ve got yourself a solid lunch. (Insider tip: Use the provided scissors to cut the noodles to make them easier to chew.) 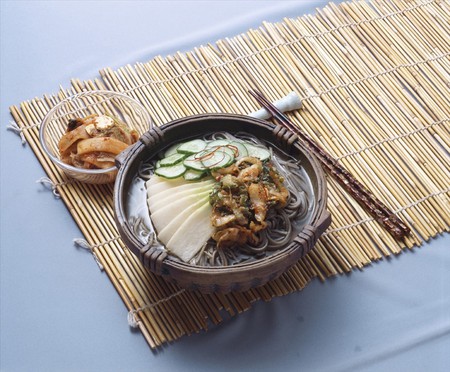 Arguably one of the best summertime vegetables due to its high water content, cucumbers are the main ingredient of oi-muchim, a chilled, spicy salad often served as a side dish in many Korean restaurants. Marinated in vinegar and red chili flakes, the subtle flavors and crisp texture of the cucumber make the dish both delicious and refreshing.

Literally translating to “chicken and beer,” chimaek is the quintessential summer snack, and is best enjoyed on a restaurant patio or along the Han River (where it can actually be delivered directly to your picnic spot). Korea’s famous twice-fried chicken (which has an entire festival devoted to it) is usually served with a side of radish cubes, which help to neutralize the heat of the chicken. Between the crunchy, crisp radishes and the ice-cold Cass, you’ll keep cool no matter how high the temperatures rise. 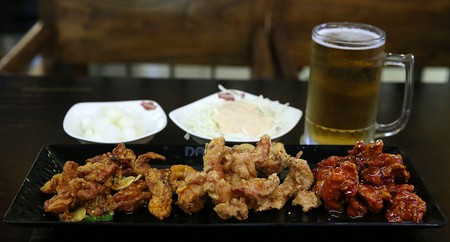 Chimaek, or chicken and beer, is a favorite Korean summer snack | © KoreaNet / WikiCommons

Another favorite summer dish – particularly among vegetarians – is kongguksu, hand-cut noodles served in a cold, thick broth made from soybeans. Popular variations incorporate cucumber and peanuts, and if you’re eating it on an especially sweltering day, ice cubes may be included, too. Add salt to taste.

Sold in convenience stores and supermarkets alike, Korean ice cream bars are as ubiquitous as they are delicious. While Korea offers all the standard ice cream flavors, there are also countless inventive varieties for the more adventurous eater. Melona bars, for example, are a creamy, refreshing treat of honeydew melon-flavored ice cream. The Samanco, meanwhile, is a goldfish-shaped rice wafer filled with vanilla ice cream and a layer of sweetened red beans, and is unsurprisingly a favorite among children and children at heart. At around 1,000 won (US$1) a pop, you can try multiple kinds without breaking the bank, though not necessarily the scale. 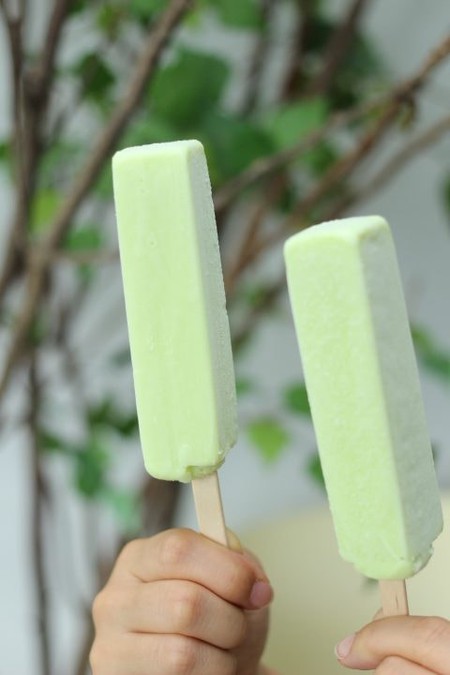 Koreans have a theory that during the three hottest days of the summer – chobok, jungbok, and malbok – the best way to fight the heat is with more heat, which is where samgyetang (ginseng chicken soup) comes into play. The nutritious soup features a whole chicken simmering in hot broth and stuffed with various nuts, medicinal herbs, and vegetables – a culinary combination that is said to increase blood circulation in the body and thus help restore appetite and energy.