6 Things to See and Do in Andong, South Korea’s Culture Capital 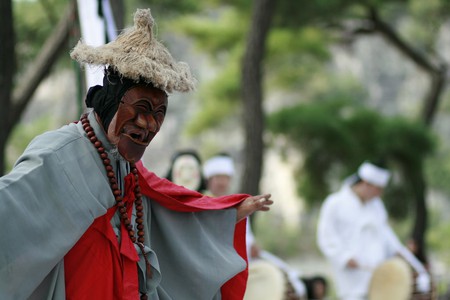 Known as the birthplace of soju, wooden masks, and Confucianism in Korea, and proudly anchored in the country’s illustrious past, the city of Andong provides visitors with the unique opportunity to experience Joseon-era rural life. From sampling regional specialties to participating in folk dances, here’s everything you should do and see to get the most out of your trip to the capital of Korea’s traditional culture.

Sleep in a traditional house

Of the city’s attractions, the UNESCO-listed Hahoe Folk Village is Andong’s biggest draw. Dating back some 600 years, the village is home to the descendants of the Ryu clan of Pungsan and is widely known as the birthplace of multiple renowned Joseon-era scholars. 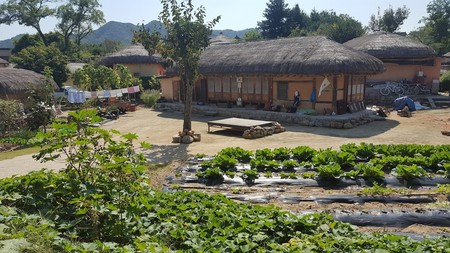 Today, it is a popular destination thanks to the beautifully preserved choga (traditional houses with straw-thatched roofs) that make up the village, as well as the age-old customs that are upheld by the residents that live in them. Although the homes now have modern amenities (such as electricity and cable), they continue to provide a peek into South Korea’s not-so-distant rural past.

In addition to touring the homes, restaurants, and workshops of this quaint village, guests can also sleep here, too. There are several guesthouses, home stays, and boutique hotels that invite visitors to enjoy this unique cultural experience, with the most famous guest of honor being Queen Elizabeth II, who celebrated her 73rd birthday here in 1999. 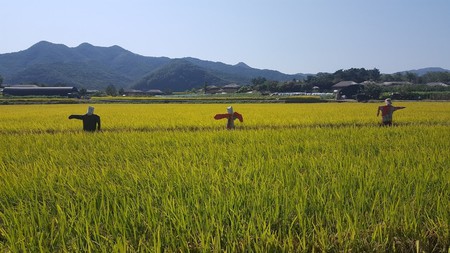 Take a shot of soju

Korea’s infamous soju – the local firewater that is often the main attraction of company dinners and outings with friends – was born in the 13th century when Mongol invaders brought arak’s distillation methods to the Andong region. Traditional soju is to this day produced in Andong, and unlike the cheap, ubiquitous green bottles made from diluted ethanol produced from sweet potatoes, this regional specialty is created using a blend of fermented and distilled rice and grains.

It can be ordered with your meal at restaurants throughout Andong or purchased at one of the city’s souvenir shops. There’s even an Andong Soju Museum dedicated to the stuff, where visitors can explore the beverage’s history, production process, and associated traditions, as well as get hands on in the sampling section. But do be warned, this stuff packs a punch and will have you feeling tipsy in no time so drink responsibly. 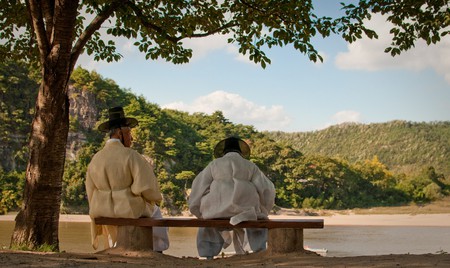 Located at the foothills of Hwasan Mountain, Hahoe Village boasts a number of exquisite scenic sights. In fact, its name translates to ‘Village Enveloped by Water,’ referring to the Nakdong River which flows around the perimeter of the town.

To experience Andong in all its natural beauty, take a ferry from the village across the river to Buyongdae. This 64-meter-high cliff is easily accessible and offers a bird’s eye view of the traditional homes of Haehoe Village below. 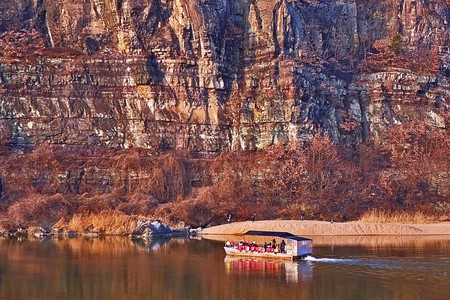 Often associated with Korea’s iconic wooden masks, Andong is also home to the Maskdance Festival, which is held every September or October to celebrate the city’s folk traditions including talchum, a form of storytelling through dance in which the participants wear masks.

Deeply rooted in the country’s heritage of shamanism, the mask dance marries religious rites, entertainment, and social satire. Villagers used the dances to mock lascivious monks, corrupt statesmen, and other aspects of society they took issue with. The Maskdance Festival provides visitors with the unique opportunity to see not only Andong’s version of the mask dance, but also those of other regions of Korea and countries around the world.

Ahead of the festival, stop by the Hahoe Mask Museum, where you can get a better understanding of the time-honored Korean masks, as well as the storylines of the various mask dances. 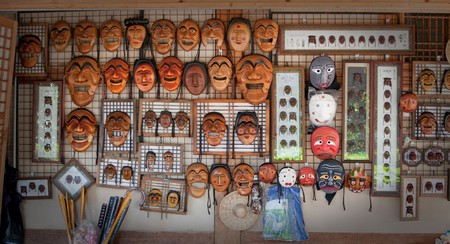 Andong has no shortage of regional culinary specialties, including gan godeungeo (salted mackerel) and heotjesabap (various funerary foods) but its real gastronomic gem is jjimdalk, a braised chicken and vegetable stew served with cellophane noodles in a soy sauce-based broth. The slurp-worthy sauce is a perfect mix of savory and spicy that promises to have you eating your way into a food coma.

Sample the dish at the Andong Market at the center of town, where dozens of restaurateurs serve up the specialty, each refining the ingredients to their own versions of perfection. Andong Jjimdalk Jongson, one of the oldest restaurants in the area and situated near the entrance of the market, is a good place to try the traditional dish. 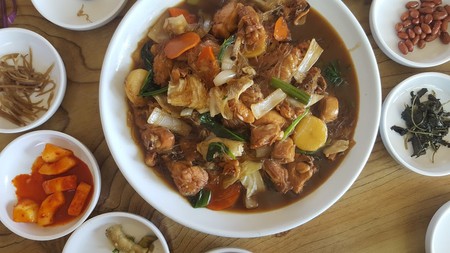 Get spiritual at Bongjeongsa Temple

While the majority of the city’s tourist attractions are associated with the Confucian Joseon Dynasty, Bongjeongsa Temple dates back to the preceding Goryeo Dynasty, an era when Buddhism was the country’s primary religion.

Don’t miss Geungnakjeon (or ‘Nirvana Hall’), Korea’s oldest surviving wooden building. In addition to this structure, the temple also boasts a number of interesting architectural works from the early and mid-Joseon era. A particularly noteworthy area of interest is Yeongsanam, a 19th-century hermitage situated just outside the main temple.

From Cheongnyangni Station, seven trains run daily between 9:00 a.m. and 9:00 p.m., while one train runs daily from Seoul Station. Travel time is four to five hours. For faster transport, take bus #13 from Dong Seoul Bus Terminal, which operates from 6:20 a.m. to 6:30 p.m. Travel time is about four hours.