13 Korean Fashion Designers Guaranteed to Be the next Big Thing 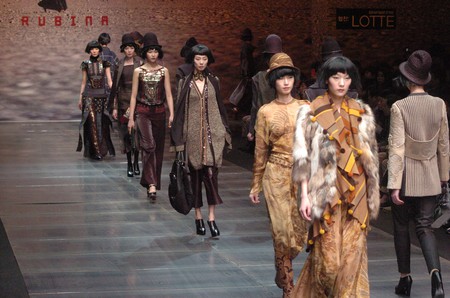 South Korea has raked in billions from its pop-cultural exports to the West; its music, television, film, technology, and beauty exports have spawned some of the most influential cultural trends in the world today. Now, Korean fashion is taking to the global stage. These 13 emerging Korean designers are quickly making a name for themselves in fashion circles both domestically and abroad.

When Hyein Seo was just 23 and still a student at the renowned Royal Academy of Fine Arts in Antwerp, Belgium, she was invited to present her first collection at New York Fashion Week. It was here that international superstar Rihanna took note of her work and instantly became a fan, helping to make the “School Kills” t-shirt one of Seo’s signature items. Incorporating iconic references from adolescence with a streetwear aesthetic and a touch of rebellion, her clothing is a perfect fit for millennials.

Seoul-based, Korean-American designer duo Terrence and Kevin Kim have long been influenced by their heritage. This is beautifully translated in their brand IISE, which features various streetwear items ranging from clothing to bags. Each piece is made in Seoul, utilizing a combination of Korean fabrics, techniques and a mix of both contemporary trends and traditional designs.

In 2013, Hee Jin Kim launched her namesake label, Kimmy J, as a monochrome womenswear line featuring black, punk-inspired separates, such as mini-skirts and pleather tops. While the materials and silhouettes have remained the same, the line has since grown to include menswear, not to mention a livelier color palette. Kim reportedly gets her inspiration from observing society and attempts to translate a different philosophical idea into her designs each season.

Perhaps no designer is more passionate about reviving the hanbok, Korea’s traditional dress, than Leesle Hwang, the founder and CEO of casual hanbok brand Leesle. It was around a decade ago that she designed a hanbok for an event, which was a hit with attendees. Recognizing the fast-growing interest in modern interpretations of traditional Korean clothes, she established an online shop that has since grown into a wildly popular brand. Still in her 20s, Leesle continues to make a name for herself, and was recently even featured in Vogue.

Quirky and colorful, Kathleen Kye’s designs are known for eye-catching contrasts and are differentiated by their incorporation of street art graphics. Her most recent collections feature combinations of wacky patterns combined with shaggy fabrics, and band tees in satin and fur. They have found fans in the likes of Rihanna – who has been spotted in her blue mink coat – G-Dragon, and Dara of 2NE1.

Seoul-bred designer Younchan Chung established his brand Sirius (a name inspired by the brightest star in the night sky) immediately after graduating from fashion school, and after just a mere two seasons, won the prestigious International Fashion Showcase designer award presented by the British Fashion Council. He uses materials such as leather, lightweight wools and lustrous silks which help him achieve the futuristic yet understated elegance that his brand has become synonymous with.

Jae Hyun Kim is the Creative Director of two of Korea’s most exciting labels, Jardin de Chouette and Lucky Chouette. The former was launched as a line that focused on specially ordered, handmade creations while the latter builds upon what she does best – creating fun and funky apparel with strong yet feminine silhouettes. Lucky Chouette has quickly become a favorite label of K-pop idols, and subsequently, their adoring fans.

Noah Nam’s ultimate objective for his line Nohant, which was established in 2012, was to introduce what he refers to as the ‘brunch look.’ This aesthetic allows a person to look comfortable and stylish effortlessly while having brunch on a Sunday afternoon. His Fall 2017, Alpine-inspired unisex collection incorporates materials such as cashmere and tweed, and features warm knitted scarves, cotton sweaters, flannel patterned suits, and cozy fleece sweatshirts.

Rejina Pyo’s diverse interests are no doubt what gives her work a unique aesthetic – one that is simultaneously elegant and playful. The Korean-born, London-based designer combines graphic inspirations and unexpected colors from abstract art with a sophisticated, subtle femininity.

Prior to launching his namesake label in New York in 2012, Munsoo Kwon interned at Thom Browne, Helmut Lang and Robert Geller, and was a designer at Andrew Buckler. Known for tailored menswear filtered through the lens of youth culture, Kwon has since been in the media limelight and is frequently featured in the media by the likes of Harper’s Bazaar, Elle, and Vogue magazines.

Seung Gan Park is the founder of fashion label pushBUTTON, which derives its name from Madonna’s catchy dance hit “Hollywood.” His trademark style comes in the form of vibrant colors and playful materials. Key pieces include streetwear staples like casual sweatshirts and tees, as well as a well-tailored, ready-to-wear collection.

As a former painter, Kim Seoryong has a natural inclination for eye-catching color combinations, and is known for experimenting with rich earth tones in the well-tailored suits that he is quickly becoming famous for. Unlike his contemporaries, he has never dabbled with retailers, and prefers to sell his designs directly in his showroom through in-person appointments so he can better engage with his customers.