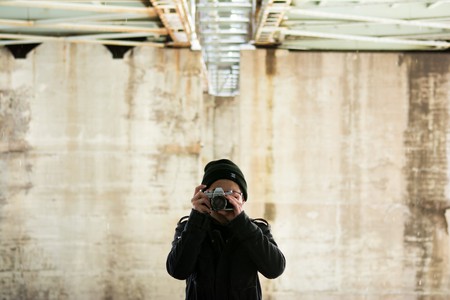 Photography-based works have become increasingly prevalent in contemporary South Korean art. Creative, daring, and honest, Korean photographers push the envelope to reveal how their nation’s society has and continues to transform in a time of global economic success. Featuring themes of sexuality, beauty ideals, and societal turmoil, the works of the following artists are worth a closer look.

More commonly known by his moniker “Less”, Kim Tae Kyun is a fashion photographer who aims to, as he puts it, “capture images that reveal and at the same time, nullify and extinguish or lessen the many boundaries between the young and the grown.” His personal work, which features close-up images of kissing couples, partying friends, and an injection of nudity, beautifully exemplifies youth culture in South Korea, and illustrates the outward-looking, progressive attitude of the quickly evolving nation. Less is also the go-to photographer for many K-Pop stars; his commissions include some of the biggest names in Hallyu such as Boa, Brown Eyed Girls, and Super Junior.

Seoul-born, New York-based Ji Yeo spent her formative years obsessed with physical appearance, hoping to one day undergo cosmetic surgery to look more Caucasian, a goal that is regrettably all too common in South Korea. It was during a medical consultation that Yeo began to understand the destructiveness of her country’s beauty ideals on the youth, which led to the idea of her “Beauty Recovering Room” series. Her images feature young women in the moments immediately following their cosmetic procedures and are a graphic commentary on ideas of vanity and how it filters down onto an impressionable youth.

Ji Yeo. Beauty Recovery Room 002, 23 years old, Seoul, South Korea, 2013. We want to give a special thanks to everyone who attended the Framing Beauty Symposium this past week and give a HUGE thanks to our guest curator Deborah Willis and visiting artists Bill Gaskins, Kalup Linzy, Omar Victor Diop, and Ji Yeo! THANK YOU! #contemporaryphotography #kaluplinzy #jiyeo #deborahwillis #omarvictordiop #billgaskins #grunwaldgallery #framingbeauty

By merging reality and fiction, Noh Suntag reflects the complicated relationship between North and South Korea, illustrating how deeply separation has permeated the daily lives of the Korean people and has subsequently distorted the societies of the two countries. Highlighting real-life themes, ranging from the military presence to ideological extremes, the artist showcases the contrasts of everyday life in the South and the North.

A post shared by ArtAsiaPacific Magazine (@artasiapacific) on Aug 4, 2016 at 3:45am PDT

Utilizing her small studio, JeeYoung Lee creates fantastic worlds that extend far beyond the confines of her walls through the formation of surreal environments – ranging from larger-than-life gameboards to dreamlike scenes – that function as theatrical backdrops to her imagination. Her resulting photographs, which often feature herself, are extremely detailed and often convey themes of identity and society. Lee’s beautifully detailed work has garnered international attention and has been exhibited around the globe in galleries such as the OPIOM Gallery and Gallery Nine 5.

Previously a model and muse for both her father and ex-boyfriend, Hasisi Park has become one of Korea’s most sought-after fashion editorial photographers. The crisp, light-filled compositions of the Seoul-based photographer and filmmaker are genuine, honest, incredibly personal and – perhaps most noticeably – outrageously bizarre.

Koo Sung Soo first landed on the radar of the photography world with his series “Magical Reality,” a unique collection of images that features candy-colored scenes from his motherland. Koo contrasts shots of an advertiser’s model of the Statue of Liberty on the rooftop of a hotel, the plush interior of a wedding chapel, and the whimsical décor of a tourist bus with delicate portraits of flowers from his “Photogenic Drawings,” which incorporate Asian traditions.

Originally a street photographer, Hein-Kuhn Oh has always had an eye for documenting people. Since sharpening his skill set, the photographer has pursued the idea of spotlighting specific groups that present a certain type of social convention created by modern-day Korean society. Oh’s projects are heavily influenced by media perceptions and generally feature young women. In particular, his “Girl’s Act” and “Cosmetic Girls” series depict the common stereotypes that are influenced by the country’s thriving entertainment industry.

Artist Crush Tuesday: Oh Hein-kuhn 🇰🇷 I actually first heard about Oh… I don't know, 4 and half hours ago? His photography instantly left an impression on me, not only for its striking subject matter, but because of his clear male voice in a discussion on the struggles of young Korean women. In his series "Girl's Act" (2005), the audience is able to view the schoolgirls in the way one would view a billboard or facade. It does not allow for the true identity to come through, but their identity is instead projected via the strategy of vision. What does this say about the struggle for a Korean identity, and perhaps what commentary does it have today on plastic surgery trends/globalisation? #contemporaryart #art #ACT #artistcrushtuesday #heinkuhnoh #girlsact #photography #photograph #asianart #koreanart #korea #artist #blackandwhite #schoolgirl #feminism #예술 #미술 #현대미술 #한국 #학생

Magnificent in their totality and balance, the photographs of Jungjin Lee introduce a self-contained world of stillness and wonder. In the same way that her photographic gaze is transforming, the artist’s images beckon the viewer into a universe where the beauty of vision becomes the primary subject matter. A differentiating factor of Lee’s work is her printing technique, which makes use of a liquid photo-sensitive emulsion brushed on Korean mulberry paper. This process, typically utilized by the Pictorialists at the turn of the last century, results in a highly textured print which further emphasizes Lee’s marriage of image and photographic intent.

Jungjin Lee – 'Everglades 21', 2014. Archival pigment print on mulberry paper, Small: 30 x 23.5 in. (ed. of 7), Large: 50 x 39 in. (ed. of 3) _ Seen as part of the show 'Everglades' at Andrew Bae Gallery (@andrewbaegallery) in Chicago. After visiting the gallery on a trip to Chicago two years ago, I was excited to visit again last month. I'm glad I did. This work is of my favorite things among what I've seen all year. _ #jungjinlee #photograph #photography #andrewbaegallery #unconventionalphotographer #crane #blackandwhite

Aston Husumu Hwang, also known as Husumu, recognizes his friends as the primary influence in his photography. The artist also considers music to be an essential part of his work, with hip-hop clubs often functioning as a common backdrop of his images. Often using his images as a reminder of the previous night’s events, Husumu captures scenes that provide gritty insight into the exciting club life led by South Korea’s youth. Furthermore, his portfolio is a portrait of the country’s widespread renunciation of its traditionally conservative ideals.

Seoul-based photographer Che Onejoon is yet another artist that focuses heavily on socio-political themes related to the divided Korean peninsula. His most famous images portray the entrances of bunkers built to prevent North Korean spies from entering the South by tunnels. Another series highlights North Korean-built monuments in African countries, which were erected as a form of cultural diplomacy.

Using a wide range of media, Yeondoo Jung focuses primarily on blending sculptures and videos to create photographs that are characterized by great warmth and present optimistic views of society. His works combine an extensive variety of stylistic approaches, ranging from straight to surreal abstract. Shortlisted for the 2011 Prix Pictet for his portraits of Korean families, Jung now has images in the collections of the Museum of Modern Art in New York and the Calder Foundation.