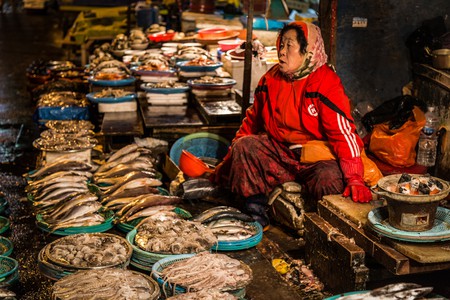 Visiting a traditional market is a must-do on a visit to South Korea, if only to experience their chaotic yet charming atmosphere. From street food to vintage clothing to oriental medicine, there’s a market for just about everyone and every need. Check out our compilation of the country’s best below. 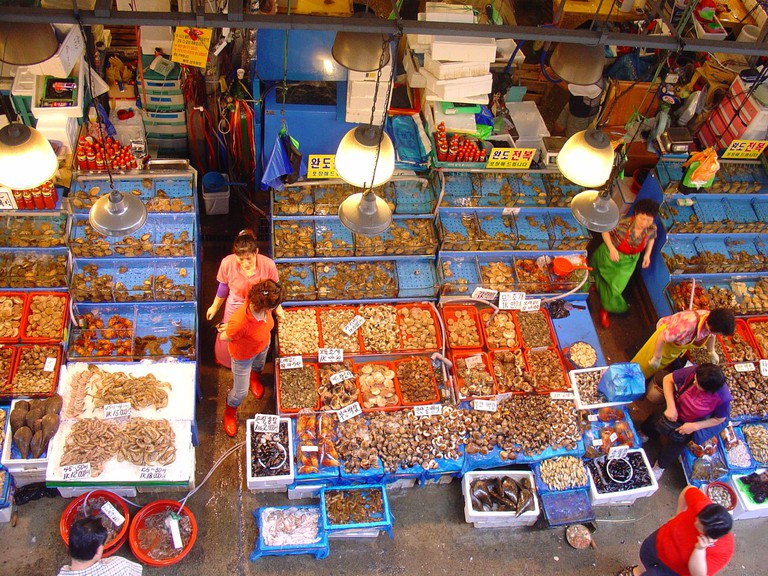 © Mandy / WikiCommons
The sights and smells at Noryangjin Fish Market, Seoul’s oldest fish market, are certain to overwhelm the senses, but are also sure to provide an experience that won’t soon be forgotten. It is open 24 hours, but the market really comes alive at night, when sea creatures of all shapes and sizes are auctioned off. Aisle after aisle bursts with a variety of fresh seafood items on display that can be purchased and prepared at one of the market’s many restaurants.
Open In Google Maps
674 Nodeul-ro, Noryangjin 1(il)-dong, Dongjak-gu 서울특별시, 156-800, South Korea
+82222548000
Visit Website
Give us feedback

Market, Farm Shop, Korean, Healthy, Vegetarian
Facebook
Email
Twitter
Pinterest
Copy link
Share
Map View
Established in 1905 in Jeonju, Korea’s food capital, Nambu Market is a spacious complex that consists of some 800 stores with more than 1,200 workers selling an eclectic selection of vegetables, fruits, food, dried fish, furniture and general goods. The best time to visit the market is on Friday and Saturday nights, when vendors set up food stalls that offer everything from bacon rolls to octopus skewers and Vietnamese pho. A trot singer planted at the center of the market keeps the mood lively and the patrons dancing.
Open In Google Maps
19-3 Pungnammun 1-gil, Jeonong 3(sam)-ga, Wansan-gu Jeonju, Jeollabuk-do, 560-043, South Korea
+82632841344
Visit Website
Give us feedback

Looking for a unique souvenir to remind you of your travels in Korea? The Seoul Folk Flea Market might just be the place to find it. Housed in the spacious yet chaotic warehouse is a vast assortment of merchandise, including vintage furniture, vinyl records, tableware, sports apparel and jewelry. Don’t expect neatly organized shop spaces here – things get hectic, especially on the weekends, and the market’s patrons are known to be a bit pushy. Even if you’re not in the mood to shop, it’s a great place to browse or eat, as it hosts a bustling food court on the first floor. 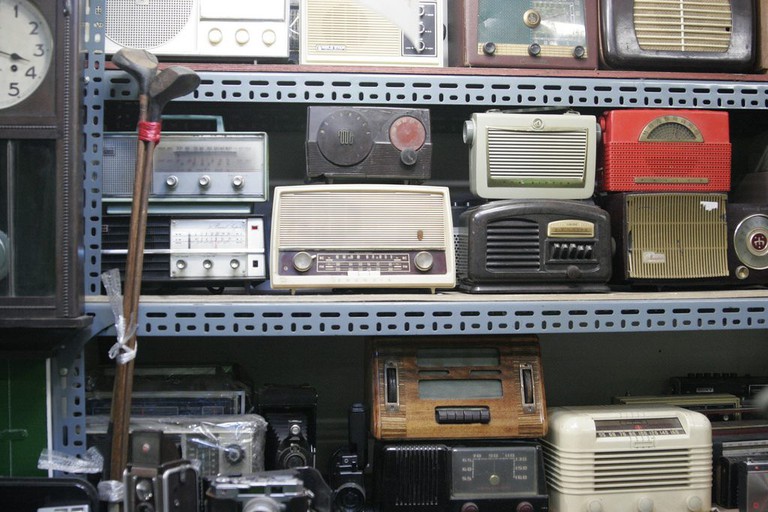 Market, Bazaar
Facebook
Email
Twitter
Pinterest
Copy link
Share
Map View
Yongsan Electronics Market is an expansive space that consists of over 20 buildings selling both new and used electronic gadgets. Shoppers will be able to check off every device on their technology wishlist: appliances, cell phones, cameras, computer parts and software. It should be noted, however, that many of the items on sale are overpriced, so be sure to bargain before handing over your cash.
Open In Google Maps
15-2 Hangangno 2(i)-ga, Yongsan-gu Seoul, 140-012, South Korea
+8227074848
Give us feedback 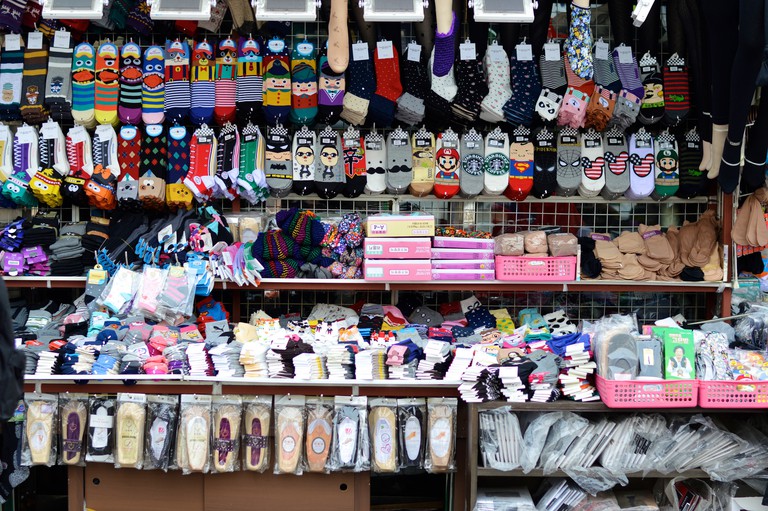 Socks at Dongdaemun Market | © Abigail Becker /Flickr
Fashion lovers should make Dongdaemun Market one of their first stops in Seoul. This fashion hub is the number one place to pick up a few of the latest designs, or buy fabric to make your own. In total, the market consists of 26 shopping malls, 30,000 specialty shops, and 50,000 manufacturers. The best time to visit is in the evening when the market really comes to life. Stores typically stay open til the wee hours of the morning, making it a great spot to experience some night shopping.
Open In Google Maps
Euljiro 6(yuk)-ga, Jung-gu Seoul, 110-126, South Korea
Visit Website
Give us feedback

Incheon | © Woogeon Choi/Flickr
Incheon’s Sinpo International Market was officially registered as a food market in 1970, but it was a popular trading site from as early as the late 19th century. As it grew over the years, it was gradually established around Sinpo, and it is now one of the most visited markets in South Korea. In Sinpo International Market, tourists can taste both traditional and trendy Korean snacks, such as spicy stir-fried chicken, tteokbokki (spicy rice cakes), and even bibimbap (vegetable rice bowl).
Open In Google Maps
11-5 Uhyeon-ro 49beon-gil, Sinpo-dong, Jung-gu Incheon, 400-080, South Korea
+82327725997
Visit Website
Give us feedback 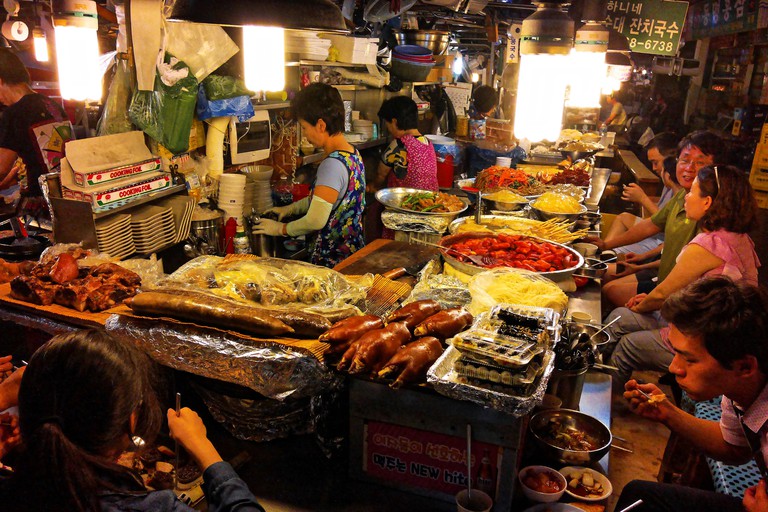 Situated just to the west of Gyeongbokgung Palace is the charming Tongin Market. While it may seem like a regular old market at first glance, it’s actually a hotspot for the popular Korean dish tteokbokki, chewy rice cakes in a spicy chili sauce. The market is also a piece of Korean history in itself, as it was established for Japanese residents in 1941 when Korea was under Japanese rule. Don’t miss the Doshirak Cafe, where for just a few bucks you can get a lunchbox to fill with whichever market snacks you’d like. 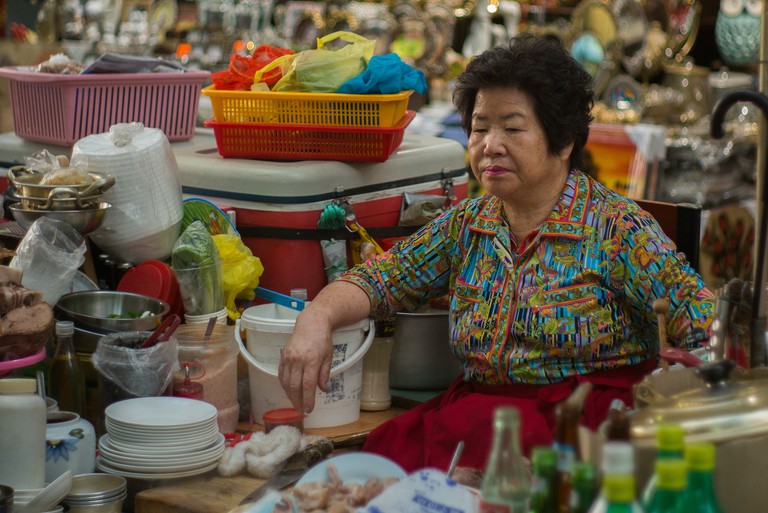 The queen of Seomun Market | © William Bright / Flickr
Seomun Market is one of Korea’s last remaining markets from the Joseon Dynasty. From hearty Korean dishes to unique street foods, it’s a popular spot with Daegu’s foodies. Its most sought-after specialties are kalguksu (knife-cut noodle soup) and nabjak mandu (flat dumplings). Servings at Seomun Market are generous and prices are affordable, so bring your appetite (and cash, as many of the dining establishments don’t accept cards).
Open In Google Maps
45 Keunjang-ro 26-gil, Daesin-dong, Jung-gu Daegu, 700-320, South Korea
+82532566341
Visit Website
Give us feedback

Market, Bazaar
Facebook
Email
Twitter
Pinterest
Copy link
Share
Map View
Gukje Market was established during the Korean War in the 1950s as a place for refugees to set up shop in order to make a living. Over the years, it grew into a thriving market and is today one of Busan’s most popular tourist attractions. The market sports a bohemian, vintage vibe with the vendors selling both new and old items at an affordable price.
Open In Google Maps
25 Gukjesijang 2-gil, Gwangbok-dong, Jung-gu Busan, 600-064, South Korea
+82512457389
Visit Website
Give us feedback

Yangnyeongsi Market is a prime spot to experience Daegu’s rich medicinal culture. Established in 1658, the market is one of the few of its kind that remains today, and almost half of Korea’s trade of medicinal herbs happens here. From roots and bugs to snakes and deer antlers, the market offers countless herbal remedies for an equally incalculable number of ailments.
Open In Google Maps
49 Dalgubeol-daero 415-gil, Seongnae 2(i)-dong, Jung-gu Daegu, 700-230, South Korea
+82532534729
Visit Website
Give us feedback 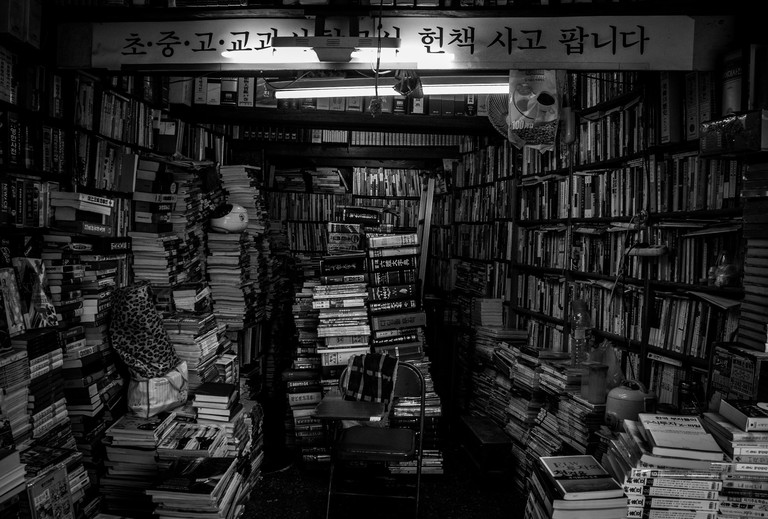 Bosu-dong Book Alley, Busan | © Han Kim / Flickr
Canopied by vivid yellow and green fabric, the seemingly endless, four-foot-wide stretch of road that makes up Bosu-dong Bookstore Alley is one of Busan’s most enchanting attractions. Here, countless used book shops open their doors to bookworms and literary enthusiasts, each boasting its own unique character and history. In fact, many of the shops date back to the years of the Korean War.
Open In Google Maps
Chaekbanggolmok-gil, Bosu-dong, Jung-gu Busan, South Korea
Give us feedback
Give us feedback