11 Korean Snacks You Should Try 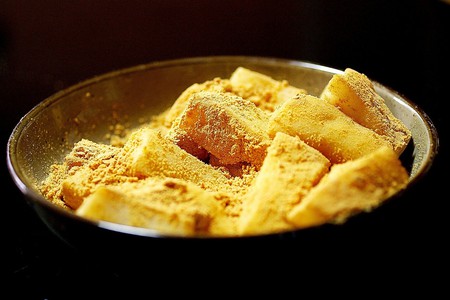 Planning to explore Seoul or Busan on foot, shop ’til you drop or hike up one of Korea’s many mountain trails? You’re going to need some energy, my friend. Luckily, Korea has no shortage of tasty snacks — here’s our guide to the best ways to stave off travel hangry-ness.

Made from thin sheets of dried, roasted and seasoned laver seaweed, gim is an ubiquitous Korean snack. It’s found everywhere from convenience stores to traditional markets, which usually sell gim in enormous multi-packs. As well as being delicious, gim has a number of health benefits — it’s low-calorie, and contains high levels of calcium, vitamins and minerals. It’s also one of the few vegan sources of vitamin B12, known for its brain-boosting properties. 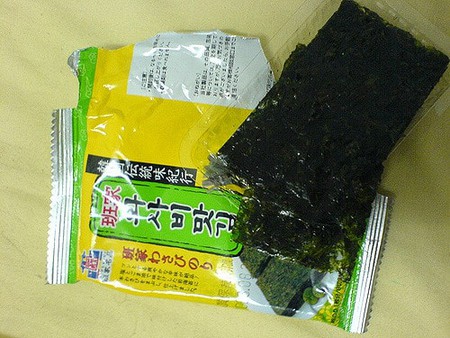 A packet of gim, cut into snack-sized portions | © Yosomono / Flickr

Salty, sweet and buttery, these potato chips are moreish and oh-so-addictive. When they debuted in 2014, the chips, made by Haitai-Calbee Confectionery Company, flew off shelves so fast that a snack ‘black market’ evolved to sate demand. ‘Honey butter’ has since become a popular flavour in Korean food, finding its way into items including beer, almonds, McDonalds fries and dried squid. The original Haitai-Calbee chips are still going strong, and can sometimes be found in seasonal ‘special edition’ flavours such as cherry blossom and maple syrup.

Similar to Japanese mochi, injeolmi are small sticky cakes made of glutinous rice flour, often covered in toppings such as sweet bean powder. They’re a popular snack that can be found in all convenience stores, and in markets (where you can expect to buy larger quantities, in a fresher form). Surprisingly filling, they’re a good bet to stave off hunger pangs on the go.

Whilst you might not think of the humble hot dog as particularly Asian, Koreans take the meaty snack to a whole new level. A number of food vendors specialise in hot dogs in various formats, from intricately cut skewers to thickly breaded and deep-fried corn dogs. Hot dogs are sold on a stick (never in a bun) and are either grilled or deep-fried. The deep-fried version can be simply covered in thick cornmeal batter, or cheese and batter. Many stalls also sell a corn ‘dog’ filled with a cylinder of firm Mozzarella cheese instead of the hot dog sausage.

Hotteok are a popular street food all over Korea. They are mouthwatering, small sweet pancakes that are deep-fried, filled with brown sugar syrup, and served piping hot. Some stalls offer a variety of fillings, including chocolate, various fruits and cream. If you visit the city of Busan, you’ll come across its specialty version, ssiat hotteok – this is liberally filled with syrup and a mix of chopped nuts and seeds. 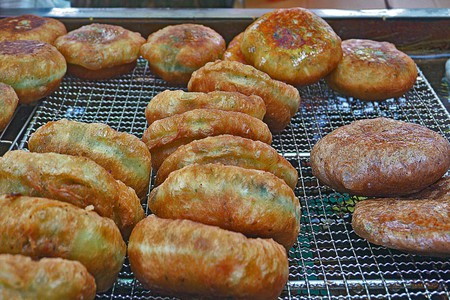 ‘Breads’ of all varieties are popular in Korea, and are mostly sweet. In a logical extension of this fondness for baked goods, the sweet sandwich is a popular Korean snack. Usually filled with sweet cream and strawberries, or with chocolate (this version is more commonly found in an uncooked-toastie-like form, with the crusts cut off), you’re more likely to find it in a convenience store than a savoury sandwich.

Gimbap, sometimes alternatively romanised as kimbap, is perhaps Korea’s number one convenience food. Like sushi rolls, it consists of various fillings squashed firmly into rice and wrapped in a sheet of dried seaweed (or gim). The easiest version to eat is samgak-gimbap, which is shaped into a triangle and sold in every convenience store in the country. 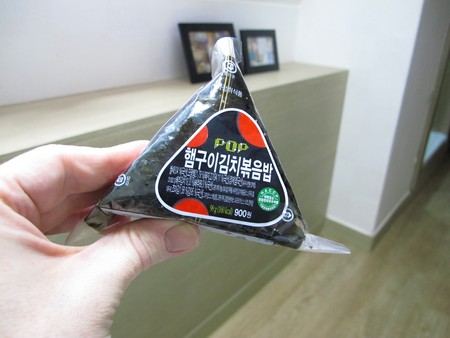 Dried squid, or ojingoechae, is similar in concept to beef jerky, or other processed meat snacks; the squid is dried, seasoned and cut into thin strips. It’s a popular accompaniment to beer or soju-drinking sessions, and can be spicy, buttery or sweet. For those who fell in love with honey butter chips, there’s even a honey butter version.

The name may sound unappetising at first, but the ‘sand’ in Lotte Sand is actually short for ‘sandwich’ — no dry-beach tastes here. Much like bourbon creams, or the ever-popular Oreos, these are crunchy cookies filled with a soft sweet filling. They come in various flavours, all with the recognisable Lotte design. Lotte is one of Korea’s biggest brands, and you’ll see its goods everywhere you go, from convenience stores to super malls. There’s even a theme park, Lotte World, in Seoul.

Sweet and surprisingly filling, you’ll see these instantly recognisable little bottles everywhere you go. They’re great for an on-the-go pick-me-up, and are one of Korea’s must-try food items. Banana milk is not only super popular, but also much-loved — look out for stickers, badges, accessories and T-shirts in Korean shops that let you proclaim your devotion to the fruity, milky drink. Other popular milk flavours include chocolate, strawberry and coffee.

If you’ve seen K-pop videos, you’ll know the Korean beauty ideal — pale, doe-eyed, and very, very slim. Fruit jellies are often touted as a way to gain that elusive body shape, as they’re low-calorie and fill you up more than liquid. They’re also super tasty, and so are the perfect food for guilt-free snacking. Find them in the fridge for a cool treat to beat Korea’s hot, humid summer weather.