10 Seafood Dishes You Must Try in Busan

South Korea’s biggest port city, Busan, has a thriving seafood industry, and tourists from all over the world flock to taste its salty wares. The city’s seafood dishes are many and varied, but there are some you can’t miss, and we’ve rounded up the most important ones. Happy eating! 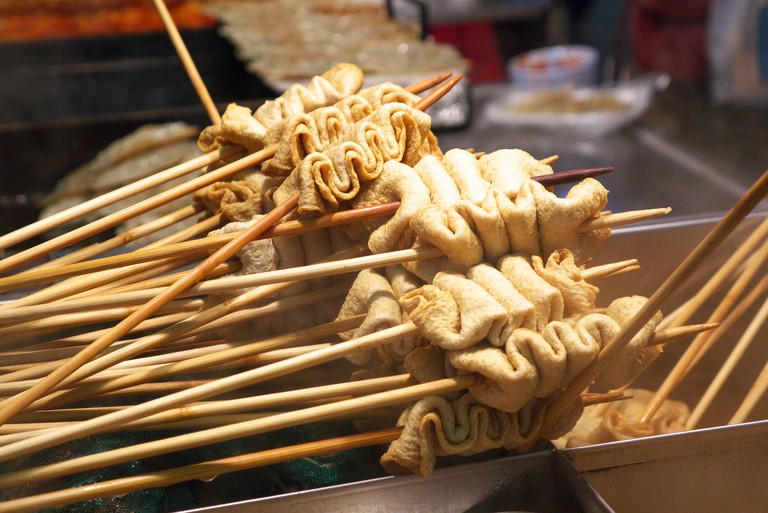 Originally brought to Korea by the Japanese, fish cakes (eomuk) are a staple of Korean food, and Busan fish cakes are particularly famous thanks to the city’s reputation for fresh seafood. Try them at almost any street food stall, or head to Samjin Fish Cake Bakery, on the second floor of Busan Station. The oldest fish cake producer still trading in Busan, Samjin sells a wide variety of different fish cakes. Eat them as a cold snack, or take them home with you. 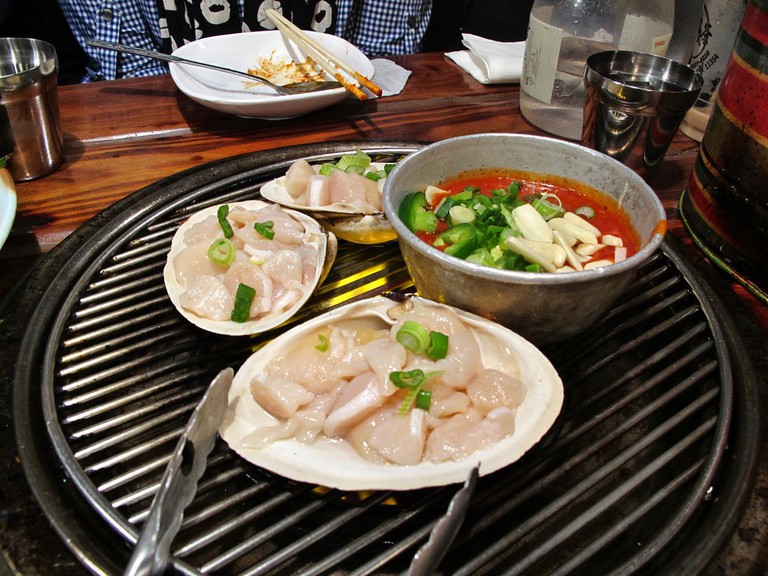 Large grilled clams | © Chun Yip So / Flickr
Jogae-gui is a mouthwatering dish made of fresh shellfish grilled at your table over an open flame, and served with a sauce made of melted butter and onions. Eating this at a beachside restaurant, the smell sizzling in the air and a glass of soju in your hand, is one of Busan’s top food experiences. One of Busan’s most famous restaurants for jogae-gui is Sumininae; tucked away in the sleepy fishing village of Cheongsapo, it specialises in jogae-gui and grilled eel (jangeo-gui). The restaurant was recently featured on a Korean television programme called VJ Special Forces, and is popular with visitors and locals alike. 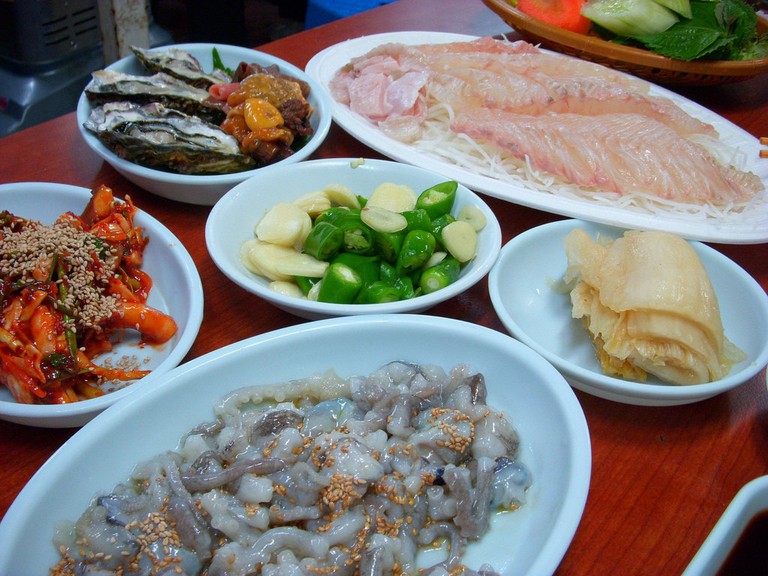 Korean-style sashimi | © LWYang / Flickr
Saengseon hwe, or Korean-style sashimi is one of the most sought after seafood dishes in Busan. One of the best places to try it in the Haeundae area is Mipomaru, a no-frills restaurant that serves up good food with amazing views. But don’t just take our word for it; the restaurant’s walls are covered with the autographs of Korean celebrities who have visited to get a taste of Busan. 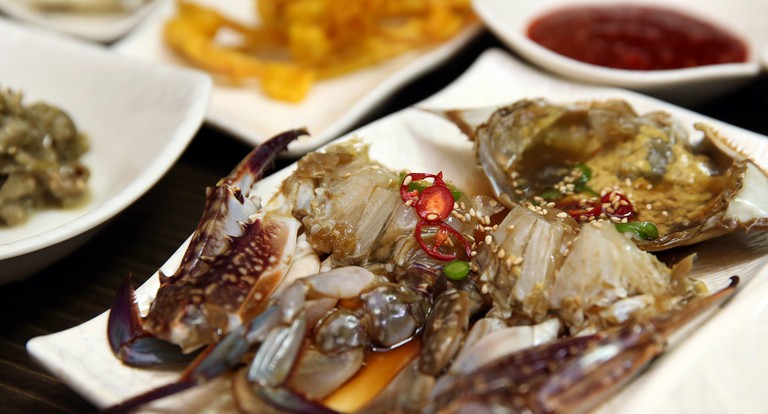 Ganjang gejang, crab marinated in soy sauce | © Republic of Korea / Flickr
Ganjang Gejang is a flavourful Korean dish made by marinating fresh raw crabs in soy sauce and vinegar for three days, giving the crab meat a tangy pungency. It’s served in the crab shell, into which diners mix rice. Once all the meat is eaten, Koreans stuff more rice into the empty shell to absorb the last traces of sauce. A number of restaurants around Busan specialise in Ganjang Gejang — a good bet is Pro Ganjang Gejang in Haeundae. Whilst it’s a little on the pricier side, it serves consistently good iterations of the dish, always made with fresh, high-quality crab. It has experience on its side; the first Pro Ganjang Gejang was first opened in Seoul in 1980. As well as its Busan branch, opened a little later, it also has restaurants in Tokyo, Osaka, Shanghai and Beijing. 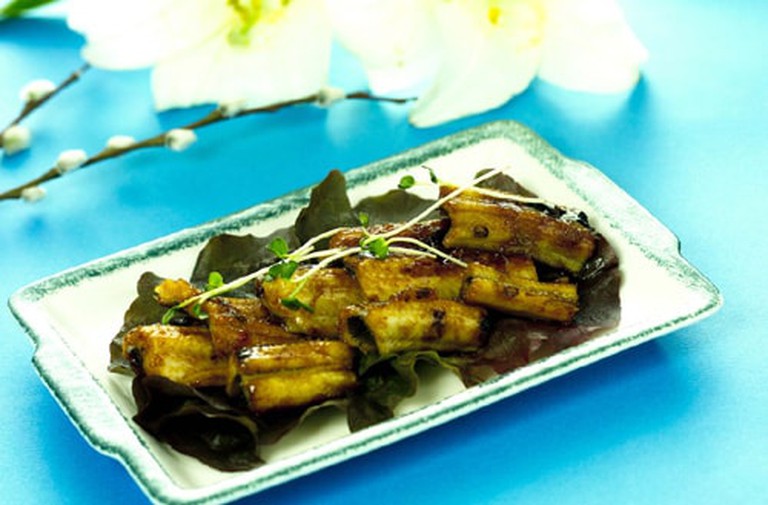 Jangeo-gui, broiled eel | © Republic of Korea / Flickr
Jangeo-gui literally means ‘grilled eel’. Made from fresh water eel, it’s usually cooked on an open griddle at one of Busan’s many waterfront eating establishments, before being seasoned with condiments that usually include soy sauce, sesame oil, sugar, and sesame seeds, and served either solo or with dipping sauces. Jangeo-gui is especially popular in the summer months, as it’s believed to prevent heat fatigue. It’s also believed to increase male stamina — whether or not this is true is up for debate, but it certainly packs a punch in terms of vitamins, especially vitamins E and A, which promote blood circulation and discourage wrinkles. Eat it at Jagalchi Market or Nampo-dong in any one of the casual seafood restaurants around for a traditional meal, or head to Go Ok in Namcheon (near to Gwangalli) for a Japanese take on the Busan staple. Go Ok is popular with locals and can have a queue going out the door at busy times. 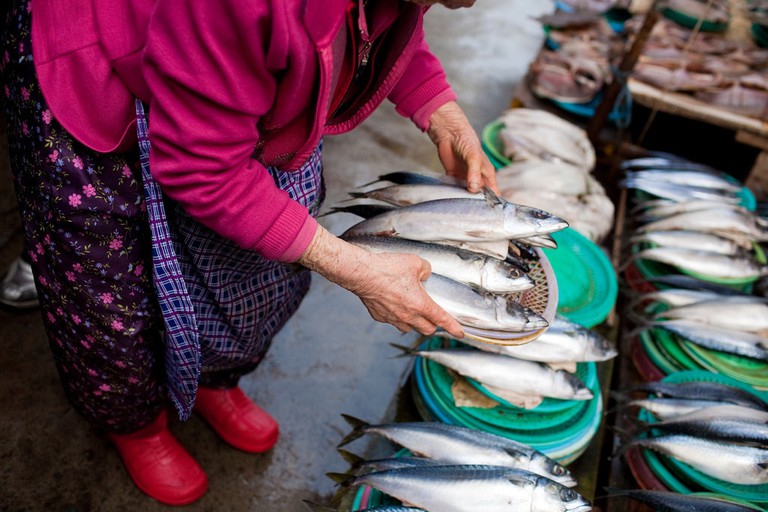 Jagalchi Fish Market | © Beyond Neon / Flickr
Sannakji is one of Busan’s more adventurous food specialties. Live octopus legs are sliced into small pieces and served — still wriggling — with sauce. A good place to try it is Jacky’s Seafood Restaurant, located on the second floor of Jagalchi Fish Market. As you’d expect with the market just below, the food is fresh and consistently good. Jacky also speaks great English and is happy to recommend dishes to complement your sannakji. 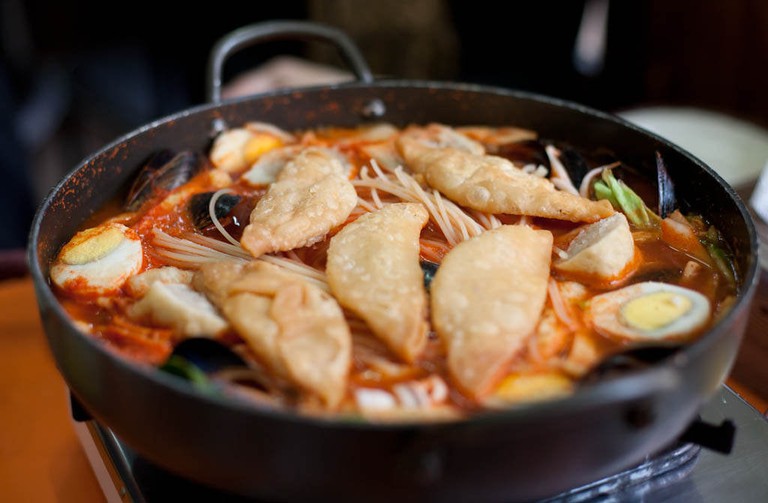 Nutritious and delicious, a bowl of steaming hot haemultang — Korean seafood stew — should set you up nicely for even the most strenuous of days. For some of the best in town, head to Jeongwon Haemultang, near Gwangalli Beach. Like many of Busan’s tastiest restaurants, its unassuming premises mask a perfectly-executed menu. The star of the show is the restaurant’s ultra-fresh, top-quality seafood, which is highlighted by pleasingly simple recipes — seasonings are subtle, allowing the natural flavours of the ingredients to shine through. Seating is Korean-style, on the floor. Reservations are recommended, as the restaurant can be very busy. 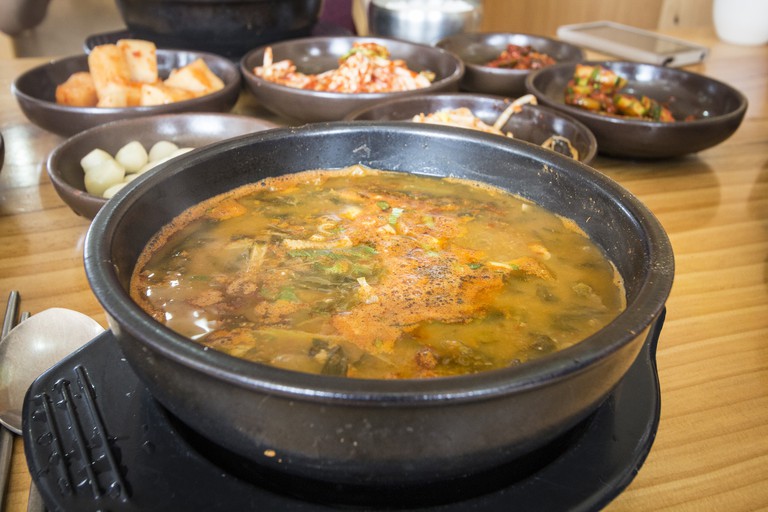 Tang means ‘soup’, and Chueotang is said to make you beautiful — perhaps one of the reasons it’s so popular! This property seems a little incongruous given that its main ingredient is mudfish, which looks just as visually appealing as it sounds. The dish contains lots of vitamins, minerals and calcium, however, which are believed to improve the complexion and boost radiance. The mudfish is also ground into the soup, releasing a number of nutrients from the bones. It’s not, strictly speaking, a seafood dish — mudfish is a freshwater fish, given its name by the muddy waters it inhabits — but given its benefits (and surprisingly mouthwatering taste), we’ll let that slide. A great version is to be found a little out of town, at local restaurant Gupo Chueotang. 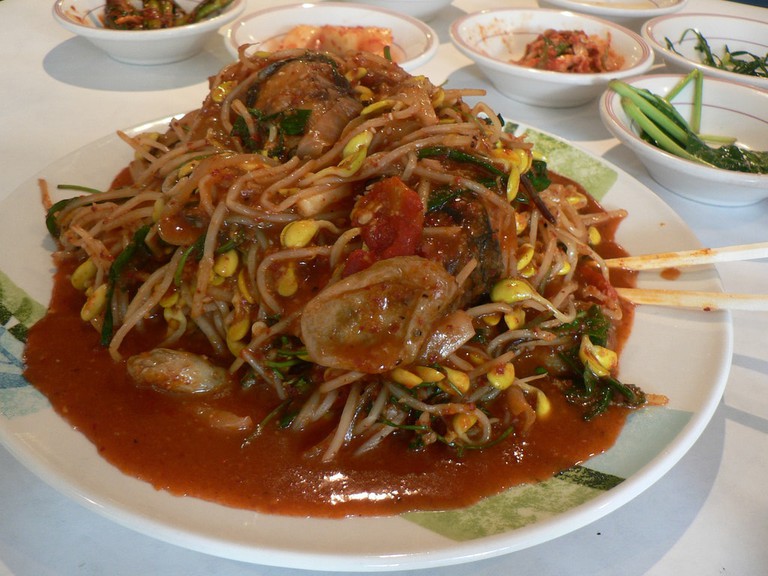 Near Busan Station, you’ll find Dulae Agujjim, a restaurant which serves a generously-portioned, great version of Busan’s specialty dish agujjim. Agujjim is often translated into English as ‘braised spicy angler fish’ – jjim encompasses a variety of steamed foods, and agu (or sometimes agwi) is the Korean name for blackmouth angler fish. Not one for the spice-shy, agujjim is one of Korea’s more punchy seafood dishes, with chilli powder, garlic, and ginger all making an appearance. The spicy fish flesh is offset by crunchy bean sprouts mixed into the dish. 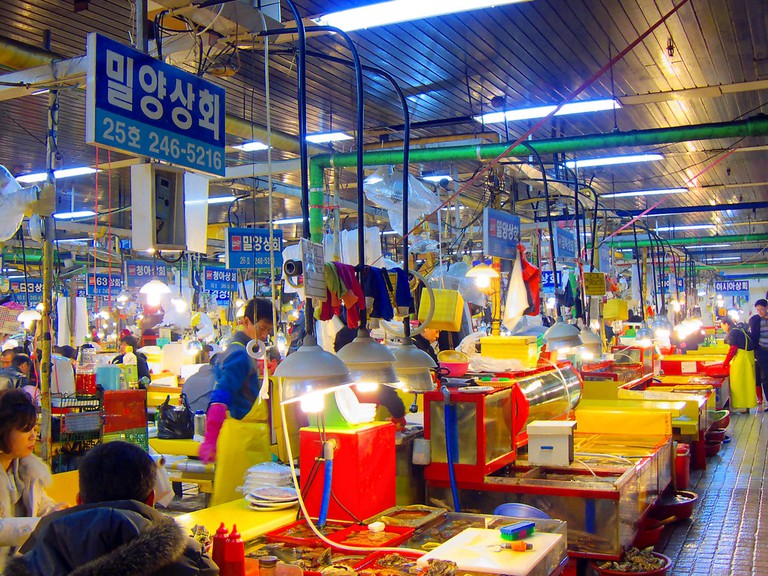 Jagalchi Market | © yeowatzup / Flickr | © yeowatzup / Flickr
Another must-try for adventurous foodies is gaebul. Just like sannakji, your best bet for this is Jagalchi Market, where there are a wide range of vendors to choose from. Another name for gaebul is ‘penis fish’, and once you’ve seen it, you’ll understand why. It’s not actually a fish, but rather a type of thick, fat sea worm (we promise it’s tastier than it sounds!) Gaebul is believed to have aphrodisiac properties, but — like oyster — this may well be merely the power of suggestion. Live gaebul are sliced into pieces before your eyes and served immediately with dipping sauce. Bon appetit!
Give us feedback