10 Reasons Jeonju is the Food Capital of South Korea

“Eat once in Jeonju,” Koreans say, “and you’ll be spoiled for life.” Situated in the country’s southwest, Jeonju is renowned for its gastronomy and food industry, and has over the years developed into South Korea’s food capital. But what makes it one of the best cities to eat in? We’ve rounded up 10 reasons. 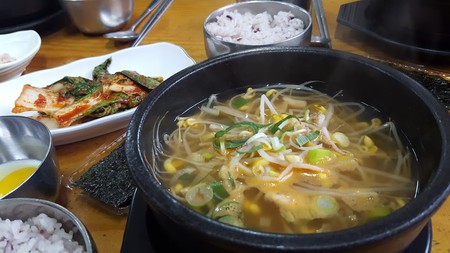 With its deep-rooted tradition of cultivating rice on the Honam Plain, catching fish from the Yellow Sea, and harvesting fresh vegetables and wild greens from the mountains, Jeonju has been synonymous with high-quality ingredients for centuries. In the past, the women of Jeonju were known for their cooking skills, while unique local specialties have helped to evolve a distinctive food culture. For these reasons, the city was designated a UNESCO City of Gastronomy in 2012.

Jeonju is the birth place of bibimbap (rice bowls with veggies and red pepper paste), a dish that is at once recognizable, even to those who are new to Korean cuisine. The city has a unique way of serving it, making use of the fresh, flavorful vegetables that the surrounding farmland provides. You can also find modern twists on the dish throughout the city, including a roll-up waffle bibimbap concoction that is as delicious as it is creative. 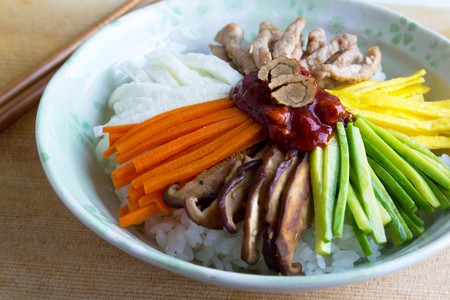 Jeonju is so proud of its bibimbap, in fact, that the city comes together to celebrate the dish at its annual Jeonju Bibimbap Festival. Consisting of a variety of programs such as cultural performances and food contests, the real highlight is the presentation of the nation’s biggest bibimbap bowl, which can serve up to 400 festival-goers.

Korea’s top food city could also be considered its makgeolli capital. There are no less than seven ‘makgeolli towns,’ or streets lined with bars that specialize in the milky spirit made from fermented rice. Similar to Spain’s tapas bars, these establishments serve up generous portions of food when your order the drink, which is presented in gigantic copper kettles and consumed from copper bowls. 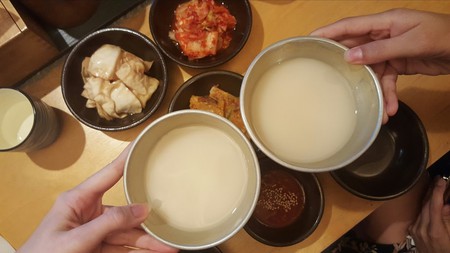 The choco pie is, without a doubt, South Korea’s most popular packaged snack. Far superior to the standard mass-produced choco pie are those prepared at PNB Bakery, Jeonju’s oldest (established in 1951) and most celebrated bakery. Visitors line up around the block to taste the specialty: two delicious circles of nutty chocolate cake, glued together with strawberry jam and butter cream and covered in chocolate. 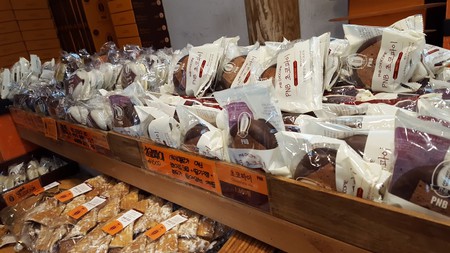 Although not as famous as makgeolli, moju is another regional liquor highly revered by locals. Made from medicinal ingredients such as cinnamon, ginger, jujubes, ginseng, arrowroot and kudzu, it is considered to have numerous health benefits, and is often consumed to prevent colds in the winter. With a low level of alcohol—about 1.5%—just about anyone can enjoy a glass or two without having to suffer through a hangover.

Jeonju’s fresh ingredients and age-old methods of preparation make a full royal court meal a true celebratory occasion. Spread out on a large table, dishes such as savory pancakes, grilled fish, pickled vegetables and pungent soups are intricately arranged like works of art. Often presented in beautiful brassware, royal court cuisine allows visitors to sample the true flavors of the region, all the while having a dining experience unlike any other. 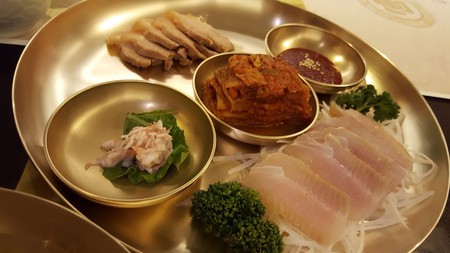 Established in 1905 as a public market, Nambu Market is a spacious complex that consists of some 800 stores with 1,200 workers selling vegetables, fruits, food, dried fish, furniture and general goods. The market really comes to life on Friday and Saturday nights, when vendors set up food stalls that offer everything from bacon rolls to octopus skewers and Vietnamese pho. A trot singer planted at the center of the market keeps the mood lively!

Jong-ga, households descended from an esteemed ancestor through the eldest son of each generation, generally have more than 500 years of history. Carrying on their forefather’s traditions and following the neo-Confucian ideals of the late Joseon Dynasty, these families still stay true to the principles (and recipes) of the past. Some families, like those at Hakindang House, have opened their doors so visitors can experience dishes using cooking techniques and ingredients (think century-old soy sauce) that have been passed down from generation to generation. 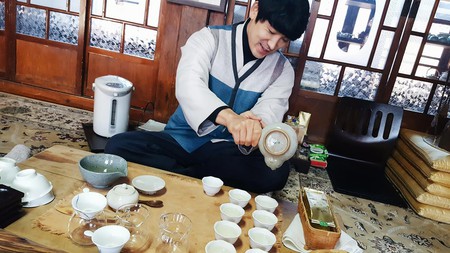 Jeonju’s traditional Hanok Village is not only home to one of the biggest collections of preserved traditional Korean-style houses in the country, it is also the site of an increasingly thriving street food scene. In addition to the Korean street food classics such as tteokbokki (spicy rice cakes) and odeng (fish cakes), there are plenty of one-of-a-kind delicacies that are sure to make you simultaneously curious and hungry. Favorites include grilled cheese skewers, baguette burgers and cotton-candy-and-macaroon patbingsu (shaved ice).

Jeonju has made continual efforts to protect its traditional food culture and develop its gastronomy sector. Included among these efforts are various traditional food and cooking programs at academic institutions, the establishment of the Creative Culinary Institute of Korea and the Bibimbap Globalization Foundation, and the hosting of the International Fermented Food Expo. Through these initiatives, the city aims to contribute to the internationalization of traditional Korean food, while also creating a model for sustainable development for the food industry of the future.