Models transform into art at the Daegu International Bodypainting Festival | © stopete60 / Flickr
There are plenty of things to, do, see and eat in Daegu. But there are also quite a few that you can only experience in the city. Explore the more eccentric side of Daegu at these 10 attractions.

Wonder at the Largest Stone Buddha in Korea

Donghwa Temple, located near Palgonsan Cable Car, is a Buddhist temple with a 1, 500 year history. The religious site has many famous attractions, but the most celebrated is the Tongil Daebul, or “Great Unification” Buddha. Towering 33 meters above the temple grounds, it is the largest stone Buddha on the peninsula. 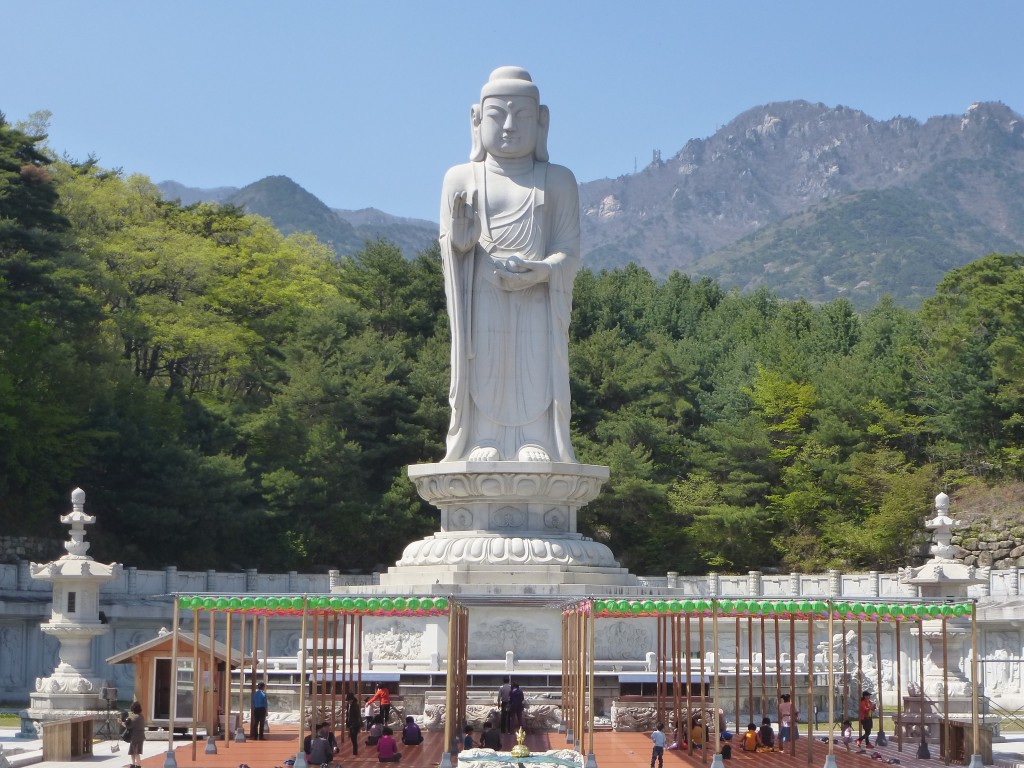 If exotic food is your thing, then Anjirang Gopchang Alley is a must visit. Here, you can choose from a variety of restaurants that all serve up the same specialty: gopchang. This chewy delicacy of grilled cow or pork intestines is a favorite among Koreans and worth trying in Daegu.

Appreciate the Art of Body Painting

Held for two days in late summer at Duryu Park, the annual Daegu International Bodypainting Festival (DIBF) is a sight to be seen. Artists from all around the world come together to show off their skills at an event unlike any other. The highlight of the festival is the body painting competition, where nearly nude models are transformed into exquisite works of art in just a few short hours.

During his reign, King Sejong, the creator of the Korean alphabet and the country’s most beloved monarch, collected the tae, umbilical cords and placenta, of his children. Tae signified a baby’s life and destiny, so to ensure good fortune for the child, Korean ancestors buried it in a holy place. King Sejong felt so fondly of Seongju, just outside of Daegu, that he moved the umbilical cords of 17 of his legitimate sons there.

Play Dirty at a Tomato Fight

Tomato lovers (or anyone who has ever wanted to be in a food fight of epic proportions) should not miss the Dalseong Red Festival, held in May. Inspired by Spain’s La Tomatina, the family-centric event hosts events such as a tomato parade, tomato wine tasting, and of course, a massive tomato fight.

Youngdo Velvet Gallery is the world’s first velvet exhibition hall, and the only one in the country. Covering four floors, this unique museum showcases beautiful velvet clothing, Korean traditional costumes and other goods. Visitors can also experience velvet weaving, printing and dyeing.

Nerd out at a Sci-fi Restaurant

Toys. Figurines. Movie props. For the past 10 years, designer Woong Cho has collected memorabilia and recently decided to share his passion with Daegulites through his CW Restaurant. Part restaurant, part museum, the business is the only one of its kind in Korea. Housing a variety of collectibles from Star Wars, Terminator, Marvel, Pixar, and more, it pays homage to the highly influential comic and sci-fi worlds.

Cool Down with Chicken and Beer

One of the best ways to cool down in Daegu, Korea’s hottest city, is to chow down on chimaek, or chicken and beer. The Daegu Chicken & Beer Festival takes place annually in July and offers a great opportunity for visitors to experience this increasingly popular aspect of Korean culture. Some 100 participating vendors serve up the country’s best recipes, while K-pop concerts keep audiences entertained.

Cafe, Restaurant, Korean, Coffee
Situated just outside Daegu in Gyeongsan, Hogsmeade is a must-visit café for any and all Potterheads. Bedecked in memorabilia seemingly straight out of the Harry Potter series, the dimly lit, dungeonesque interior is simply magical. Pose with the sorting hat and house scarves while you wait for your butter beer or coffee. Just don’t mention he who must not be named.
More Info
Open In Google Maps
Seongam-ro 12-gil, Seobu 1(il)-dong Gyeongsan-si, Gyeongsangbuk-do, 712-090, South Korea
View menu
Visit website
Visit Facebook page
Send an Email
Give us feedback

Heal Your Body and Mind

At Yangnyeong Market, the oldest oriental medicine market in Korea, browse shops that offer countless herbs and traditional treatments that promise to cure everything from high blood pressure to wrinkles. Top off your experience with an herbal foot bath at the nearby Daegu Yangnyeongsi Museum of Oriental Medicine.