This Is the World’s Cheapest Michelin Star Restaurant, Where a Meal Costs You $2 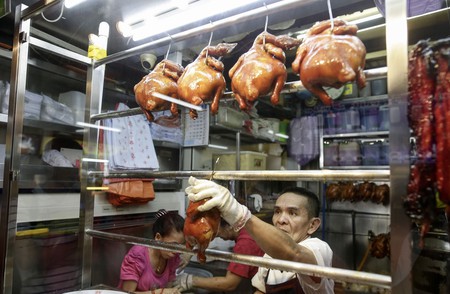 When you think of a Michelin-starred restaurant, you might think of Heston Blumenthal’s Fat Duck, or something involving Gordon Ramsey. What won’t come to mind is a tiny stall in the centre of Singapore that only sells one thing – chicken with rice or noodles.

It is no more remarkable than any other stall in the area, with cooked chickens hanging from hooks and large pots steaming fragrantly on the stove. What sets it apart is the enormous queue that forms daily, with tourists and locals alike waiting three hours or more to taste Chan Hon Meng’s iconic S$2 (£1.07) chicken dish.

It’s the most affordable Michelan-starred meal you can get anywhere in the world.

Chan Hon Meng was awarded the star in 2016 and was so surprised at the accolade that he asked if the Michelin committee were joking when they invited him to the Michelin Guide Singapore Gala Dinner.

Chan Hon Meng works 17 hour days, cooking 180 chickens in his tiny kitchen to feed his hungry customers. The chicken is poached and then glazed with a dark soy sauce. You’ll receive a dollop of the same sauce on your plate, along with a spoonful of chilli sauce, a few green vegetables, some dried shrimp and slices of the tender, flavourful chicken. Once you’re clutching the disposable plate you’ve queued for hours to get in your hands, you can either perch on the plastic tables outside the stall to eat it or take it away with you.

The stall has become so popular that Chan Hon Meng has now opened a restaurant near the original location, with air conditioning and sit-down tables. There are even plans to open international locations. He’s partnered with a company called Hersing Culinary to potentially open Hong Kong Soya Sauce Chicken Rice & Noodle offshoots in locations including Thailand, Taiwan and the Philippines.

Chan told CNBC: ‘I would like to open a restaurant in every country to let everyone taste my soy sauce chicken.’

Hawker Chan’s food is so popular that he came to London in March 2018, to huge queues and acclaim. Culture Trip went to check out his famous soya sauce chicken and rice and were not disappointed.

It really is as good as they say it is. The chicken is beautifully glazed and shiny with soy sauce and is toothsome and juicy within. The rice is fragrant and sticky and is doused with the savoury sauce from the chicken. The cucumber is fresh and the beans on the side add textural variation and crunch to the plate. While it cost £6 rather than $2, you can’t quibble when you’re eating a Michelin starred-meal for less than a tenner.

Until Hawker Chan brings his chicken-cooking prowess around the world, however, you’ll have to travel to Singapore to part with your $2. You can be certain that it will be worth the money.