PROFILE
ASIA
/
SINGAPORE
/
Things to Do

The Best Wildlife Experiences In Singapore 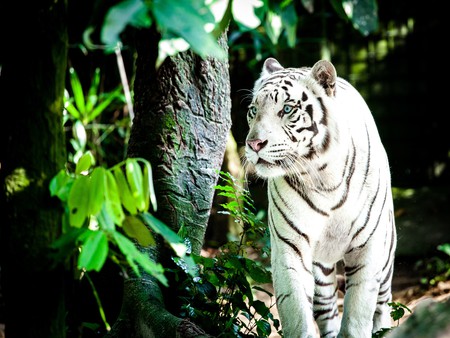 Singapore is renowned for its place on the world’s stage for its involvement in the finance, media, and shipping industries. The country has both an enviable economy and a reputation for cleanliness and orderliness. Although it has one of the highest costs of living in the world, the population density reflects the relatively high level of satisfaction its inhabitants have with the city-state. With all of these things going on, it may come as a surprise that Singapore is also one of the premier destinations in the world when it comes to immersive wildlife experiences.

Singapore Zoo is an immense enclave of animals covering nearly 70 acres of the island. It opened in 1973 and today has over 300 species, of which 15% are classified as threatened species. The Singapore Zoo follows the ‘open’ captivity model wherein many animals are kept in large enclosures that are surrounded by moats or in the case of dangerous animals, the cages have glass fronts. Don’t be put off by Singapore’s infamously humid tropical climate — the zoo offers many ways of getting around the park, including trams, boats, and even horse-drawn carriages.

The Night Safari is the first nocturnal zoo in the world that is open exclusively at night. Whereas other nocturnal zoos alter the schedules of nocturnal animals so that they will be active during the day, visitors to the night safari see these animals in something much closer to their natural habitat. Similar to its neighbors, the Singapore Zoo, the Night Safari follows the model of ‘open’ enclosures so visitors can feel like they are seeing the animals from up close without being in any danger while exploring the zoo’s seven geographical zones on foot or by tram.

It’s true that the SEA Aquarium can no longer claim to be the largest aquarium or to having the largest viewing panel. However, the feature Open Ocean tank that holds 50,000 animals in 18 million liters of water is in no way less breathtaking than before. The giant viewing panel is designed to give visitors the impression that they are submerged in the ocean themselves. The aquarium boasts an immense collection of over 100,000 species from all over the world, including everything from a giant manta ray, dolphins, and a variety of sharks. The aquarium even offers specialty experience packages that allow visitors to sleep in the aquarium so you can see the Open Ocean tank at night or dine at the Ocean Restaurant to enjoy a meal of seafood while sea creatures swim overhead.

The River Safari gives visitors the chance to ride a boat through Singapore’s tropical forests while at the same time enjoy freshwater attractions right next to the boat. On the journey through the park, visitors will pass through ten different ecosystems from around the world and can expect to see animals ranging from American beavers and anacondas to adorable giant pandas and giant otters.

The least well known of Singapore’s wildlife experiences, The Live Turtle & Tortoise Museum is tucked away in a corner of the Chinese Gardens on the west side of the city. Walking through the unassuming gate, you will be surprised to find over 100 species of turtles and tortoises, as well as a sizeable collection of turtle-themed toys. If you’re feeling brave, you can buy a head of lettuce for a few dollars and feed the turtles, but mind your fingers because they have sharp teeth!

Jurong Bird Park is best paired with The Turtle & Tortoise Museum, as they are just a few kilometers apart, and both are quite far from other attractions. The bird park is among the world’s largest, with 5,000 birds made up of 400 different species. Noteworthy exhibits include the Dinosaur Descendants, where you can see flightless birds, the nine-story-tall Lory Loft, and the Penguin Coast.