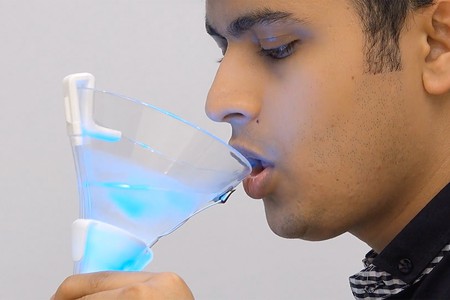 This Vocktail could make water taste like alcohol | © ACM Multimedia 2017

Virtual reality is coming sooner than expected and like all advancements, it trudges on and never asks for permission. The Vocktail (short for Virtual Cocktail), created by Nimesha Ranasinghe and his crew at the National University of Singapore, is one such advancement.

Using a combination of electrical signals, LED lights and smell cartridges that all in tandem play a part in triggering our senses, the Vocktail is able to change any liquid, even the common tap water, into any drink you desire. In essence, it ‘fools’ our minds by tapping into our sensory perceptions to create the imagined drink. If the concept sounds fascinating, that’s because it is.

To break this down, it first starts with the colour, which is where the LED lighting comes into play. By simulating the exact shade, the first step in the grand sleight-of-hand is already in play as we tend to think of certain beverages in specific hues.

Next, we go go to the aroma itself, which is what the tubes at the side does. So say, you decide on a glass of chardonnay, it will then work to blow out the scent that closely mimics that particular wine choice. The final act of this magical feat is the taste. The electrodes that are inserted at the tip of the glass will release tiny electrical impulses which will hit your tastebuds and in effect finalise the piquancy of the swig you’ve just had. All of this is controlled via a mobile app from which you can also share recipes with people around the world.

In effect, this is a startling simple display with complexities hidden in its engineering. This Vocktail can revolutionise so many things – not just in utilising virtual reality to mimic genuine sensory experiences, but also in the world of health.

For instance, people with diabetes can continue consuming sugary drinks without the health effects of the real thing, while those with alcohol dependency can use this to abate urges. Overall, this offers us plenty of potential possibilities in different arenas.

As it stands, this is still in the prototype stage as the team works to improve on their creation but talks are already being done for mass production. So expect this to come near you, or even within your household, real soon.