The World's Most Instagrammed Hotel Has Been Revealed 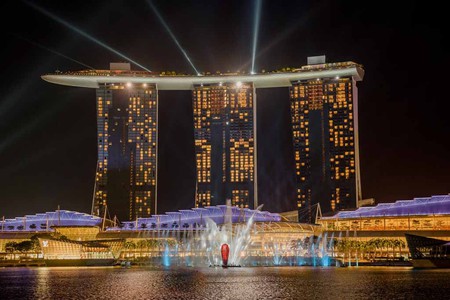 If you’re searching for the most wanderlust-inducing hotel stay for your next holiday, look no further. Instagram’s 2017 Year in Review has named Singapore’s Marina Bay Sands the World’s Most Instagrammed Hotel, beating out a list of tough contenders from Dubai, Miami, and seven hotels from the Las Vegas Strip. Let’s take a closer look at what makes these hotels so well-loved on social media.

Designed by the award-winning architect Moshe Safdie, the three towers of the Marina Bay Sands integrated resort have quickly become one of the definitive icons of Singapore’s skyline since its opening in 2010. The daily light and fountain show at Marina Bay and the TeamLab light artwork located in the Art Science Museum draw lots of eyeballs, but its most spectacular viewpoint is the rooftop Skypark 57 storeys up, in particular the infinity pool overlooking Singapore’s Central Business District – the pool is exclusively for use by hotel guests but that hasn’t stopped many from trying to sneak up for that Insta-worthy shot.

The Bellagio tops all Las Vegas hotels on this list thanks to its magnificent Fountains of Bellagio – an eight-acre dancing fountain extravaganza that is a must-see sight for anyone visiting the Las Vegas Strip. You know the Bellagio is something special when you step into the lobby and are greeted by over 2,000 hand-blown glass flowers on the ceiling that make up Dave Chihuly’s seminal Flori di Como work – just a hint to the numerous masterpieces within its Fine Arts Museum. More photo-worthy moments await when you watch O, the water-themed Cirque Du Soleil production permanently staged at the Bellagio.

It’s easy to forget that you are actually in Las Vegas when you explore The Venetian. Built on the site of the old Las Vegas Sands, its reconstruction of famous Venice landmarks like St Mark’s Square and the arched Rialto Bridge complete with gondolas in the river below might fool your followers into thinking you are in Europe instead of along the Vegas Strip. Not to be missed are the impressive Renaissance-style columns in the Grand Colonnade Lobby, and remember to look up and enjoy the massively detailed ceiling frescoes unique to The Venetian.

Atlantis The Palm in Dubai is the only other non-American contender on this list and it is worth the journey. This luxury hotel stands on the outermost tip of the famous Palm Jumeirah, an archipelago of man-made islands built in the shape of a palm tree, something you can only see when in the air or with the help of a drone. A massive water park and aquarium is fun for the family and makes for some wild holiday memories. And if you can afford it, splurge on one of the hotel’s signature underwater suites and wake up to marine life swimming just outside your window.

The signature dark green lighting of the MGM Grand hotel is a nod to its early days when it had a significant theme of ‘Emerald City’ from the Wizard of Oz back in 1993. Little of the Yellow Brick Road remains today, though you have plenty of options for entertainment whether it be illusions with David Copperfield, a fancy dinner and party at Hakkasan, or even solving a crime at CSI: The Experience, which is based on the hit crime series of the same name. Make sure to get a shot with the statue of Leo, the famous MGM Lion at the entrance.

The Cosmopolitan of Las Vegas has some excellent swimming pools perfect for those ‘wish you were here’ shots while you casually have a soak. Check out the desert-landscape inspired Chelsea pool on the rooftop, or the Boulevard Pool overlooking the strip. Party-goers should hang out at the Marquee day pool to see and be seen. Posh dining options like Momofuku, Zuma, and Wicked Spoon are also great for social bragging rights and your perfect food flat lays.

Wynn Las Vegas has a distinctive building with a striped facade topped with the iconic signature of its owner Steve Wynn that’s hard to miss on the Strip. The hotel is home to some interesting greenery – the only golf course on the Las Vegas strip and an indoor garden that’s more lights than actual plants. Stay for the colourful surreal stage of its permanent show Le Rêve (The Dream), set in a unique aquatic theatre-in-the-round.

Casesars Palace Las Vegas is one of oldest hotels in Las Vegas and on this list, first opening its doors in 1966. But its opulent Greco-Roman style architecture continues to give it a distinctive flair even today. Statue of famous persons like Julius Caesar, Venus and David greet guests as they enter the compound, and replicas of famous fountains can be found at the Forum Shops. Resident stars like Celine Dion and Elton John pull the crowds into the Colosseum, the main entertainment venue at Caesars Palace.

Fontainebleau Miami Beach has a spectacular oceanfront view on the Miami Beach front. This historic hotel has over 60 years of history and was built by Morris Lapidus, one of architects famous for shaping the look and feel of Miami Beach today. He was also responsible for building the now-famous Stairway to Nowhere – a beautiful wide staircase with a picture-perfect gold backdrop and chandelier for you to make that glamorous entrance – the staircase actually just leads to a cloak room. Lapidus’ signature bowtie can also be found all over the original floor tile pattern.

Owned by the Caesars Entertainment Group, Paris Las Vegas stands out with its half-scale replica of the famous Eiffel Tower that has become an icon of the Strip as much as the original tower represents Paris. The original plan was to build a full-sized replica that had to be reduced because of airspace restrictions. Visitors can find more of Paris around the hotel, from the mini Arc de Triomphe to the facades of the Louvre and the Paris Opera House.