The Ultimate Nightlife Guide to Singapore

When the sun goes down in Singapore, skyscrapers shine like rock stadiums, ties loosen, and pumping music brings people to life. Here is Culture Trip’s ultimate guide to the city’s electrifying nightlife.

Singapore’s vibrant nightlife scene is an unmissable experience. From award-winning cocktail bars to glitzy nightclubs and world-class music festivals, there is never a dull moment in the Lion City. Every night, bars keep the drinks flowing until late and raucous parties rock the city throughout the year – meaning there’s always reason to party in Singapore. Cheers! 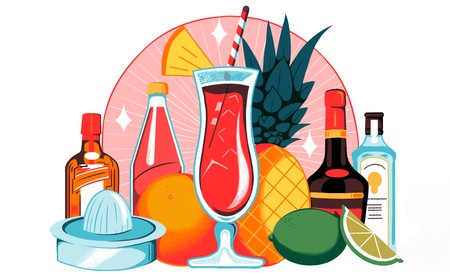 Singapore’s nightlife scene is as diverse as its 5.7 million population, with its after-hours establishments scattered across the city in different neighbourhoods (catering to different crowds). The city’s Central Business District is decidedly more glitzy than the hipster enclave of Haji Lane, for example.

Thanks to Singapore’s strict alcohol laws, parties here are a lot tamer when compared to Bangkok’s Khao San Road and Hong Kong’s Lan Kwai Fong. Don’t be surprised if you see a group of partygoers dressed to the nines, and another in shirt-and-jeans outfits dancing side by side in a club. Because of the hot and humid weather all year round, Singaporeans are not fussy over dressing – however, most clubs do enforce a smart-casual dress code. This means no shorts and flip-flops allowed.

How expensive is Singapore’s nightlife?

If you’re seeking buckets of vodka for under a dollar, you’ve come to the wrong place. Singapore’s nightlife is very pricey and there are many reports to confirm this. According to GoEuro’s Beer Price Index in 2016, a 330ml bottled beer costs about S$11.40 (USD$8.34) – which makes it the second most expensive city in Asia to consume beer. This is unsurprising really, as Singapore is the world’s most expensive city to live in (for the fifth year running!), according to Economist Intelligence Unit 2018. Fortunately, ladies can skip the costly prices on Wednesdays, aka Ladies’ Night, with many establishments such as CÉ LA VI and Bang Bang offering women free admission and complimentary alcoholic drinks. 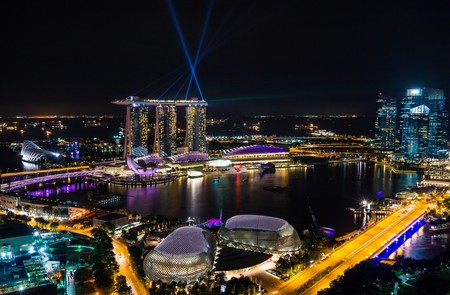 What are Singapore’s laws surrounding drinking and partying? 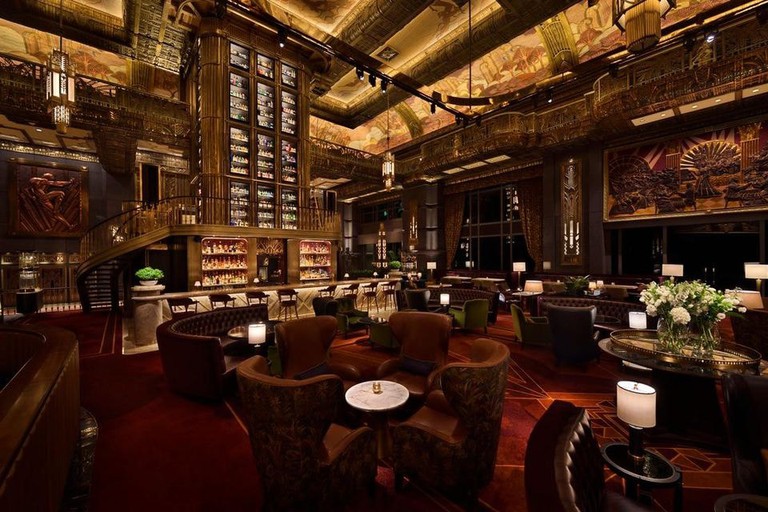 Atlas is a word-famous specialty gin bar located in the grand lobby of the Parkview Square Building. Boasting more than 1,000 different gin labels, Atlas is making waves in the nightlife industry with its unrivalled gin collection and jaw-dropping opulence. Featuring a 15-metre-high ceiling and a three-storey gin tower, this is a bar that loves to make a statement. Realtors estimate Atlas’ monthly rental to rack up a whopping US$52,700. In addition to this, the bar has been featured in Time’s inaugural 2018 World’s Greatest Places list, and ranked number four in Asia’s 50 Best Bars 2018. Yes, this is where you can rub shoulders with real-life Crazy Rich Asians. 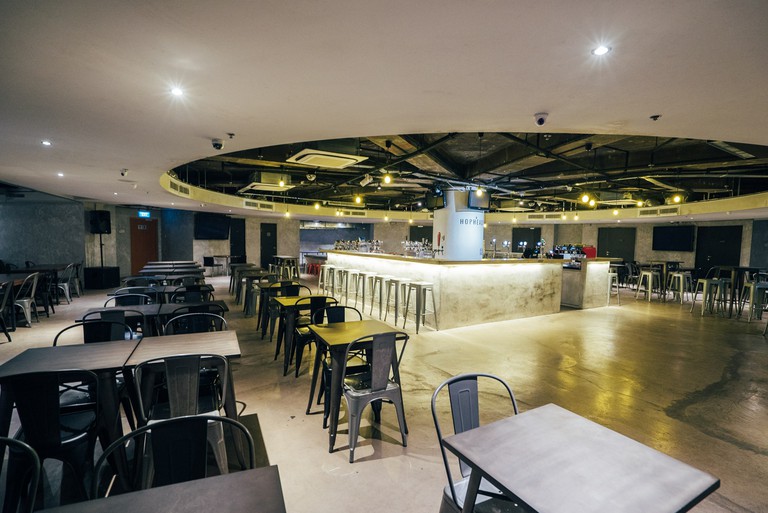 Hidden within an inconspicuous basement in the Dhoby Ghaut vicinity, a trip to HopHeads is like a debaucherous college house party. This hectic underground bar is filled with Singapore’s energetic youths challenging each other to friendly games of foosball, darts and beer pong. Recommended dishes include Chilli Crab Pasta (S$17.90) and Sambal Chicken Pizza (S$19.90). Grab some beer towers and let the good times roll! 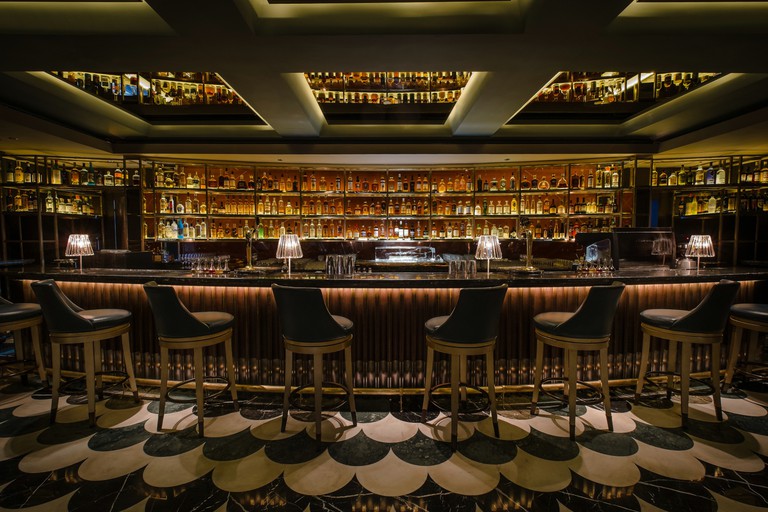 © Manhattan at Regent Singapore
Located on the second floor of Regent Singapore, the 1920s-inspired Manhattan Bar is a dream come true for cocktail connoisseurs. The swanky hotel bar has been awarded the title of Asia’s Best Bar for the past two consecutive years. Look forward to handcrafted alcoholic concoctions made from the world’s first in-hotel rickhouse, all made with exquisite homemade ingredients. You will not go wrong with their signature creations, the New York Sour (S$25++) and Manhattan (S$25++).
Open In Google Maps
1 Cuscaden Road, Orchard, Singapore, 249715, Singapore
+6567253377
Give us feedback 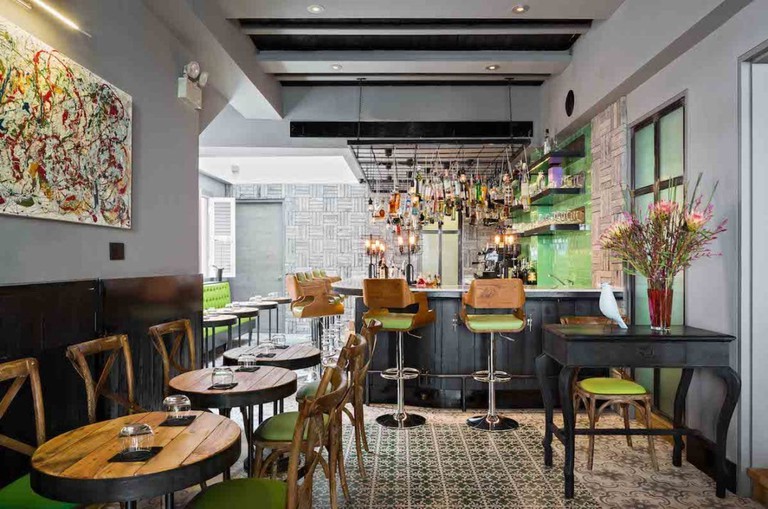 The interior of Tippling Club, Singapore | © Tippling Club, Singapore
Located in a conservation shop-house in Tanjong Pagar, Tippling Club is a popular destination amongst epicureans. This cosy cocktail bar has gone from strength to strength since its inauguration in 2009, and clearly shows no signs of stopping. Today Tippling Club holds the honorable title of Asia’s 7th Best Bar. It is also the rightful creator of the world’s first edible cocktail menu. The Dreams & Desires menu features 12 different flavoured (alcoholic) gummy bears. Sample all the squishy gummies before deciding on your preferred cocktails (S$24++ each). Best-selling cocktails here include ‘Happiness’ and ‘Beauty’.
Open In Google Maps
38 Tanjong Pagar Road, Outram, Singapore, 88461, Singapore
+6564752217
Visit Website
Give us feedback 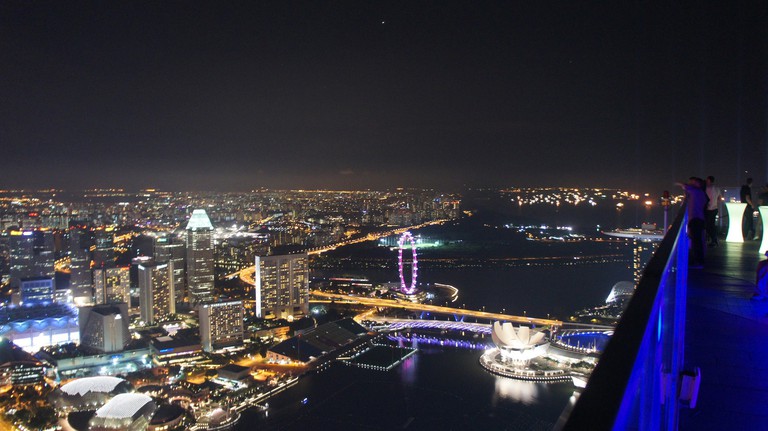 View of the Singapore skyline from 1-Altitude | © Dennis Keller / Flickr
Book Now
1-Altitude Rooftop Gallery & Bar is the tallest al fresco rooftop bar in the world. Standing at 282 metres above sea level, the nightlife establishment is frequented by A-listers from all over the world. Check the weather forecast before visiting, because the rooftop bar-slash-club closes under unfavourable weather conditions. Expect to pay a cover charge of S$35 per person (inclusive of two drinks) between 6:00pm to 9:00pm, and S$45 per pax (inclusive of two drinks) for admission into 1-Altitude after 9:00pm. The stunning views from above will make the hefty entrance fees worthwhile. Take note that a smart casual dress code applies and the use of tripods is forbidden. 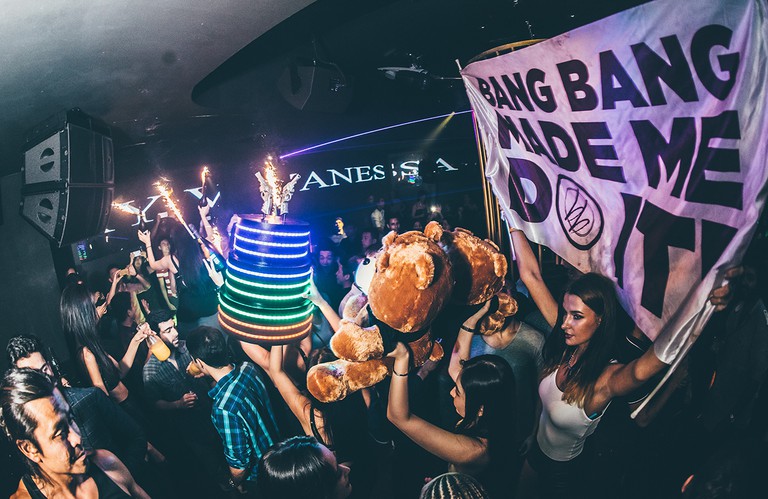 Open till 6:00am on Wednesdays, Fridays and Saturdays, Bang Bang at Pan Pacific Hotel Singapore is where you can party till the sun comes up. The wildly successful nightclub spans 5,000 square feet and is renowned for its over-the-top parties. Think epic laser shows, diamond bar cages and VIP bottle services. Ka-ching. Despite its roaring success, Bang Bang has made a bold move of being the first nightclub in Singapore to eliminate all cover charges in January 2018. Kudos to Bang Bang! 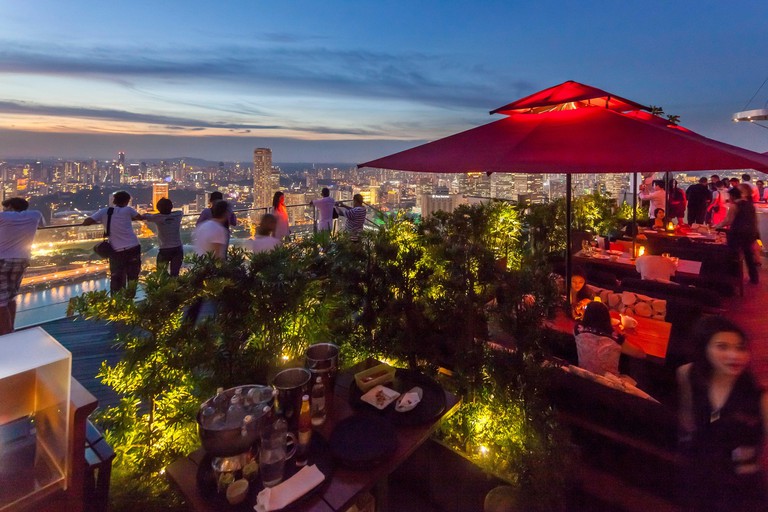 Roof top bar, CE LA VI SkyBar on the Marina Bay Sands, Singapore | © Hans Blossey / Alamy Stock Photo
Book Now
CÉ LA VI is one of the most highly sought-after nightlife destinations in Asia; the nightclub is ranked #67 on DJ Mag’s 2018 Top 100 Clubs in the world. Resting on the observation deck of the iconic Marina Bay Sands skyscraper, this is where you can enjoy a spellbindingly beautiful view of Singapore’s ever-changing cityscape. Here is an insider tip for the ladies: Enjoy free entrance to CÉ LA VI and one complimentary premium pour on Wednesday nights (after 10:00pm till late).

Commas might be one of Singapore’s newer clubs, but it faces no shortage of partygoers. Situated in the sky garden of Suntec City, the club is open on Wednesdays, Fridays and Saturdays – and each day sees a distinctly different crowd. University students get to enjoy free entrance on Wednesday nights by simply flashing their student identification cards. And that’s not all! Other awesome Wednesday-only promotions include one-for-one bottles and glasses. On Fridays, Commas is popular with nearby office workers nights.Come Saturday night, the intimate club’s crowd evolves into a high-profile mix of nightlife tastemakers, affluent business travellers and regional socialites.

The turnover rate of nightlife establishments in Singapore is extremely high, but 27-year-old Zouk Singapore evidently remains unfazed by its rising competitors. In fact, Zouk was recently ranked as the World’s 3rd Best Club in DJ Mag’s 2018 Top 100 Clubs – and this impressive award is merely one of Zouk’s many accolades. Zouk has played host to hundreds of internationally acclaimed artistes such as Armin van Buuren, Hardwell, and late DJ Avicii. Having said that, partygoers can also anticipate spectacular performances by local Singaporean DJs. 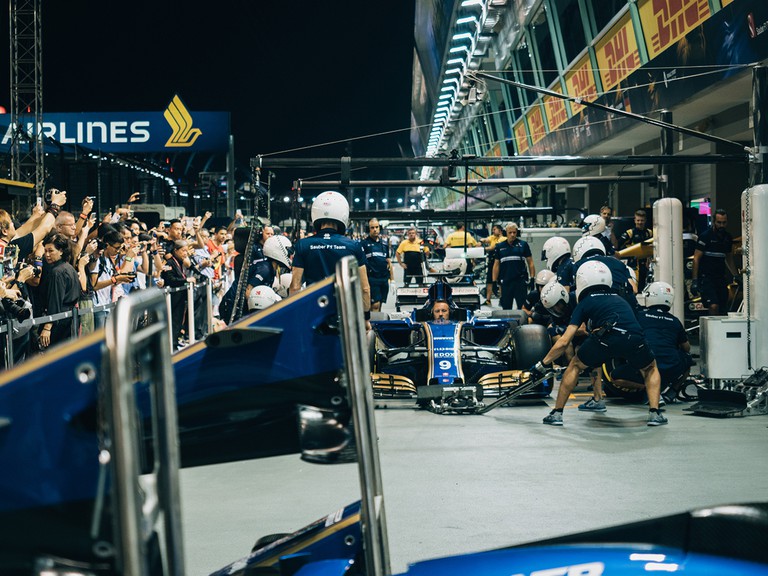 Globetrotting high-flyers and F1 enthusiasts are known to fly in to Singapore over a weekend just to catch the annual Singapore Grand Prix. Held at Marina Bay Street Circuit, the ticketed three-day sporting event is frankly more than just speeding cars but is an entertainment night unto itself. This year, the F1 Singapore entertainment line up includes big shots such as The Killers, Dua Lipa and Mandopop king Jay Chou. 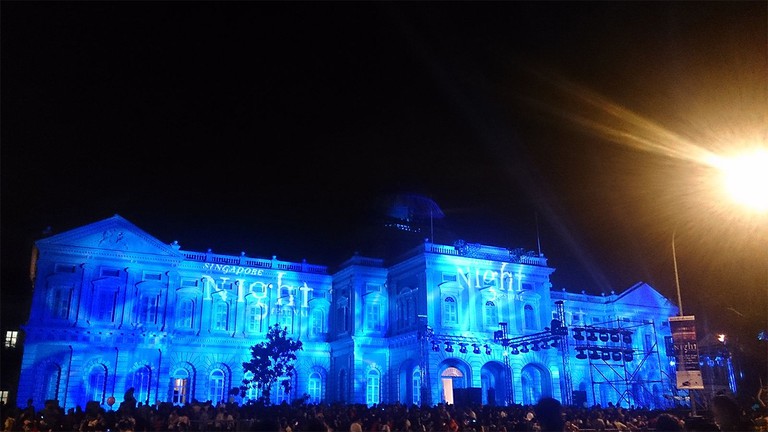 For one weekend only, you can experience Singapore’s heritage buildings like never before. The yearly art event itself has attracted more than half a million attendees – a steady 800% growth since its inception in 2008. What you can expect: Whimsical light installations and marvellous local musical performances in the Bras Basah.Bugis precinct till midnight. Admission is free for all light exhibitions. 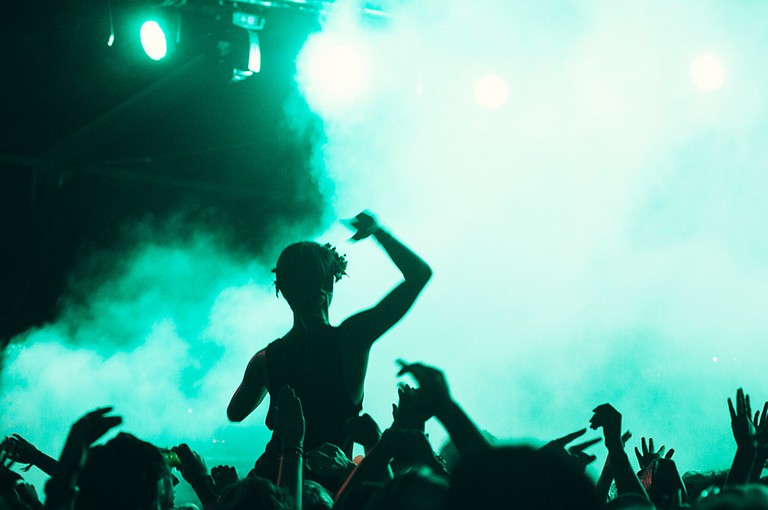 St. Jerome’s Laneway Festival is a paradise for hipsters with a penchant for subculture music, and this year marks its eighth edition in Singapore. The indie music festival, which takes plane in January, featured a total of 23 acts in its 2018 iteration. The lineup includes a brilliant mix of local, regional and international talent, including Wolf Alice, The War On Drugs and several up-and-coming homegrown bands. 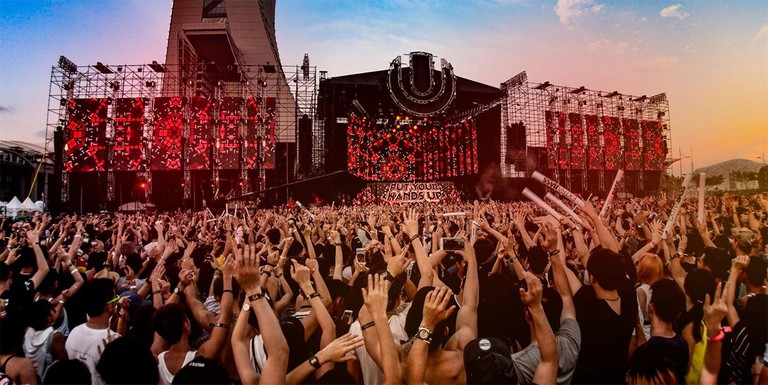 Having made its debut in 2015, Ultra Singapore has attracted over 40,000 electronic dance music fans each year. The two-day EDM festival is held at Ultra Park, an outdoor venue just a stone’s throw away from the Marina Bay Sands hotel. There are three stages at Ultra Singapore: The Main Stage, the Live Stage, and the Resistance Stage. Afrojack, Kygo and Steve Angello are just a few of the stellar DJs that have spun at Ultra Singapore. 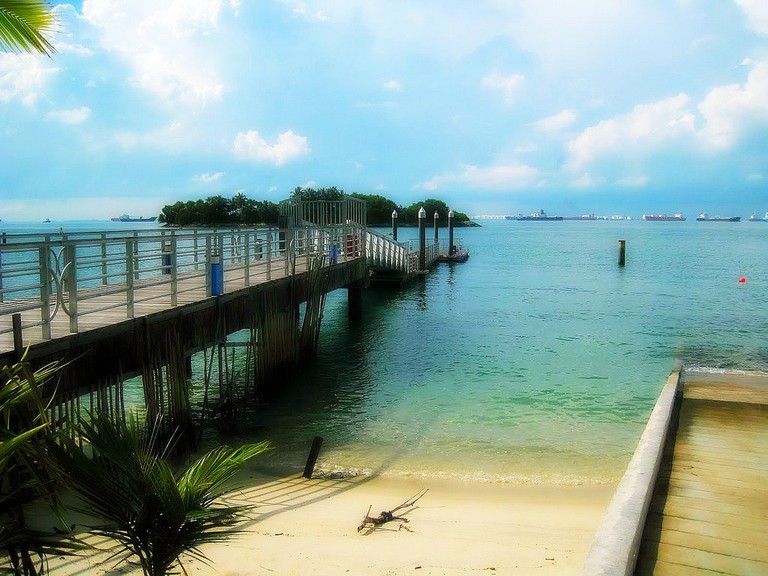 https://www.flickr.com/photos/26116471@N03/5356218039
Book Now
ZoukOut is taking place at Siloso Beach, Sentosa this year on December for its 18th anniversary. The dusk-to-dawn music festival is one of Asia’s longest running dance music festivals, and this year’s exciting lineup includes Dimitri Vegas & Like Mike, Galantis and W&W. Early bird ticket prices start from S$98 per person. Bear in mind that a no re-entry policy applies after 10:00pm for all ticket holders (except VIP).
Open In Google Maps
Southern Islands, Singapore
Give us feedback