Top 10 Things to Do in Chinatown, Singapore 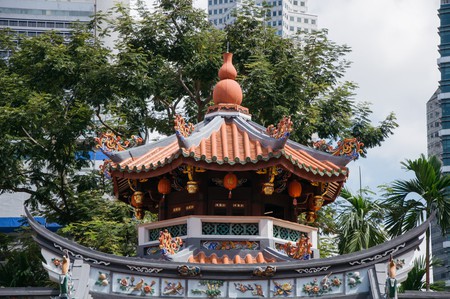 Making up over three quarters of Singapore’s population, nowhere else is the city’s Chinese diaspora best represented than in Chinatown. Here are 10 awesome things to do in this cultural treasure.

No trip to Singapore is complete without a visit to Chinatown. While it is historically the area of settlement for many Chinese immigrants who arrived in the then-British colony, don’t be surprised to find other cultural gems in this district. With good cheap food in abundance, proximity to tourist hotspots, and some of the hippest neighbourhoods in Singapore, here are some of the top reasons you need to check out Chinatown. 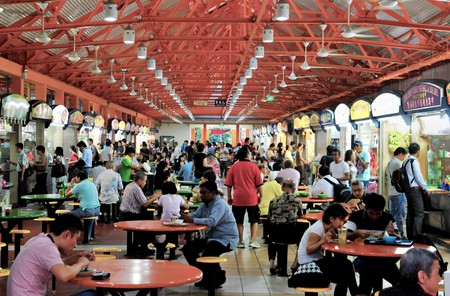 Maxwell Food Centre, Singapore | © Eugene Tang / Alamy Stock Photo
Hawker centres are the best place to experience the authentic flavour of Singapore as locals do, and Maxwell Food Centre is one of the more popular with both Singaporeans and tourists. If there’s one thing you do in Singapore’s Chinatown, it’s grab a meal at this place. The Hainanese Chicken Rice at Tian Tian Chicken Rice is a Michelin Bib-Gourmand recipient and a must-try dish at this hawker centre, but if you’d rather skip the perpetually long queue, there are plenty of other stalls that serve cheap and good food from cultures all around Asia.
Open In Google Maps
1 Kadayanallur Street, Downtown Core, Singapore, 69184, Singapore
+6562255632
Visit Website
Give us feedback 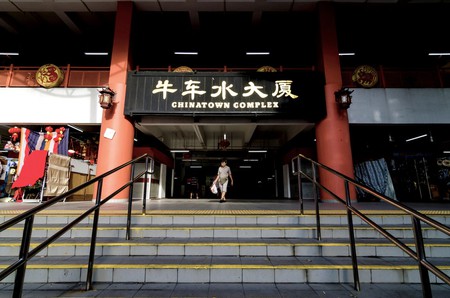 Chinatown Complex, Singapore | © NG ZHENG HUI / Shutterstock
Chinatown Complex is home to the largest hawker centre on its second level with over 260 food stalls offering a generous variety of Singaporean street food fare, from traditional Hainanese chicken rice and Char Kway Teow, to craft beer on tap and even some Michelin-Starred stalls, mostly at very budget-friendly prices. Over 470 wet market and sundry stalls fill up the other levels of this unassuming building, and you will often see groups of older residents sitting around the sheltered areas nearby chit-chatting or playing intense games of Chinese chess.
Open In Google Maps
335 Smith Street, Outram, S, 50335, Singapore
Give us feedback 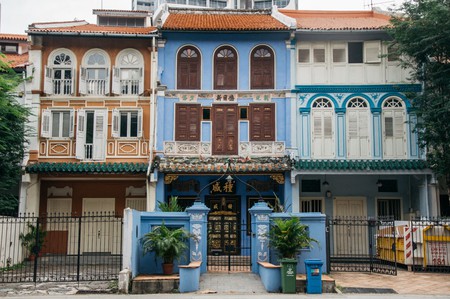 An icon of the mixed straits Malay and Chinese also known as Peranakan culture | © Angela Koblitz / Culture Trip
The Peranakans are a unique mix of the Straits Malay and immigrant Chinese cultures found mostly in Malaysia and Singapore. This bright blue house is a prime example of the traditional Peranakan terrace-house, and was once the home of a Peranakan man or Baba called Wee Bin, whose descendants lived in this home for many generations. The furniture and artefacts inside are all relics from when the house was inhabited by the family, making it a genuine representation of Peranakan life and culture in Singapore in the 19th and 20th centuries. Advance booking is necessary for guided tours which are free and very informative.
Open In Google Maps
157 Neil Road, Bukit Merah, Singapore, 88883, Singapore
+6562275731
Visit Website
Visit Facebook page
Give us feedback 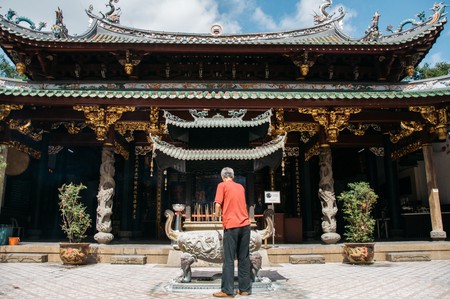 The Thian Hock Keng Temple is one of the oldest Chinese temples in Singapore, built in 1840 by the Hokkiens who hailed from the Fuzhou province. The temple is a showcase of southern Chinese architectural styles and assembled without the use of a single nail, with elaborate carvings covering the walls and roofs. Thian Hock Keng Temple was originally located along the coastline before land reclamation took place (now located in Chinatown) and was the first port of call for new immigrants entering Singapore – giving thanks to their deities for helping them make the trip safely. The main deity is Mazu, the Goddess of the Seas, but the temple also encompasses Taoism, Buddhism, Confucianism and ancestral worship. 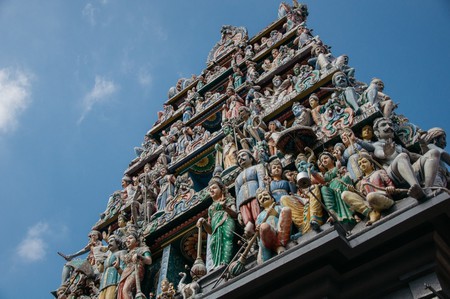 Sri Mariamman Temple, Singapore | Angela Koblitz / © Culture Trip
Chinatown is home to a multitude of places of worship for many religions, including the Sri Mariamman Temple, the first Hindu temple in Singapore. The temple, which worships the goddess Mariamman, was constructed in the early-19th century by southern Indian immigrants. It is in the architectural style of Dravidian temples, with a towering gopuram(entrance tower) decorated by six tiers filled with ornate sculptures of figures from Hindu mythology and culture. Historically, the temple was a centre of Hindu culture and offered help to immigrants; today, it retains many of its social, cultural and religious significance among the Hindu community. Visit the temple in the evening to see their daily Hindu rituals.
Open In Google Maps
244 South Bridge Road, Outram, Singapore, 58793, Singapore
+6562234064
Visit Website
Give us feedback 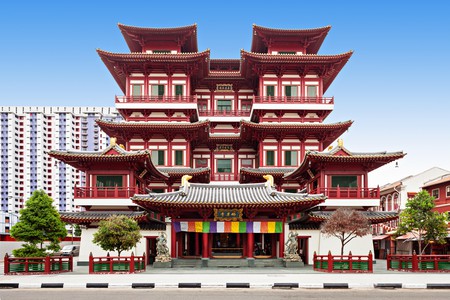 The Buddha Tooth Relic Temple stands proudly along South Bridge Road. A relatively young temple first conceived in 1989 and only built in its current form and location in 2007, this traditional Tang-style design with its red lacquered walls is a colourful addition to the architecture in diverse Chinatown. As its name suggests, the temple houses the sacred Buddha tooth relic that the public can view, though only monks can actually enter the relic’s chambers. The temple is also a museum that is home to other revered Buddhist artefacts. 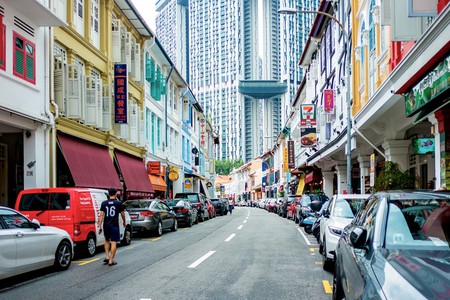 Keong Saik Road has a shady past as a former red-light district lined with brothels and the homes of rich businessmen’s mistresses, alongside a mishmash of clan houses, coffee shops and other sundry businesses. This gentrified area with its quaint row of narrow shophouses has gradually given away to cool food outlets, trendy boutique hotels and co-working spaces, becoming a bonafide hipster hangout in Chinatown today. 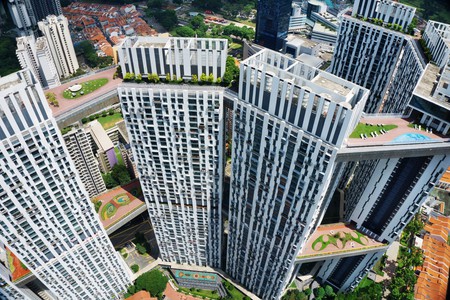 Aerial view at The Pinnacle@Duxton | © Darren Soh / Courtesy of Singapore Tourism Board
The Pinnacle @ Duxton is Singapore’s tallest public housing estate that towers over the shophouses of the nearby Chinatown district. There are two Skybridges connecting the towers, but only the rooftop one on the 50th storey is accessible to the public for a small fee, and with a limit of 200 visitors per day. On a clear day, the panorama from the viewing deck provides a glimpse to the cultural precinct of Chinatown and surrounding residential and office buildings. This spot is particularly popular during National Day and New Year’s Eve, when there are fireworks and other aerial displays.
Open In Google Maps
1G Cantonment Road, Outram, Singapore, 85301, Singapore
+6518002255432
Give us feedback 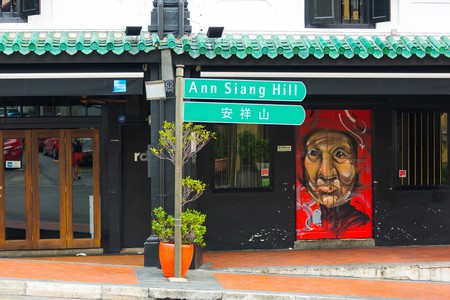 The narrow lanes of Ann Siang Road and Club Street are bustling most nights, but on Friday and Saturday nights the roads are closed off to traffic and weekend revellers and relieved office workers spill out of the many restaurants and bars onto the streets – transforming this quiet, hilly neighbourhood into an extra lively nightlife district. Take your pick from a range of breezy rooftop spots, intimate hole-in-the-wall diners, sports bars and trendy restaurants in this Chinatown treasure.

On the edge of the busy Chinatown district is Everton Park, a motley collection of some of the oldest shophouses in Singapore amidst a quiet residential district. This neighbourhood is a favourite for coffee enthusiasts and serious bean lovers, and you will find various hipster cafes and retail outlets popping up amidst the more traditional sundry shops. Also popular in this area are the growing number of heritage murals and other street art.