The Rise Of Vertical Farming In Singapore 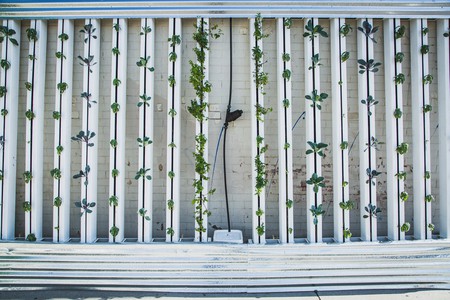 Only 7% of the vegetables consumed in Singapore are grown locally. This is due, not to an inhospitable climate, but rather the high premium on land prevents the use of traditional farming methods that require large swathes of land. Considering these factors, it is not surprising that the city-state is one of the world’s leaders in the development of vertical farming, which has many benefits such as preparation for the future as urban populations increase and suburban populations decrease and it could go a long way to addressing the needs of the ever-increasing human population.

Vertical farming is a relatively new, innovative process in which plants are placed in vertically inclined structures in order to minimize the amount of land needed for farming. One major reason for its success is that all environmental factors can be controlled – artificial control of light, temperature and humidity. Furthermore, this style of farming involves fertigation (an amalgamation of fertilization and irrigation), the process of injecting fertilizers into the irrigation system.

Sky Green Farms opened in 2012, becoming not only the first commercial vertical farm in Singapore, but the first in the entire world. Sky Green Farms, located in the North Western corner of the island near Sungei Buloh Wetland Reserve has over 100 towers that each stand at a height of nine meters.

In the future, your food will come from a production-scale floating vertical aquaponic urban farm. Also… the future is now.#futureoffood #mindblown #urbanfarm #technicallyatwork

The way Sky Green Farms works is that plants are placed on metal A-frames that rotate slowly so that the vegetables pass through a trough of water every eight hours. The actual rotating mechanism is water-powered and that water is filtered and then returned to the plants. The farm ensures that all organic waste is reused. According to Jack Ng, the owner of Sky Green Farms and inventor of the design, the farm is producing vegetables at a rate of 0.5 tonnes a day.

Currently, they are only growing three different vegetables however, Ng is optimistic that he will be able to expand the current farm in terms of size and product varieties. You can find these vegetables in a a number of Fair Price grocery stores, priced at a ten to twenty cent premium over those that are imported from China.

Singapore has a small land mass and every little bit is precious and most of the food we consume are imported. There are small pockets of farms in Kranji but because planting vegetables require a lot of land is probably not going to be sufficient for our local needs. What Sky Greens did is really innovative, they took the call to build vertical farms so as to maximize the land usage. If you can grow them on flat ground, do it in the sky. #verticalfarm #vegetables #localproduce #singaporefarms #kranji #singapore

Another reason Singapore has been at the forefront of the vertical farming movement is that the city-state benefits from year-round warm temperatures. One of the difficulties of implementing vertical farming in North America and Europe is getting enough light and water to maintain the plants – however, there is nothing stopping the program from spreading to other SouthEast Asian countries that enjoy similar climates.

Life of an urban farmer? #viafarmvisit