ASIA
/
SINGAPORE
/
Things to Do

The National Gallery Of Singapore In 5 Artworks 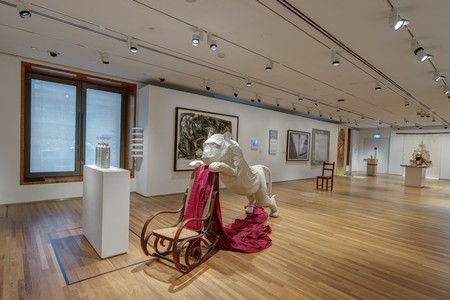 The National Gallery in Singapore opened last year and is already making waves as the leading destination for modern and Southeast Asian art in the region. The gallery was recently recognized for its importance to Singapore and received several prestigious awards from the Singapore Tourism Awards including the Best Attraction Experience and Breakthrough Contribution to Tourism. The National Gallery itself is a work of art, located in the former Supreme Court and City Hall buildings; the building is a model for the neoclassical style that was popular with the British in Singapore in the 1930s.

The exhibition Wu Guanzhong: Beauty Beyond Form was one of the National Gallery’s first exhibitions when the gallery opened last year. Guanzhong is an important painter for Singapore as much as he was a revolutionary for China. He took inspiration from both Eastern and Western styles with his work and is generally regarded as the first modern Chinese painter. Many of his paintings are inspired by the architecture and landscapes of China, as he explains in his biography, “Through painting landscapes I have grown to love my motherland even more and wish to be forever intoxicated in her embrace.” In Hometown Morning, the soft watercolors and impossibly high bridge give the painting an ethereal feeling that makes the viewer question whether the painting is a memory or a dream. 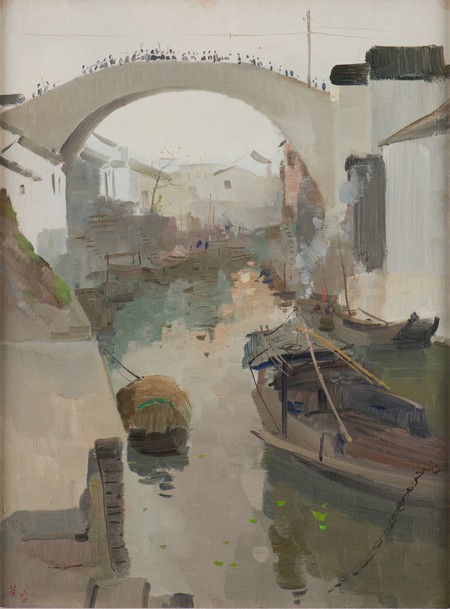 Hometown Morning 故乡之晨, 1960, Gift of the artist, Collection of National Gallery Singapore, Is a poem or a painting? My hometown is both. (National Art Museum of China. The Morning of Hometown in Cultivation and Devotion: works of Art Donated by Wu Guanzhong, People’s Fine Arts Publishing House, 2009.)

Iskandar Jalil is a Singaporean artist and one of the Lion State’s premier ceramicists. In Kembara Tanah Liat, Malay for “Clay Travels,” the National Gallery of Singapore is displaying nearly 200 works from Jalil’s career spanning over five decades. Like many artists, Jalil’s work reflects on the disparity between modernism and traditionalism. To that extent, Kembara Tanah Liat explores six distinct themes, from the existentialist Beauty in Imperfection, to the deeply personal and reminiscent Traveling to Know Who I Am. Jalil strongly believes that both materials and people are shaped by not just the identities of where they are from, but the characteristics of that place as well. To that extent, he encourages all of his students to travel extensively, as this is the way to ideologically meld and merge the pottery techniques of different regions to create new techniques. 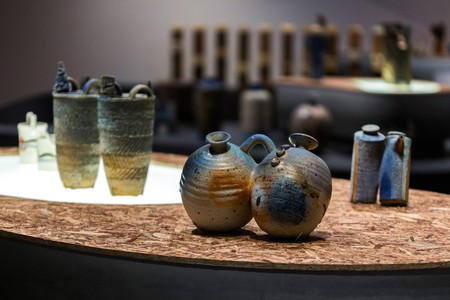 Courtesy of the National Gallery Singapore

Elizabeth Butler, Remnants of an Army

Curated with Tate Britain, the National Gallery brings Artist and Empire: (En)Countering Colonial Legacies to Singapore. This exhibition brings together a collection of artworks produced between the 16th century to present day that analyzes the British Empire with a specific focus on the perspectives from Southeast Asia. The exhibition draws on critical and divisive works such as Elizabeth Butler’s Remnants of an Army, a poignant work that displays William Brydon, the assistant surgeon to the Bengal army and a lone man returning to the gates of Jalalabad, the apparently sole survivor of a brutal massacre. In 1879, when Lady Butler created this piece, it was heralded as a portrait of England’s strength, however, in later years it was seen as a criticism of England’s violent methods of colonialism. 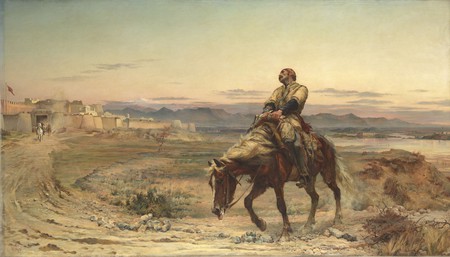 Elizabeth Butler (Lady Butler), The Remnants of an Army, 1879, © Tate | Courtesy of the National Gallery of Singapore

The National Gallery Singapore recently unveiled their latest exhibition, Danh Vo’s Sculpture Garden. The exhibition is in a unique location, the first collection to be shown as a part of the Roof Garden Series. Unlike most exhibitions which have strict rules about maintaining a certain distance from each art piece and avoiding things like flash photography, the Sculpture Garden aims to create a bond with the viewer by encouraging visitors to physically interact with the sculptures. Danh Vo’s Sculpture Garden will be on display until August 31, 2017 and admission is free. The sculpture will change in appearance over the next year as the copper that is used oxidizes so it will certainly be valuable to revisit the exhibition and consider how nature has a profound effect on manmade things. 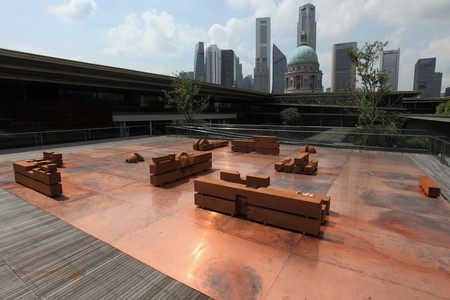 Tang Da Wu’s striking sculpture, Tiger’s Whip is part of the “”Siapa Nama Kamu?” exhibition which translates to “What is your name”. The collection deals with how Singapore appears when seen through the eyes of its artistic community. Tang has played a pivotal role within that community; as the founder of the Artists Village he has given generations of artists a safe place to create art. With Tiger’s Whip, created in 1991, Tang started out on a path of increasing awareness about social and environmental issues through provocative art pieces – in this installation, a tiger that has been poached haunts the person who killed him.