The History of Tiong Bahru In 1 Minute

Tiong Bahru is famous in Singapore these days as being one of the city’s hipster enclaves. Set apart from the luxury fashion of Orchard or the determined Central Business District workers, Tiong Bahru is a neighbourhood full of charm with cafes and restaurants on every corner. There are small hints, however, of what the past held for this neighbourhood.

The name of the area gives away its original history. A mix of Hokkien and Malay, the name Tiong Bahru translates to “new cemetery”. Before being developed in the 1920s by the Singapore Improvement Trust, the area contained burial grounds for the Cantonese and Hakka communities. The public housing in this neighbourhood is the oldest complex in Singapore, and the only one not built by the Housing Development Board (HDB).

It took almost a decade for the land to be cleared of its slums as well as improving the grounds themselves. When construction of the housing estates finally started in the late 1930s, the Singapore Improvement Trust decided to follow the Art-Deco style that was popular at the time – this decision is a significant reason why the area enjoy so much popularity today. When the flats opened in 1936, they were priced too high to be affordable. This led to the neighbourhood being a popular choice for members of the upper class and some rich men even kept their mistresses housed in these council flats. 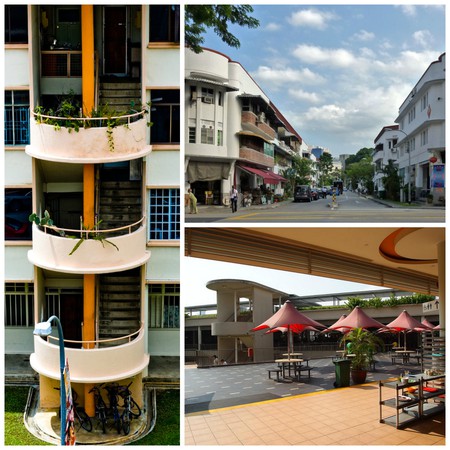 During the Japanese Occupation, many people moved into the area and by the end of the war, the neighbourhood had decreased in value and more middle-class families starting moving into the blocks. As development of the neighbourhood continued, Tiong Bahru was the first to enjoy amenities like a community centre and polyclinic.

When the British-run Singapore Improvement Trust was dissolved in favour of the People’s Action Party’s new initiative, the Housing Development Board, the group began work on plans to build significant additional flats that would be geared towards lower-income groups. In modern times, the preservation of this area has become an expensive proposition. The Tiong Bahru market enjoyed a S$17 million redevelopment and a section of the pre-war flats have been granted conservation status and the Link Hotel spent S$45 million on developing two blocks of conservation flats in 2007.