The 10 Most Beautiful Buddhist Temples in Singapore 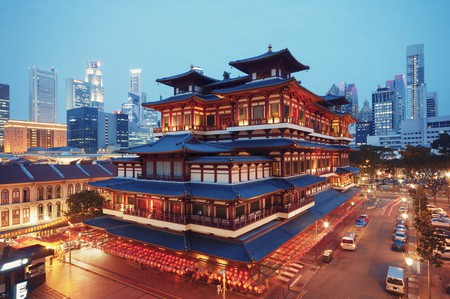 Singapore’s distinct Buddhist temples boast incredible architecture that can’t be witnessed elsewhere. Here are the 10 most beautiful in the city-state.

Buddhism has quite the history in Singapore, thanks to the legacy of early settlers, traders and missionaries. Despite this, a lot of the temples here were only built fairly recently. More than a third of the Singaporean population professes belief in Buddhism, making it the biggest religious denomination by population in the city state. The architecture of these temples is very unique, showcasing strong Indian subcontinental influences and imposing styles. If you’re keen to learn more, Singapore has some fascinating sites worth checking out. 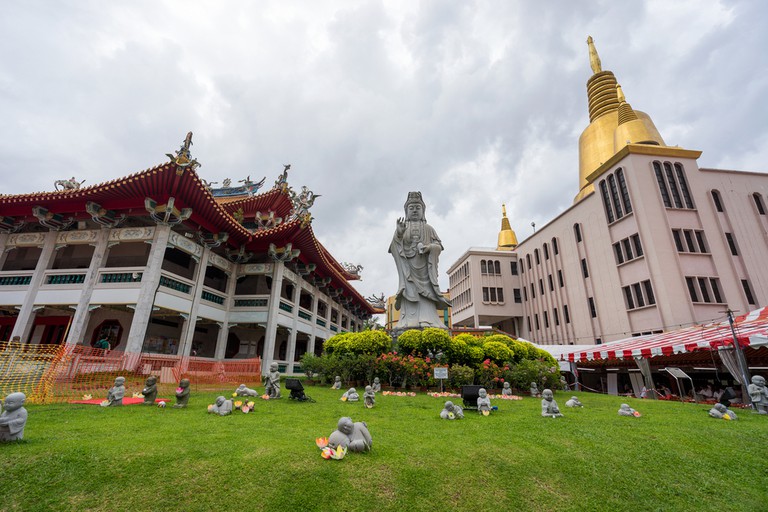 As the largest Buddhist temple in Singapore, this monumental structure is revered for the many services it provides to the local Buddhist population. It’s especially worth visiting during Buddhist festivals like Vesak Day. The architectural style shows some Chinese influence (which should come as no surprise given that most Buddhists in Singapore are Chinese). It also houses some unique artefacts like the Bodhi Tree, which is believed to be related to the very same tree Buddha attained enlightenment under, and a gargantuan bronze statue of Buddha himself – one of the largest found in Asia. 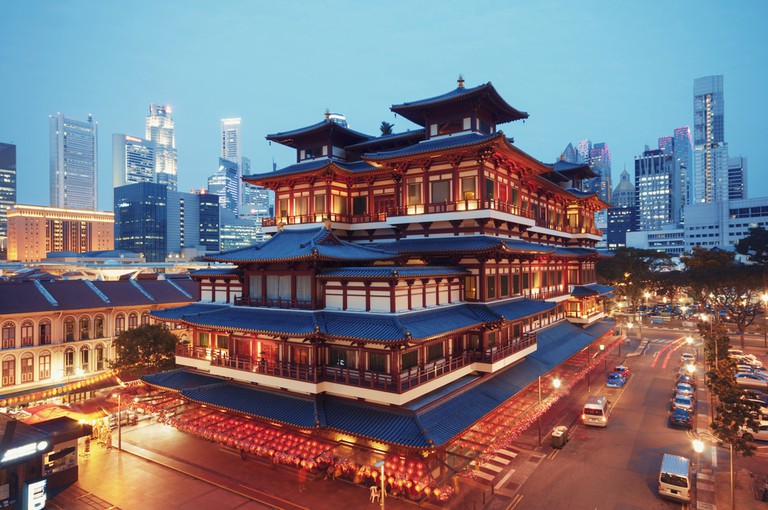 Absolutely impossible to miss when in Chinatown, this eye-catching temple is actually very new. Completed in 2005, it’s built along classical Chinese Tang Dynasty-inspired architecture. This massive edifice has fast become one of Chinatown’s most famous attractions despite its short history, hosting a brilliant museum and a number of Buddhist rituals and festivals throughout the year. Be sure to catch one for a glimpse of Singapore’s strong Buddhist traditions in full swing. 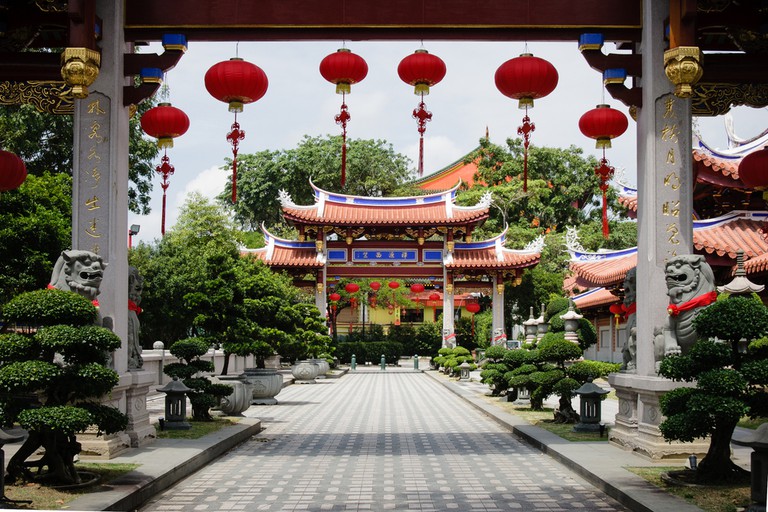 Singapore’s oldest monastery is a deeply mysterious structure, designed and built by an unknown architect. This stunning site is believed to be modelled after Xi Chan Si temple in Fujian province in China. Both temples are themselves famed replicas of Cong Lin style architecture, which is popular in Buddhist architecture across China. It boasts a strong distinctive regional influence from Fujian province, which can be seen in the beams and wood carvings. This gazetted national monument also boasts a seven-storey, gold-capped pagoda made famous by Instagram-happy visitors.

Wat Ananda Metyaram is one of Singapore’s oldest Theravada temples, constructed in 1925. The present building is remarkably very different from its predecessor, having abandoned traditional architecture for a more modernist look. Sheathed in white with striking edges and beautifully-crafted triangular cutouts, this temple has completely reinterpreted classical Thai style into something daringly contemporary. 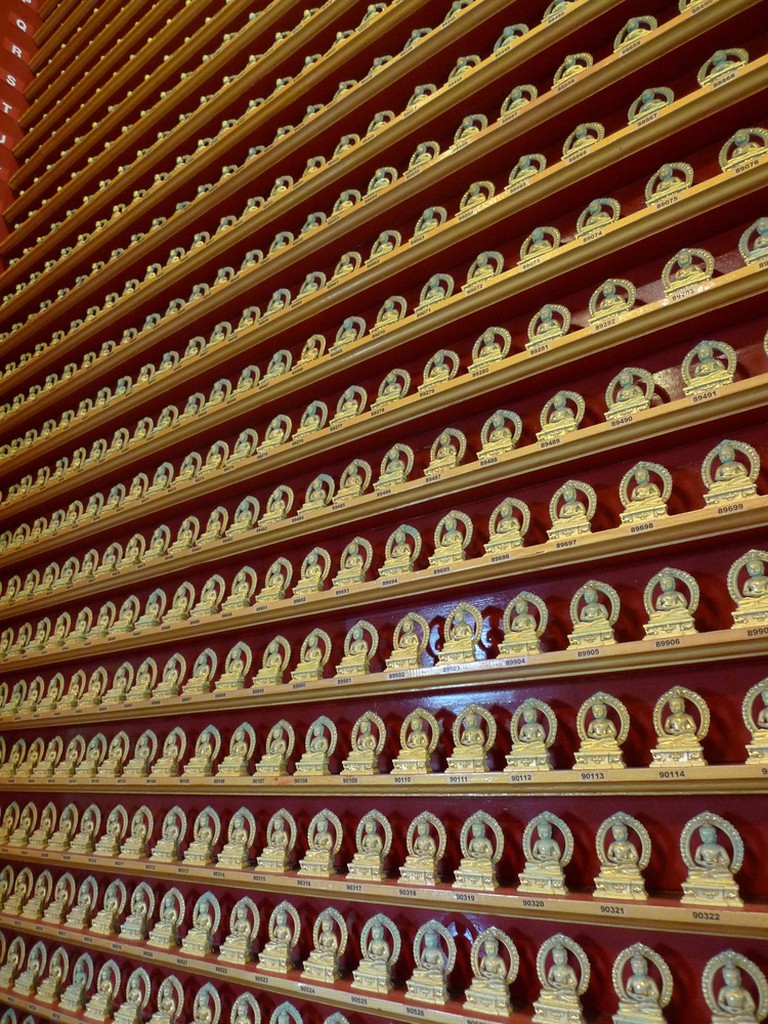 Also known as the ‘Temple of 1,000 Lights’, this popular devotional site built in 1927 is also part of the Theravada tradition, maintaining a decidedly more traditional appearance. Its mystical nickname has to do with the large 15-foot Buddha statue that greets you while you enter. If you look closely, you will see the eminent form is surrounded by the glow of 1000 colourful icon lamps. Visitors are also enchanted by the popular reclining Buddha statue and the frescoes depicting Buddha’s life and his quest for enlightenment. 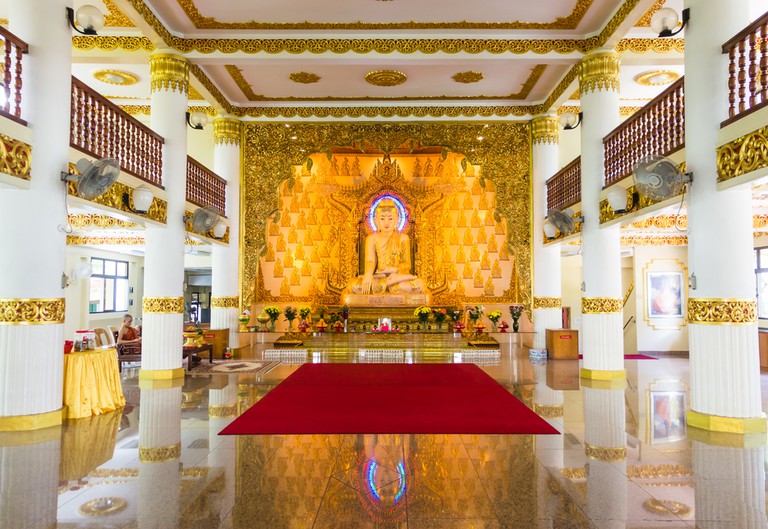 Otherwise known as Burmese Buddhist Temple, Maha Sasani Ramsi is considered the oldest Theravada site in Singapore and one of the city’s major claims to fame. Besides being an important cultural centre for the local Burmese population, the awe-inspiring, pure white marble statue of Buddha is is the largest of its kind outside Myanmar. Surrounding the statue is a vibrant light that shrouds the entire space in a golden hue, creating a striking and beautiful image. Also of note is the traditional Burmese architecture at the temple’s entrance, with gold embellishments topping off whitewashed walls. 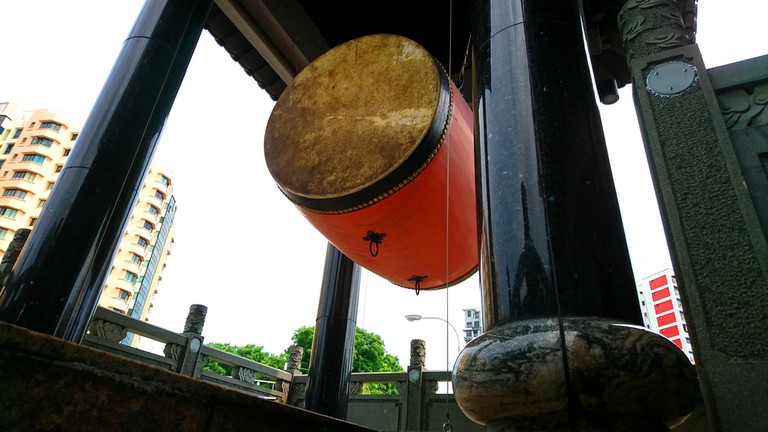 A striking Buddhist temple with all the classical hallmarks of Chinese architecture, this monastery is a perfect marriage of the Dharmic faith with Chinese features. The first thing you see upon entering is a statue of the bodhisattva (one who has attained enlightenment for the benefit of others) named Guanyin known as the Goddess of Mercy and revered in Mahayana Buddhism. She is seen as the feminine representation of Buddha and stands tall in the monastery, with her numerous divine hands jutting out at her sides. The building itself is painted in muted colours, which creates a sombre mood. Just beside it is a five-storey pagoda, whose top floor houses sacred relics belonging to the Buddha himself.

Hai Inn Temple is likely the most picturesque temple in Singapore, surrounded by lush greenery and nestled away from the city’s hustle and bustle. Founded in 1928, the temple itself is far more modest than usual, renouncing the grandiloquent appearance of other Buddhist temples. The temple is famous for its Brahma Bell, one of the largest in Singapore – ringing it is believed to calm the souls trapped in Hell. 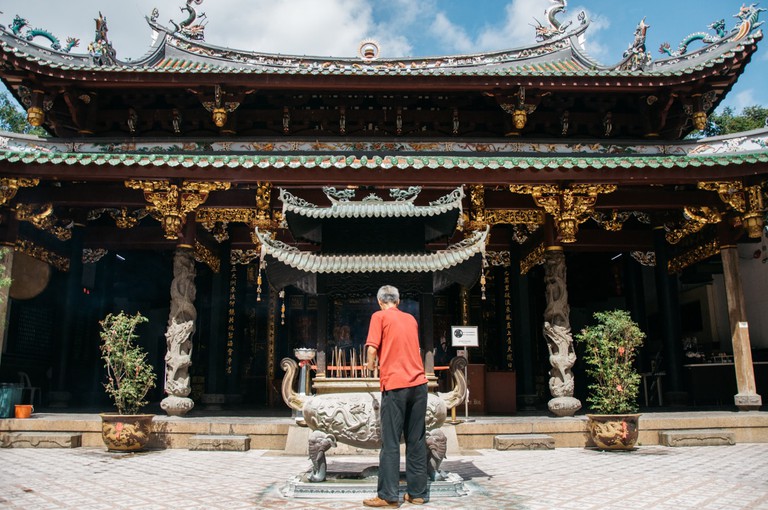 The Thian Hock Keng Temple is one of the oldest Chinese temples in Singapore, built in 1840 by the Hokkiens who hailed from the Fuzhou province. The temple is a showcase of southern Chinese architectural styles and assembled without the use of a single nail, with elaborate carvings covering the walls and roofs. Thian Hock Keng Temple was originally located along the coastline before land reclamation took place, and was the first port of call for new immigrants entering Singapore, giving thanks to their deities for helping them make the trip safely. The main deity is Mazu, the Goddess of the Seas, but the temple also encompasses Taoism, Buddhism, Confucianism and ancestral worship. 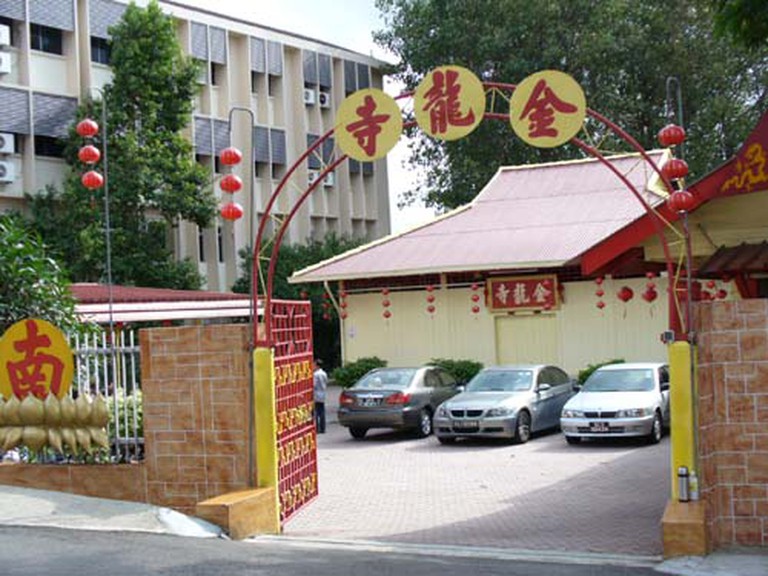 Essentially a Mahayana Buddhist temple but blending with Taoist and Confucian beliefs, Jin Long Si is worth the visit for its intricately carved reliefs and busts. The different corners of the buildings have huge dragons built on top of it, creating a beautifully animated space in one of the most decorative Buddhist temples in Singapore. The temple’s 120-year-old Bodhi Tree is also a significant feature brought over by Sri Lankan monks. Its deep roots and historic significance means it’s now a Heritage Tree and preserved without any alterations.