Singapore's 10 Best Contemporary Artists and Where to Find Them 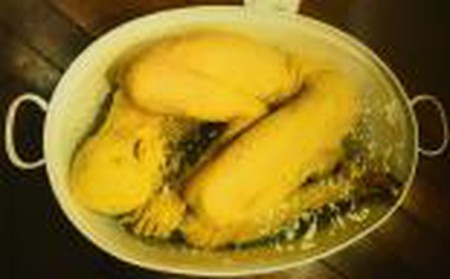 Singapore has become an Asian art hub in the recent decade, with substantial support from its government for the provision of arts and culture. Its relatively free and independent atmosphere amongst the diverse population has made it possible for a burgeoning art scene to thoroughly thrive. We profile ten of the best Singaporean artists who have, and still are, defining and transforming the city-state’s artistic landscape. 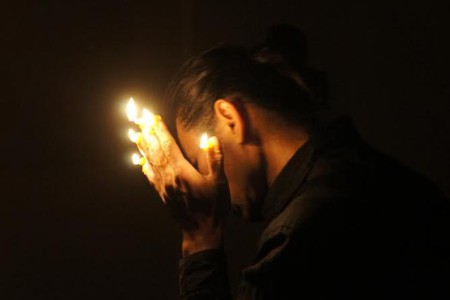 Jason Lim focuses his work on ceramics and performance art. In his recent creation Still/Life (2012), he merged ceramics with performance practice. Placing unfired clay objects into a glass vitrine, Lim poured water into the container and left the clay to slowly transform and dissolve, demonstrating how creation can lead to destruction and destruction to creation. Lim’s 20-year performance practice has evolved considerably. Beginning in 1994, the artist embraced performance as a more direct medium of expression. During the performance art ban in Singapore (1994-2004), Lim performed abroad and was involved in political and social commentaries, leading to his series Foreign Talents. Tempus Fugit, a retrospective at Gajah Gallery, catalogues Lim’s performance practice from the beginning to the present, featuring stunning documentary photographs of his performative works. His ongoing series Duet marks the artist’s recent tendency towards introspection, and a more meditative and self-exploring practice. Jason Lim is Artistic Director and Curator of Future of Imagination international performance art festival in Singapore.

Robert Zhao Renhui primarily works with photography. He investigates the various facets of the relationship between man and nature, and mankind’s curiosity for the environment. Based on concepts of uncertainty and doubt, his work tests the limits and principles behind the dissemination of knowledge and acceptance of truth. Much of his work is tied to a fictitious organization he founded, The Institute of Critical Zoologists, which aims to capture issues surrounding the exploitation of animals viewed through the lens of visual artistry. He is also affiliated to The Land Archive, an organization that aims to reveal the impact of man on nature from an artist’s perspective. In his latest series, A guide to the Flora and Fauna of the World, Zhao captures the fine line between the realistic and surrealistic aspects of nature. The artist explores nature’s changes, influenced by man’s intervention and manipulation. 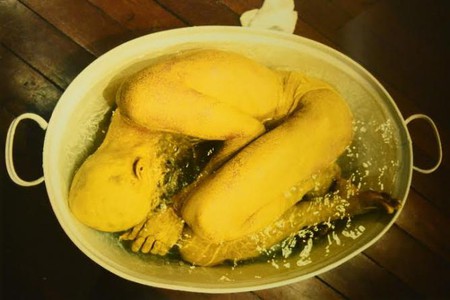 Lee Wen, Journey of The Yellow Man, performance photograph, in “Reverie of the Real” at SAM | © Choo Yut Sing/Flickr

Lee Wen is a multidisciplinary artist, whose pioneering performance-art practice revolves around themes of social identity. He is a member of The Artist Village (TAV) collective and the Black Market International (BMI) performance art collective. In 2003, he co-founded the Future of Imagination international performance art festival and he is Artistic Director of the Independent Archive and Resource Centre, a professional archive of visual art practices in Singapore. Wen is best known for his Journey of A Yellow Man series, in which he paints his body in bright yellow poster paint to symbolically exaggerate his ethnic identity as a Singaporean citizen and comment on issues of ethnic, collective and individual identities. More China Than You examines identity stereotyping, engaging with Wen’s personal history as an ethnically Chinese individual born outside of China in post-colonial Singapore. Neo-Baba questions identity, social realities and the impact of mainstream culture on society. Wen suggests that the possibilities and complexities inherent in hybridism offer values beyond that of homogeneity and singularity. 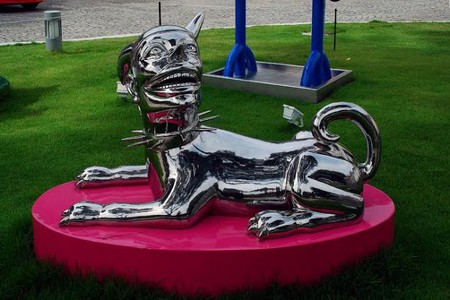 Vincent Leow, a pioneering figure on the alternative art scene. He embraces a variety of media whilst maintaining an element of anarchy and rebellion. In 1992, he became notorious for publicly drinking his own urine, a work later re-elaborated into the packing and sale of bottles of urine, The Artist’s Urine, as an incorporation of subversion into the mechanics of the market of consumption. Aggression and counter-culture underline his work, even in his later more meditative production. His retrospective Tags & Treats (2010) presents an oeuvre that deals with mortality and identity. Andy Warhol’s Pop Art is a continuing influence, from the Warholian repetition of objects in Mountian Cow Factory (1998), to his dog named Andy. In Andy’s Addiction, at the 52nd Venice Biennale (2007), Andy the dog became ‘the mongrel’, a mythological hybrid of animal and human elements, ‘transform[ing] something ordinary like a dog into an idealized deity’. In Tribute to Andy, Leow painted portraits with blacked out faces, exploring ‘the idea of what we still read when everything is blocked out.’

Tang Da Wu is a multidisciplinary artist who founded The Artists Village in 1988, the first art colony that encouraged experimental art in Singapore. Tang comments on environmental and social issues, such as deforestation, animal endangerment, urban transformation and national and cultural identity. He believes that individuals and the collective have the potential to influence and bring about social change. His seminal work Tiger’s Whip (1991) comments on the exploitation of tigers for the supposed aphrodisiac powers of their sexual organs. The tiger represents its vengeful spirit coming after its poachers, thus suggesting that mankind should take responsibility for its actions. Tang represented Singapore at the 52nd Venice Biennale in 2007, with Vincent Leow, Jason Lim and Zulkifle Mahmod, where his installation Untitled evoked ‘the restlessness, rootless-ness, spiritual wandering and emotional estrangement that mark the travelling life’. Bumiputra (2005-6), a set of ink paintings featuring portraits of people surrounding a well, nostalgically references the irrevocable transition of rural, traditional communities into modernized, urban areas.

Amanda Heng explores national identity, collective memory and social relationships, gender politics and other social issues in urban, contemporary Singaporean society. Much of her work has a collaborative element, engaging people who are not in the arts. As an influential female figure in Singapore’s art scene, she introduced feminist discourse locally by discussing gender inequality and social identity and established the Women In The Arts (WITA) collective (1999). In the performance Let’s Walk (1999), Heng and members of the public put high-heeled shoes in their mouths and walk backward using handheld mirrors to guide themselves, as a response to the downsizing of major companies during the 1997 Asian Financial Crisis. Heng was commenting on the superficial importance of appearance over ability: many women were ‘beautifying’ themselves in order to keep their jobs. Missing (1994) comments on female infanticide in cultures where male children were valued above females.

Ho Tzu Nyen probes into neglected histories by appropriating the structures of epic myths. He draws from moments when contemporary figures imagine and invent the past in order to serve the needs of the present. His video on myth and history, Utama – Every Name in History Is I (2003), depicts the explorers that discovered the island of Singapore in a series of 20 paintings. In the video, Utama – a Sumatran prince who arrived for the first time on the island and named it Singapura-singa (lion city) – takes on the role of himself and subsequently of various other conquerors or explorers, like Columbus, Julius Ceasar, Vasco da Gama, Capt. James Cook and Alexander the Great. The video constructs and deconstructs history and myth, mixing official accounts with rumour and imagined realities. At the 54th Venice Biennale (2011), Ho represented Singapore with The Cloud of Unknowing, comprising a single channel video projection with smoke machines in a darkened room. The work, named after a 14th century primer on monasticism, created ‘a sensory experience of uncertainty and doubt in in search for the divine.’ 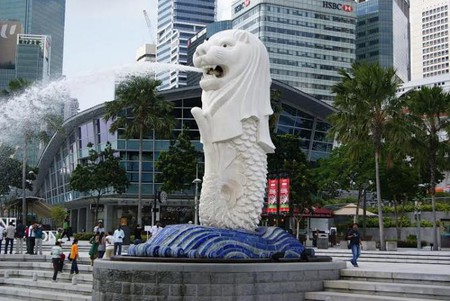 Lim Tzay Chuen questions our perceptions of aesthetic experience through intricate and complex engagements with the social, economic, cultural and political processes that define the contexts in which a work is situated. Lim is especially interested in revealing a particular moment in the thought process that pause between discovery and realisation. The intangible element and the invisible in his conceptual practice are pivotal elements that bring the visitor into a direct encounter with the artwork. For example, in Stray Alchemists (UCCA, 2008), when Lim released ten spiders roaming freely among the audience. At the 51st Venice Biennale (2005), Lim originally envisioned the transportation of Singapore’s Merlion – the national and cultural icon of the city-state – to the courtyard of the pavilion. Too costly and impractical a project, Lim produced instead an installation inside the pavilion, with a sign outside reading I wanted to bring Mike over. 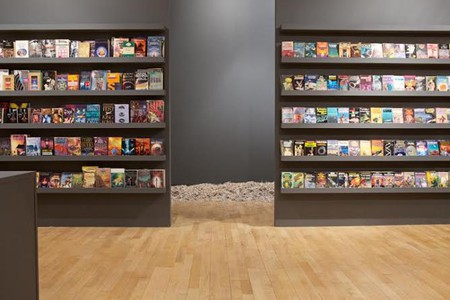 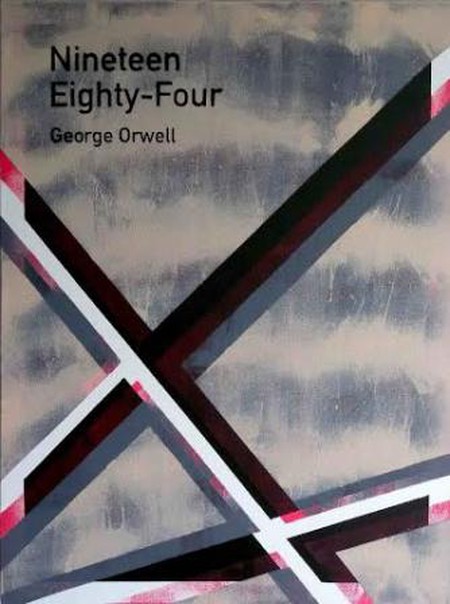 Heman Chong investigates philosophies, reasons and methods of individuals and communities imagining the future, creating installations, situations, objects, images and texts. Chong’s work is at the intersection of multiple genres, including visual art, performance, writing, installation and science fiction. In 2006, he produced a writing workshop with Leif Magne Tangen at Project Arts Center in Dublin, where he co-authored a science fiction novel PHILIP with Mark Aerial Waller, Cosmin Costinas, David Reinfurt and Steve Rushton. For LEM1 (2012), he created a second-hand science fiction and fantasy bookshop, where visitors could purchase a book for £1 and included a series of paintings of sci-fi books covers. By transforming what was implied in the paintings into a physical and social transaction, Chong was reclaiming science fiction as a force of social possibility. Chong’s conceptual practice builds a framework for the collective imagination of the future. Sci-fi, an already fictional and futuristic paradigm, lends itself to the artist’s exploration of our collective fantasy and subconscious.