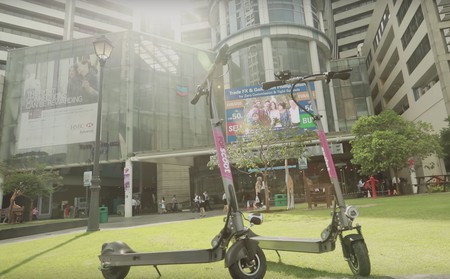 For those visiting Singapore, the perils of overheating while walking the streets can be very real. But a new trend is emerging which can make getting about much easier – and a lot less sweaty.

Electric scooter sharing services such as Popscoot are being set up in parts of Singapore, as a simple and easy alternative to walking around the city.

“Electric-scooters on-demand is the way forward for Singapore, due to its technologically-savvy population, compact urban layout and pro-car-lite Government. Our launch in September will be a major first step towards our goal of making e-scooter sharing mainstream in Singapore by making every journey affordable, convenient and enjoyable,” said Kelvin Emmanuel Ng, Chief Marketing Officer PopScoot in a press release.

“We hope to work with investors and partners to transform the last mile commute scene in Singapore and other smart cities around the world,” he added.

Temperatures in Singapore average around 31-33C all year, and although there is an extensive public transport network, people still have to brave the last mile from trains and buses to their final destination in the heat. Scooters on-demand attempt to solve that issue.

The number of people traveling by bus and rail is on the rise in Singapore, with a daily average of 7.2 million people using those methods of transport in 2016. The government has sought to complement this public transport with initiatives such as the National Cycling Plan and by upgrading supporting infrastructure.

There are several scooter on-demand services in Singapore, but they all follow the same basic mechanism. Customers download the app and join the service, and then scan a QR code on the scooter and drive off with it. Other companies providing scooters for hire in the country include Telepod and Floatility.