City on a Plate: Crossroads Cooking From Singapore’s Most Daring Chef 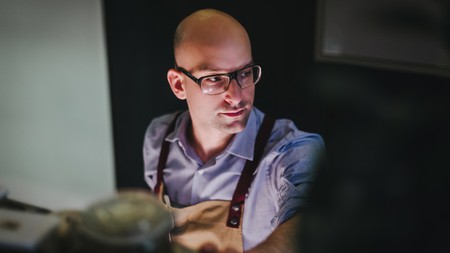 Culture Trip talks to the world’s most talented chefs about the cities that inspire them and the sights, smells and sensations that drive their approach to food. The indefinable, scintillating cuisine of Ivan Brehm at Nouri is as diverse and exciting as Singapore itself.

There’s fusion: the staid, faintly retro world of teriyaki barbecue sauce and buffalo chicken spring rolls. It’s a word that most serious eaters now roll their eyes at – a fad that exoticised the differences between our world’s cuisines. Ivan Brehm does not cook fusion food. What Brehm does at his restaurant in Singapore, Nouri, is something far more potent and bewitching – his style of cooking, which he calls “crossroads cooking”, is porous to all knowledge, techniques and flavours. Through studying history, anthropology and ethnography – as well as making his bones in some of the world’s best restaurants – Brehm wants to celebrate the brilliance of difference while also finding common ground with what we all like to eat, in pursuit of something you could almost term as objective deliciousness. 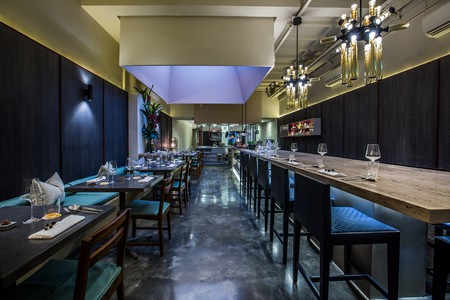 Nouri takes inspiration from around the world | | © Robin Thang

Brehm’s CV is truly stellar. He trained under Andoni Luis Aduriz at the legendary Mugaritz, Claude Bosi at London’s Hibiscus, and at Thomas Keller’s Per Se in New York, as well as taking time out to work in the rustic trattorias of Piemonte to educate himself in artisanal Italian food culture. Furthermore, he spent four years in the dynamic, groundbreaking test kitchen of the Fat Duck, pushing the culinary vision of Heston Blumenthal further and further as he moved from a science-led style of cooking to one led by history and nostalgia. These years of research and development opened up Brehm’s mind even further, to the culinary ties that bind us all and satisfy us no matter where we’re from.

As a result, the food at Nouri is of every culture and none in particular. The name itself has a dozen different meanings: to the Romans, “nouri” means “nourishment” (or “nipple”, as Brehm never tires of pointing out); to the Koreans, “globe”; to the Persians, “fire”. To Singaporeans, it has come to mean some of the most daring yet delicious food that you can find. Risottos come laced with Japanese chilli ferments and strewn with juicy carabineros prawns, while wagyu beef is daubed in Mexican mole sauce. Oranges are roasted for 48 hours until bitter and black and then filled with tea ice cream. Nouri is a restaurant where you ought to leave your preconceptions at the door and settle in for the ride. You may not know why the food works, but you will have no doubt that it does. Culture Trip speaks to Brehm about crossroads cooking, creativity and why Singapore is the perfect place for his idiosyncratic style.

I’m Ivan, and I’m a second-generation Brazilian, but more than that, I’m the grandson of immigrants from Germany, Italy, Spain, Russia, Syria and Lebanon. I understood at an early age that while everyone is different, there is a great deal that unites us; that differences are circumstantial, not essential; and that we should celebrate differences in a way that is constructive, by acknowledging first what we all share. I cook from that perspective. 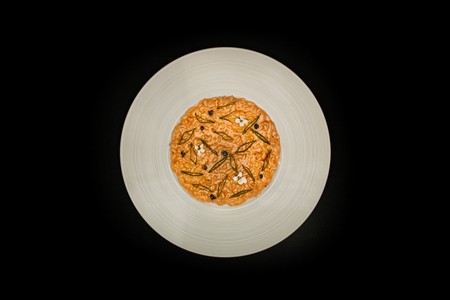 The kanzuri risotto is an explosion of flavours, with carabineros prawns, 25-year-old balsamic and nasturtium leaves | | © Robin Thang

There’s been several that I’d call transformative, I think. One that stands out to me is the first time I ate a porcini mushroom – it wrecked my evening! I was not prepared for a world of food so intense. I’ve not looked back since.

As biased as it may seem, Amoy Street, where my restaurant is located, captures everything I love about Singapore. It is the line between old and new, affluent and poor, nature and urbanity, steel and tile that embodies my thoughts about not just Singapore but the world right now and the moment of time we are in. So much of our collective histories have given way to restless modernity; I sometimes feel like I’m walking on immaterial ground, where nothing holds the weight of reality. Amoy Street represents a moment where these two realities are able to coexist – and indeed, support – one another, and this could only take place in a city as singular as Singapore.

Singapore, my adopted city, is a place of great multiculturalism. It is a young nation, by the world’s standards, that is still trying to establish and understand its own identity. Food is frequently used here in an attempt to find that understanding. Our tastes are intense: spicy and sour, sweet but full of umami. The flavours are even more diverse: prawns, coconut, garlic, chilli; pandan, basil, ginger flower, clove, star anise – a whole constellation of spices; vegetal, abundant greenery that surrounds the city in the trees and parks and forests. These flavours are the flavours of my city. 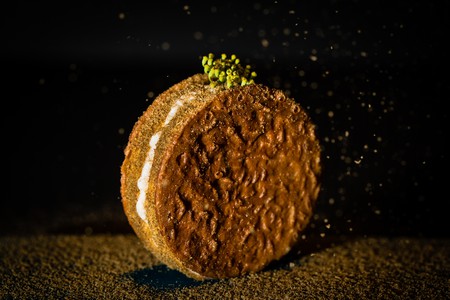 Singapore gets excited by food, of course, and a real love of the new. It is brought to life by the humour of its residents, their warm and humble smiles, their casual jokes and simple exclamations. You’ll hear “wa lao!” and “alamak!” everywhere you go, for annoyance or surprise – no other words are needed! We hate being ripped off, we hate being made fun of, and we have no time for disrespect – do unto us what you would do for yourself.

Easy: Ting Heng Seafood Restaurant – a small but perfectly formed seafood restaurant downtown that’s been around for generations – with all of my friends, at four in the morning. Not a minute earlier.

I would say our acarajé and vatapá dish, as it’s a dish that tells the story of the verifiable link between the food of South America and Southeast Asia. This dish, of Brazilian heritage by name, is emblematic of the many traditions that have populated this little Asian island. They’re little bean and onion cakes, fried to perfection and cut open to be filled with a salad of shrimp, chilli, crab, coconut and cashews. You’ll want more and more and more and more. 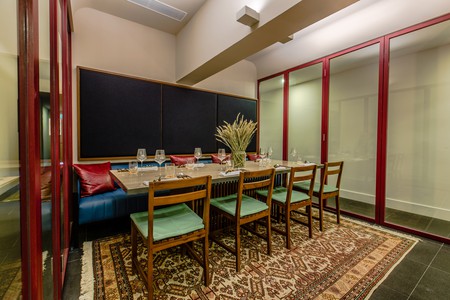 Ivan Brehm is the head chef of Nouri, a one-Michelin-star fine-dining restaurant in Singapore. Book a table, and keep up with them on Instagram.