A History Of The Float At Marina Bay In 1 Minute 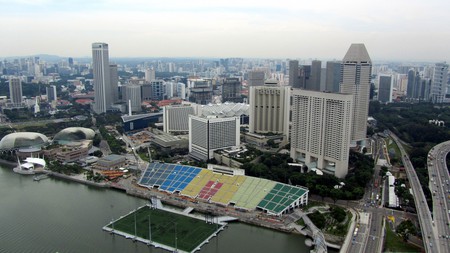 The Float at Marina Bay is a floating platform used to host a variety of high-profile athletic and internationally recognized entertainment events in Singapore. This outdoor venue holds the record for being the world’s largest floating stage (nearly the size of a football field). The platform is 120 by 83 metres (394 by 272 feet) accompanied by a 30,000 capacity seating gallery. Located less than a kilometre from the Central Business District and a five-minute walk from the Marina Bay Sands Hotel, The Float’s ideal location has helped it gain significance as one of Singapore’s most important event spaces.

Plans for The Float were made in advance of the 2007 National Parade since its regular venue, the National Stadium, had been demolished in preparation for a new, multi-use complex, the Singapore Sports Hub. Wanting to utilize Singapore’s impressive skyline, the organizers set up the float so that the skyline would make up the backdrop, as well as limiting the height of the seating gallery. Similar to the Sports Hub, organisers wanted The Float to be versatile in the events it could host, so it is actually made up of various smaller platforms. The structure of the floating platform is composed of two hundred pontoons that can be easily configured depending on an event’s requirements. 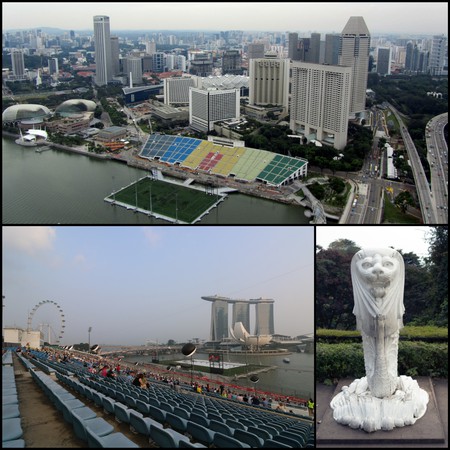 Originally, when plans for The Float were being created, the organisers were under the assumption that it would be a temporary stage for five years until the new National Stadium was completed in 2012 however, construction delays meant that the platform was needed for longer as well as being contracted for future events. Some notable events that have been held at The Float include the inaugural event, the 2007 National Day Parade, the 2010 Summer Youth Olympic Games and concerts by K-pop powerhouse Girls’ Generation. Currently, the future of The Float is unknown but as one of the seating areas for the Singapore Grand Prix, it is guaranteed to be hosting events until at least 2017.