History Of The Fountain Of Wealth 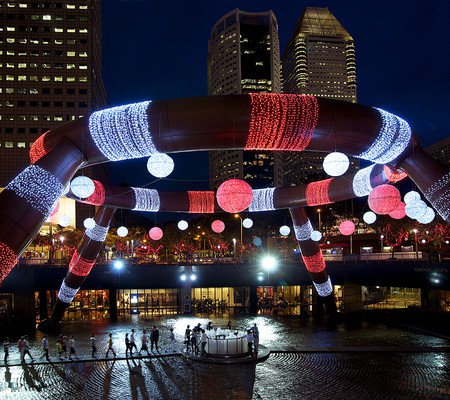 The Fountain of Wealth was built in Singapore in 1995 during the development of the surrounding complex, Suntec City. The inspiration for the fountain, and in fact the design of the office towers, becomes clear through a closer examination of the complex’s name. Suntec comes from the Chinese phrase xin da, which means ‘new achievement.’ Equipped with many food and beverage options, shops and entertainment venues, Suntec was designed to be a city within the city.

Suntec City was designed following the principles of Chinese geomancy, or feng shui. The Fountain of Wealth sits at the center of five office blocks that are meant to represent a hand coming out of the ground. The Fountain of Wealth appears as a gold ring in the palm of the hand symbolizing the preservation of wealth. The combination of these structures strives to create harmony and, through that, good fortune to the many people who work there. 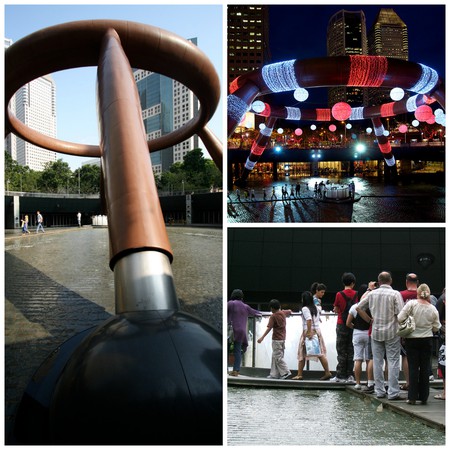 The Fountain of Wealth was built at a cost of $6 million and is an unmissable beacon of Suntec City. The bronze ring measures at a staggering 21 meters in diameter, which is supported on four sides by 13.8 meter-tall bronze pillars. The entire fountain covers an area of nearly 1,700 square meters, which led to it being listed in the 1998 Guinness Book of Records as the World’s Largest Fountain.

Water is one of the most powerful elements of nature according to the Chinese, because as a source of energy it symbolizes wealth and good fortune. For this reason, the water at the Fountain of Wealth flows inwards, representing the inward movement of wealth for all who witness it. To get even closer to the fountain, at various times throughout the day, Suntec allows visitors to walk around the fountain’s inner ring to gather coins and increase their prosperity. In the evenings, between 8 and 9:30PM, the 18 meter-wide water screen becomes the backdrop for a multimedia laser show that is watched by people sitting in the restaurants positioned around the fountain.
The Fountain operates daily from 9AM to 10PM. Daily times to walk on the Fountain’s inner ring are 10AM to 12PM, 2PM to 4PM, and 6PM to 7:30PM. Find more information here.