Fans of Kevin Kwan’s book series Crazy Rich Asians rejoice – the first book in a trilogy about the lives of a super-wealthy Singaporean family has made the jump from page to screen, and in the first trailer released by Warner Bros. Pictures, we get a look at some of the Singapore filming locations found in the Crazy Rich Asians movie and what you can see there.

While Singapore is the main setting for most of the Crazy Rich Asians story, much of the filming also took place in neighbouring Malaysia. Penang’s Cheong Fatt Tze Mansion aka the Blue Mansion features quite prominently, while the coastline of Langkawi and Malaysian capital Kuala Lumpur were also key shooting locations.

Watch the trailer and see how many of Singapore’s locations you can identify – read on to see if you missed any.

Arguably one of Singapore’s most recognisable icons, the unique Merlion statue makes its debut in the trailer against the backdrop of the Marina Bay Sands Hotel and the lotus-shaped ArtScience Museum. This unusual half-lion and half-fish symbol was created by the local tourism board and while there are actually several Merlion statues scattered around the island, this one near One Fullerton is the most well-known and photographed, so expect a ton of tourists when you visit.

Merlion Park at Marina Bay in front of One Fullerton | © Warner Bros. Pictures

The skyline around Marina Bay is used as an establishing shot of Singapore in the trailer, and in this one shot, many of Singapore’s must-see sights can be seen at a glance: Marina Bay Sands and the ArtScience Museum are easy to spot, as is the giant wheel of the Singapore Flyer, all set against the backdrop of the many skyscrapers found in the Central Business District and Marina Bay Financial District. There are a number of viewing spots around Marina Bay to enjoy a bird’s eye view and grab a bite as well.

The world’s most Instagrammed hotel features in many shots of the Singapore skyline, and of course its famous rooftop infinity pool makes an appearance, albeit with a rather odd night scene of an aqua aerobics class. Most of the time, this 55-storey-high infinity pool is filled with hotel guests taking selfies or lounging around the pool – not much actual swimming or exercise actually takes place. It is an excellent spot for fireworks, these mostly happen on Singapore’s National Day, New Year’s Eve or special events like the culmination of the Formula 1 Grand Prix. 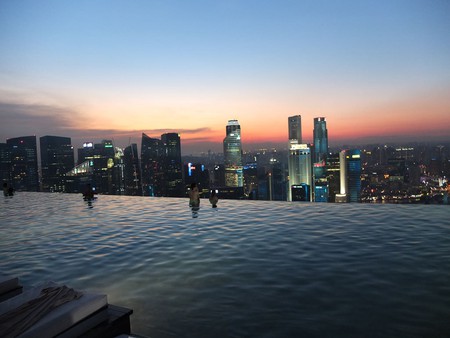 Gardens by the Bay

Another visual spectacle to be found in Singapore can also be seen in the trailer – the open-air Supertree grove of Gardens by the Bay is the setting of a Chinese-themed wedding reception for two of the main characters friends – Colin Khoo and Araminta Lee. Though the party was set at Fort Canning Park in the book, the alien-like backdrop of the Supertree grove is undoubtedly a much more spectacular sight at night even without a party set-up. The Supertree grove is usually free to visit and many tourists enjoy the light and music show that takes place every evening.

Party under the SkyTrees at Gardens by the Bay from Crazy Rich Asians | © Warner Bros. Pictures 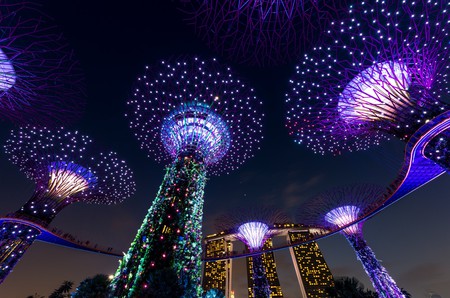 While the wedding of Colin and Araminta took place in the books in the fictional First Methodist Church, the movie uses the nightlife hotspot CHIJMES (pronounced ‘chimes’) instead. While most people visit CHIJMES to patronise their many bars and restaurants today, CHIJMES was once a Catholic girl’s school, and the beautiful 19th-century chapel with its Gothic-style arched ceilings and detailing along with intricate stained glass windows is used as an event space for a variety of occasions. 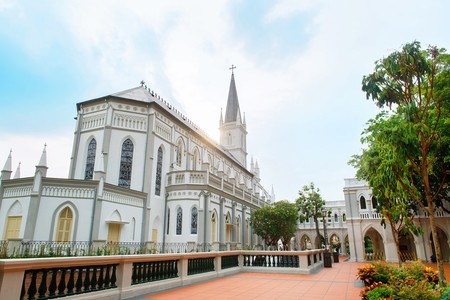 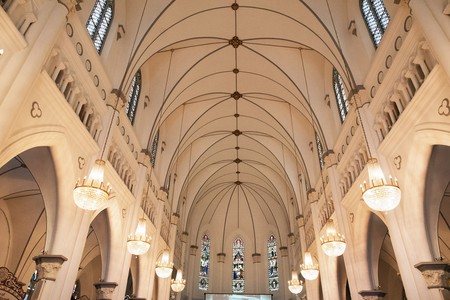 In the Crazy Rich Asians trailer, Constance Wu and and Awkwafina’s characters Rachel Chu and Goh Peik Lin are seen having a conversation at an alfresco bar table located along Bukit Pasoh Road. This stretch of road in the Tanjong Pagar area is lined with quaint shophouses, carefully preserved as a conservation area and housing a selection of boutique hotels and hip restaurants amid more traditional clan association houses.

Hawker food is a big part of Singapore’s culture, and even wealthy Asians love their hawker food – the first thing that main protagonists Nick Young and Rachel do upon arriving in Singapore was head to a nearby hawker centre for a local food feast with their friends Colin and Araminta. Though they originally decided on visiting the historic Lau Pa Sat in the book, it seems like they ended up heading to Newton Food Centre instead in the movie, a tourist favourite and incidentally author Kevin Kwan’s favourite hawker centre as well. 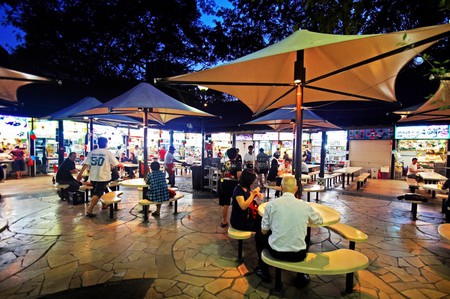 Newton Food Centre | © Singapore Tourism Board
Give us feedback