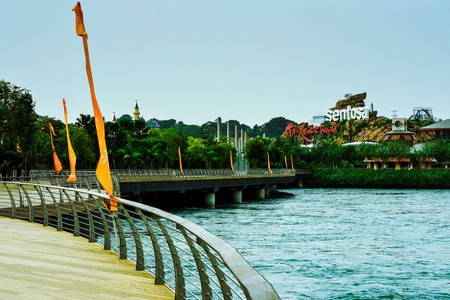 Sentosa, located off Singapore’s southern coast, is essentially a giant amusement park. The island, visited by over 20 million people a year and standing largely on reclaimed land, is a major attraction in Singapore for tourists and locals alike. Although it mainly caters to families, the large range of things to see and do means that everyone can find an activity that they will enjoy.

Get to the Island

Even getting to the island counts as an activity because you have several different options available. Besides just driving in, or taking the above ground train, two exciting ways to get to the island are the newly revamped Sentosa Boardwalk and the Singapore Cable Car. Access both from VivoCity, the shopping mall at HarbourFront MRT. The Cable Car offers you beautiful views of the port and the island itself as it passes over Mount Faber before doubling back and heading to Sentosa Island. Your ticket also gives you one trip on the new Sentosa Island, so you can enjoy riding over the jungle and beaches on the island itself. The Boardwalk is a nice, relaxing way to get to the island and has recently been revamped to include a handful of restaurants and if you’re too lazy to walk, there’s even a travelator!

Chill Out On The Beach

Sentosa boasts three beaches: Palawan, Siloso, and Tanjong. Generally speaking, Palawan is geared towards families whereas Tanjong and Siloso are popular with young people looking for a secluded spot or to party in the beach bars. The water off the coast of Singapore is a bit murky due to it being a large harbor, but it’s still a nice place to lie in the sun. Pick up your drinks from the 7-11 or hawker near Siloso to save money!

Adventure Cove is a waterpark that is fun for people of all ages. Besides being an excellent place to cool down from Singapore’s equatorial climate, this water park truly has an impressive range of attractions, from the Riptide Rocket, Asia’s first hydro-magnetic coaster, to Rainbow Reef, a cold water snorkelling pool filled with hundreds of fish. Looking for something less chaotic? Try rafting down the lazy river and through the underwater tunnel where you can see manta rays from unbelievably close up.

Get A Bird’s Eye View of the Island

Tiger Sky Tower holds the distinction of being the tallest freestanding observation tower in Asia. It is unique from other observation towers in the sense that it is essentially a giant, circular glass elevator. Visitors enter a cabin which then slowly revolves as it makes the gradual ascent at 1.2 metres/second to 110 metres above the ground. Standing 131 metres above sea level, visitors can enjoy breathtaking views of the Sentosa island, the bustling Central Business District of Singapore, as well as Southern Islands Kusu and St. John’s. On a clear day, you can see as far as parts of Malaysia’s Jurong Bahru and even the Indonesian islands Pulau Bintan and Pulau Batam.

When was the last time you've checked out the view of Sentosa from the top of the Tiger Sky Tower? #thestateoffun #tigerskytower #sentosa #sentosaisland #singapore #visitsingapore #travel #sgig #igsg

The Crane Dance is something that must be seen during a visit to Sentosa island. Luckily it is performed daily at 8pm and admission is free. The crane dance features two immense, electronic cranes performing an intricate dance of courtship and love. These “cranes”, standing at ten stories tall are the largest dancing animatronics in the world. The show involves several mediums including music, video screens, water, lights, and fireworks — it really is an impressive spectacle clocking in at just under ten minutes.

Today on Sentosa island, we saw a random #fireworks and water show (that apparently happens every day) from our beachside table and then on the way back came across this robot crane water show love story. Yeah I don't know either but it was an awesome day!

From Palawan beach, cross the rope suspension bridge to the southern-most point of Continental Asia. Although it is unclear how a tiny island, off the coast of an island that is off the coast of yet another island is considered continental, there is a sign offering some kind of explanation. Plus, you can tell people that you reached the southern-most point of Continental Asia, and really, that is what matters.

Get An Adrenaline Boost

Looking for some excitement? Sentosa Island features a whole range of activities for thrill-seekers. iFly is an indoor sky-diving simulator. At nearly 60 feet high, this freefall will give even those who love heights a considerable challenge! Another activity, the Megazip, is a 450-metre long zip-line that will have you hurtling 72 metres above Siloso beach at breakneck speeds of up to 50 kilometers per hour. More heart-stopping adrenaline-fuelled activities can be found at the Wave House and the Skyline Luge.