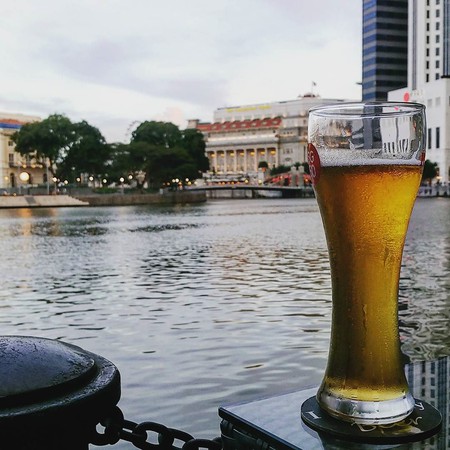 Over the past few years, craft beer has become very on trend in Singapore. Unlike other food scenes, this is ideal for people who live in Singapore where the cost of booze is high. It’s much better to throw down $20 on a pint of locally brewed or imported craft beer as compared to a pint of Heineken or Tiger. This is our list for the best places to get your craft beer fix and for reference, the symbol ‘++’ next to prices means that a 10% service and 7% tax are added to prices whereas ‘nett’ means that the price is inclusive of taxes and service.

The best-known microbrewery on the island, Brewerkz serves from several locations around the island, including picturesque waterside locations at Riverside Point and the Sentosa Boardwalk. They have several permanent beers on tap, as well as a constantly rotating seasonal beer. They have a great lunch deal — if you get there between noon and 3pm, you can get lunch with a pint for $20++ and pints run at just $7++ during those times as well. Several locations also offer carry-out bottles or growlers. To see the beers and locations, visit their website here.

Another well-known microbrewery, Level 33 boasts that it is the world’s highest microbrewery, perched atop one of the Marina Bay Financial Centre towers. Inside the bar, the first thing you will see are their stills, sitting in a row in the middle of the bar. Beers here are quite pricey, however, if you make it for their daily happy hour between 5pm-8pm, a pint will set you back 13.33++, which is similar to most other places on the island. The other benefit of getting there early is being able to snag one of the outside tables next to the ledge so you can enjoy sweeping views of the Central Business District, Marina Bay, and the Marina Bay Sands Hotel.

Tucked away on Magazine Road near the Holiday Inn Express on Havelock Road, Alchemy is not exactly easy to find, nor one that you’re likely to stumble across. They carry an impressive range of excellent craft beers from all over the world. The vast selection would be intimidating were it not for the very friendly owner and staff who will help you to choose a beer based on your tastes and preferences.

Smith Street Taps shares the same floor of Chinatown Complex with The Good Beer Company (imported bottles) and Craft Beer (very, very tiny brewery — the beer is made right in the hawker) and is in fact the midpoint between these two places offering five craft beers at any time. Check their Facebook page to see what’s on tap (and to make sure they’re open!). Pricewise, it also falls between Craft Beer and The Good Beer Company at about $10 nett a pint.

Tap into your craft beer mojo at a hawker centre (an open-air complex housing stalls selling a variety of inexpensive food) when you are next in Singapore. Lauded by The New York Times as the centre of the local craft beer scene, #SmithStreetTaps nestled in the heart of Chinatown Complex, is the first hawker stall to serve craft beer on tap. Look to owner Daniel Goh for his advice on beer pairings with Singapore's local food. Heavenly matches are guaranteed. #gothere: It’s a short walk from @amoyhotel to Chinatown Complex. Smith Street Taps is on the second floor. Narrow down the search by looking for bunches of happy people with beer glasses. Need more directions? Our front desk staff at @amoyhotel will gladly assist you. #amoyhotel #boutiquehotel #smithstreettaps

Little Island Brewing Company (LIBC) remains relatively unknown due to its far-flung location near the Changi Ferry Terminal, but that location makes it the perfect place to relax with some food and good beers after a day of cycling around Pulau Ubin. They offer approximately six beers on tap that you pull yourself. The entire system works with a contactless payment card that you purchase when you first arrive at the bar. The beer is priced by volume so unlike anywhere else on the island, there is no cost difference to getting a half pint versus a full.

This bar gets its name because it is settled into the ground floor of of the Singapore Chinese Druggists Association and with the exception of a small kitchen in the back, have left it mostly unchanged. The small details of the bar — the tiny-tiled floor and the wooden furniture add to what is already a great bar. Druggists has 21 taps that are constantly changing and pour a diverse range of beers from all over the world. The beers here are not cheap so we recommend sticking with the half pints so you can try a few different types. And if you’re not certain about a certain beer, ask the staff for a taster. They are very accommodating as well as being skilled at making recommendations.

Easily the most difficult to find of the bars on our list, Lepark is located on top of the sixth floor of the People’s Park Complex (the yellow and green HBD block in Chinatown). And don’t make the mistake of thinking it is closed when you step out of the stairwell! The heavy metal door does wonders to block sound and you’ll be pleasantly surprised to be greeted with the choice of about 30 different craft and microbrew beer bottles ranging from $12-20 nett from all over the world. On weekends, Lepark often holds concerts in the open parking lot next to the bar so keep an eye on their Facebook page if that’s your thing.