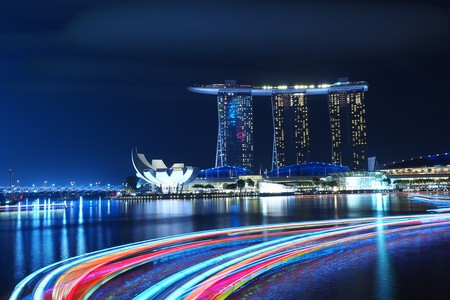 A common misconception about Singapore is that the young country hasn’t had the time to develop an interesting history. This is wrong for several reasons; much of Singapore’s history comes from the 1800s, when the island was founded by Sir Stamford Raffles, and even into the 1980s, when commercialisation meant many of the old buildings were torn down or renovated. Here are five Singaporean streets with a fascinating story behind their names.

The neighbourhood of Bugis gets its name from its original settlers, Buginese traders from Indonesia. However, the history takes a fascinating turn when you jump forward to the 1950s. For post-war Singapore, Bugis Street was the home of the island’s alternative culture, with the area frequently hosting transgender events in the middle of the night.

Bugis Street is thought to be the inspiration behind Leonard Cohen’s track Boogie Street. The Canadian singer-songwriter visited the city-state in 1980 and 1985, during the heyday of its counterculture. In an interview with Maclean’s, Cohen shares his experience, “There is an actual Boogie Street in the world. It’s in Singapore. I don’t know if it’s still there … And at night, it was a scene of intense and alarming sexual exchange. Prostitution, and … everything seemed to be available.”

Today, unfortunately, the real Bugis Street has been a victim of commercialisation and is now the cobblestone road and courtyard that passes through Bugis Junction. All that remains from its rich history is a maze of small shops selling souvenirs and clothing.

Originating from Hokkien, the colloquial phrase ang mo means ‘red-haired man’ and is often used in Singapore to refer to Westerners. So, it’s believed that Ang Mo Kio, which translates to ‘Westerner’s Bridge’, refers to the Caucasian who built it. The alternative history is much darker: legend has it a British woman known as Lady Jennifer Windsor lost her three children, who were caught and drowned in a flash flood. However, it’s said that when only two of the bodies were found, Lady Windsor felt compelled to spend the rest of her life at the bridge in hopes of finding her daughter. For decades after the original incident, local residents reported hearing the ghostly sounds of a child crying close to the bridge, but could never find any logical source for the haunting sounds. 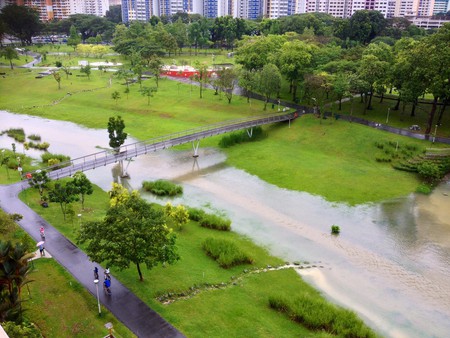 The earliest record of Middle Road is on an 1836 map of the island. Although the road’s etymology is a bit mundane – literally named for being located between the European and Asian settlements of Singapore – it is the interaction between these communities that made Middle Road interesting. Until the outbreak of the Second World War, the street was popular with both Hainanese and Japanese immigrants and lined with eateries and brothels. This Hainanese community was home to Ngiam Tong Boon, who would later achieve fame as the inventor of the Singapore Sling while working at the Raffles Hotel. Although the Japanese community flourished in this area for many decades, they were banned from entering Singapore in the years following the war, contributing to the ruin of the once-thriving area. 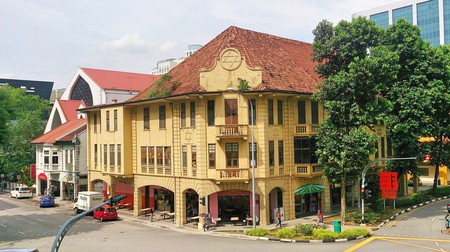 Today, Orchard Road is one of the largest collections of malls in the world, with enough designer labels to rival Saks Fifth Avenue. In the early 19th century, however, it was a thoroughfare that connected a series of fruit and spice orchards. And by the latter half of the century, Orchard Road also had many graveyards, which were later demolished to make room for developments like Ngee Ann City and the Dhoby Ghaut MRT Station. 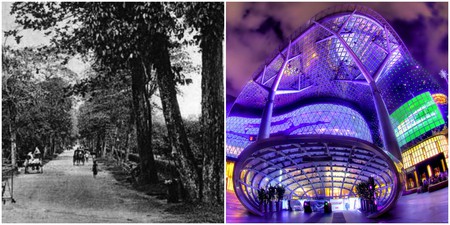 Smith Street is very popular with tourists today because it’s home to the traffic-free Chinatown Food Street, an open-air hawker stall that’s sheltered by a cleverly designed glass overhang. Located in Chinatown, Smith Street stands out as the only road in the area with a name that has no Chinese or Malay ties. In the 1920s and 1930s, the area was popular for a different reason when the street was lined with food stalls and brothels. 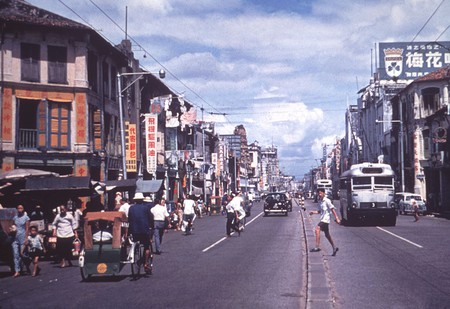 Chinatown in Singapore, 1965 | © Serendigity/Flickr
Give us feedback