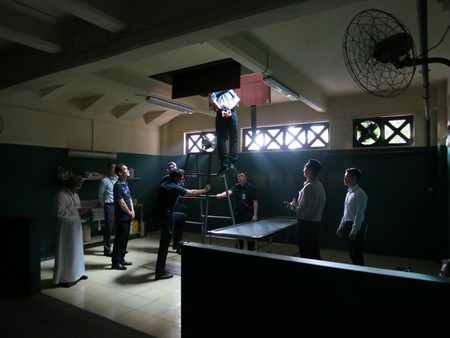 Behind the scenes of Apprentice | Image Courtesy of James Page Design

If you haven’t seen it yet, there’s no better time than the present. The critically acclaimed Singaporean film Apprentice centers around a young Malay correctional officer and his time working in prison and forming a relationship with the chief executioner. Receiving rave reviews at Cannes, the movie has riveted audiences with its compelling narrative and atmospheric set. The Culture Trip asked production designer James Page about his contribution.

How did you get involved in this project?

I was fortunate to be asked to design Boo Junfeng’s original feature film Sandcastle. That was in 2009-10, and then I consistently worked with him on a lot of his TVCs [television commercials] for Zhao Wei Films up until this feature. When he asked me to do Apprentice, obviously it was a straightaway ‘Yes’, because of my history of working with him as well as the fact that he’s a fantastic director. The script was so well-developed and it was really refreshing to work on something where obviously a lot of time and research had been laid down before production had started.

How was it filmed?

We had the major challenge that the film had to be based in a prison, and not only a maximum security prison, but the action largely residing inside the gallows as well. In other countries, like the US, this would not be such an issue but we knew from the start, there was no way we would gain access to any prisons here to do location filming.

It was decided that the best approach was to weave multiple locations together, resulting in the prison being a patchwork of two separate Australian gaols, St. Johns Ambulance Head Quarters, the old Raffles Institute, an office in Woodlands, Goodwood Park Hotel and a set! So when you see the film, where Aiman is walking from the prison gates to the execution room, it can be starting in St. John’s, go to one of the prisons in Australia, go to another prison in Australia, and end up in Singapore. This was obviously a great challenge, not only with the design, but also with the actors, camera movement, and lighting continuity. Junfeng and Benoit Soler [cinematographer] did an amazing job. 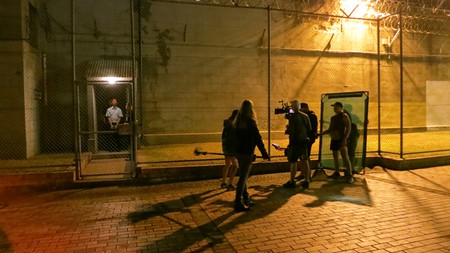 Behind the Scenes of Apprentice | Image Courtesy of James Page Design

What did your job entail?

Generally, my job covers what you see in terms of set and props – working very closely with Junfeng and Benoit to create an entire look and feel to the film that’s consistent, specifically in terms of the colour palette, but also how the spatial treatment of the scenes can reflect the characters and mood of the story. In addition, especially in the case of this film’s subject matter, research was vital, to really explore as closely as possible the process of hanging. 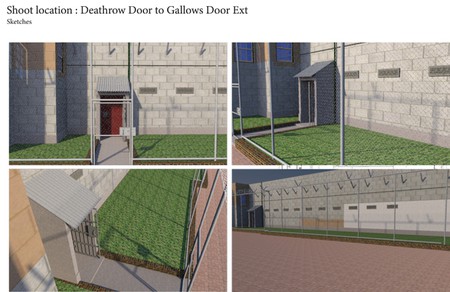 How did you go about your research?

Creatively, we decided that the prison shouldn’t be a modern prison, and it should be a slightly older, colonial building for character. The system of the trap door, the hooding before you enter, the technical design of the elements is basically correct.

The key with the research is to gain as much knowledge as possible but be prepared to let some of it go. An example would be the prison cells. We had to work with the ones which were available in Australia but they are definitely not representative of Singapore prison cells. However, for purposes of the film and its narrative, it is not a problem, and as always with low-budget art-house films, compromise is necessary. 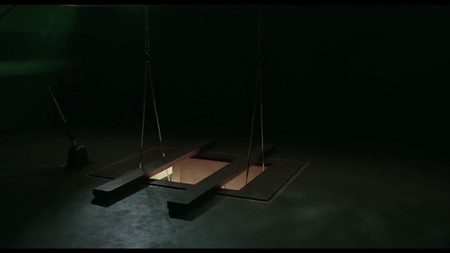 Did you glean the most insight from your research or through shooting the film?

Of course, it’s impossible to do all the research into the death penalty and not form an opinion. However, I feel the greatest success from this film is the ability to not cast or force an opinion on its audience but rather represent a narrative which leaves the audience to generate their own conclusions.

Rather depressingly, the main thought that I was left with, after all the research and filming was done, was that if I had to be executed, I’d probably choose hanging. Because when it’s done properly, it’s definitely instantaneous. There is an element of humanity in all of the inhumanity. The Singapore system has worked out the exact proportion of weight to rope, so it doesn’t decapitate you, and it doesn’t strangle you — it just breaks your neck.