10 Singaporean Fashion Labels You Should Know

Beginning as a manufacturing-based market in the 1980s, the Singaporean fashion industry has grown to become one of the largest textile and apparel hubs in the Asia-Pacific, second only to Hong Kong. Home to a plethora of contemporary designers that specialize in everything from mass-produced items to luxury and couture merchandise, Singaporean fashion is quickly gaining international acclaim. Here are the ten fashion labels and designers you should know. 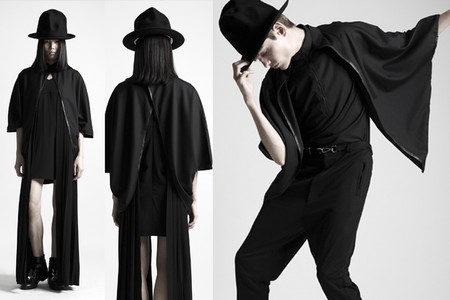 DEPRESSION is a collaboration of designers Andrew Loh and Kenny Lim. Although an odd name for a fashion label, the name stems from the personal experiences of the two designers, who began this collaboration while they were both experiencing depression. However, the name now stands as a symbol of their accomplishments and as a reminder of resilience. This line produces edgy unisex designs, often with a deconstructed style, and employs elements of irony and dark humor to produce a somewhat eerie aesthetic. DEPRESSION has been worn by many artists, including Adam Lambert, and Taboo from the Black Eyed Peas, who have both been spotted wearing shoes designed by these two Singaporean designers. Since DEPRESSION’s founding in 2006, the two designers Kenny and Andrew have also created ANTIDEPPRESSENT and NOT COOL ENOUGH, which both offer a drastically different style and focus on more modern and trendy pieces geared towards a younger audience.

A graduate of the London fashion school, Central St. Martins, designer Jo Soh began her career in London before moving on to work in New York, Milan, and Singapore. Her ready-to-wear women’s wear line, Hansel, which debuted at the 2003 Mercedes Australian Fashion Week, gained its name and logo from her puppy – a Jack Russell terrier. Like a puppy, Jo Soh’s line is cute, playful, expressive, and attention grabbing. Preferring to make wearable pieces with bright and casual fabrics, Jo Soh’s style is refreshingly original and modern. Not only has this line received a handful of awards including the 2009 ELLE Awards, but it also counts international icons like Katy Perry and Japanese actress Chiaki Kuriyama amongst its many fans. 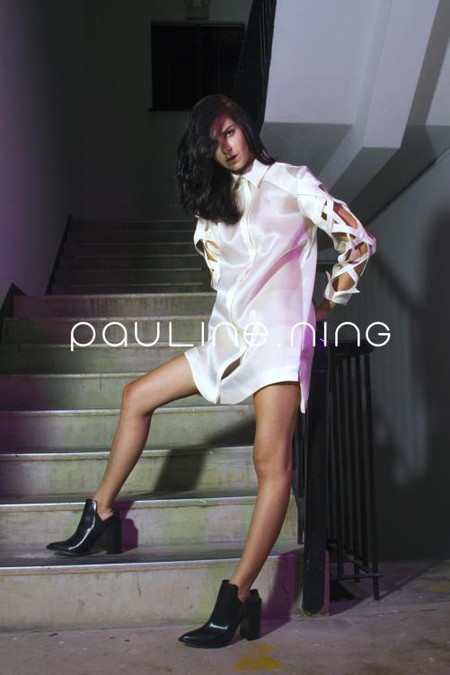 After graduating from Singapore’s LASALLE College of the Arts in 2009, Pauline Lim founded her eponymous label Pauline Ning. Offering slightly edgy designs, this line depends on layered fabrics, neutral colors, and distinctly feminine silhouettes in order to produce a sophisticated yet contemporary look. Personally involved in the drafting of each piece in her line, Lim finds inspiration in the study of historical artifacts, and often spends hours researching in the library before designing a new piece. Lim balances soft fabrics with structured shapes in order to create contradicting yet appealing designs. Her unique understanding of geometric design that is responsible for her truly distinctive products. Having already produced seven lines since beginning her career in 2009, Pauline Lim is sure to keep making waves in the fashion world.

Also a LASALLE College of the Arts graduate, artistic genius Lionel Low launched his fashion line, Lion Earl, in 2012 with the help of architect Hariz Lim. Strongly influenced by the ‘new Dior’ look of the 1950s, this line works with and accentuates the natural curves of the female body. Taking an extremely experimental approach to fashion, Lionel manipulates fabrics and combines them with contemporary digital prints in order to make fun and stylish clothing. Drawing their inspiration from music, painting, geometric shapes, and historical architecture, Lion Earl’s unique style has been described as both ‘genre-defying’ and ‘trend-defining’.

This street-wear label is a collective made up of designers Shaf Amis’aabudin, Daniela Monasterios Tan, and Nathanael Ng, all of whom are graduates of the LASALLE College of the Arts. Like musical mash-ups, this line is anything but conservative and depends on a style that uses a combination of different trends and looks to produce new and exciting designs. Influenced by popular culture and cinematography – and reliant on brightly hued colors, fun shapes, and attention-grabbing graphics – this line is aimed at an audience in their late teens and early twenties that really want to make a statement. Although undeniably unconventional, this collective has the rare ability to turn an alternative style into wearable clothing.

Avant-garde designer Pang Ai Mei founded her line Mae Pang in 2009, the same year that she was chosen to represent Singapore at the Raffles City Fashion Festival. Since then she has been featured in Italian Vogue, Harper’s BAZAAR, W Korea, and many other fashion publications. This label offers drastically different looks throughout its various collections. In the ‘Natural Artifice’ collection, the designs are loose fitting pieces that use muted colors like grey, navy blue, green, and black; while the ‘Phantasmagoria’ collection, which was influenced by the Gardens of Versailles outside of Paris, emulates the spontaneity of nature and the otherworldly qualities of the statues and trees found in elaborate gardens. Most of the Mae Pang label offers a laid-back look that makes Lim’s designs ideal for cocktail parties and casual dinner. 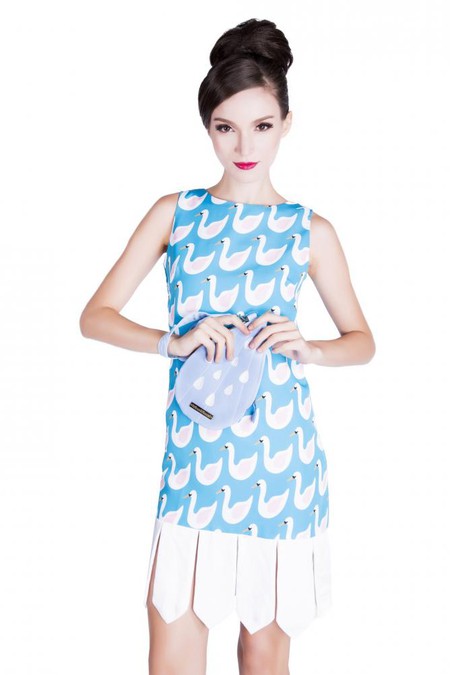 Meaning ‘Christmas Devotion’, and created by designer Eileen Yap, this label seeks to embody a ‘Thanksgiving spirit’, and has a playful and light-hearted air to it, focusing on accentuating the natural feminine figure with tailored designs and structure shapes. Offering pieces in everything from pastel colors to a more muted palette, this line is preppy rather than edgy, with a mix-and-match collection of cute pieces and vibrant patterns that scream stylish femininity and fun. Yap’s latest collection, Mirror, which has been influenced by the angles and cuts of glass, is a monochrome approach to 11 different styles, including dresses, tops, skirts, and outerwear. Already famous for being the first brand to offer fitting and styling before purchasing on their online shop, Noël Caleb plans to continue in its trendsetting path and has just recently opened its first concept store in Orchard Central.

Independent designer Genevieve Goh is the mastermind behind the thought provoking label, 20:TwoThree. With this label, Goh takes an artistic and experimental approach to fashion, in which she aims to use her designs to encourage consumers to pursue the truth and to ‘explore their own awareness’. In her line, Awakening, she combines different textures and structures to create pieces that can be interpreted in multiple ways, allowing for the customer to create their own understanding. The designs themselves rely on neutral tones, androgynous shapes and light fabrics blended together to create an extremely minimalist and unassuming look.

Created by designer Mia Gigandet in 2011, Emblem began as a label committed to making shoes. Gigandet uses traditionally feminine patterns like polka dots and snakeskin, as well as fun features like lace, tassels and bows, in order to create adorable, enthusiastic, and eye-catching designs. Not only dedicated to creating attractive shoes, Emblem’s philosophy stresses comfort, and relies on quality materials that prevent blistering. Emblem heels also include extra cushioning to make them easier to walk and dance in. Although beginning as a shoe label, Emblem now also sells designer bags. 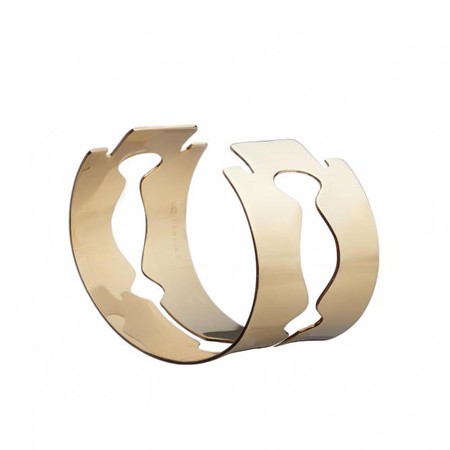 After learning how to silversmith in Florence, Carolyn Kan created the designer jewelry label Carrie K. This label aims to challenge preconceptions by reimagining everyday objects to demonstrate that beauty can often be found where it is least expected. In the Heavy Metal collection, she repurposes leather to look like genuine metal gears, which can be worn in either silver or gold, depending on how you choose to style the piece. Gender Bender, another of Kan’s collections. It manipulates gender-defined fashion pieces like traditionally masculine bowties and cuff links in new and interesting ways to redefine them. The bow tie piece, for example, is a lightweight sterling silver bow tie with a detachable strap (actually made from a bra strap) that allows the customer to style it based on their individual preference, as a bracelet, hair bow, or even in its traditional sense as neckwear.