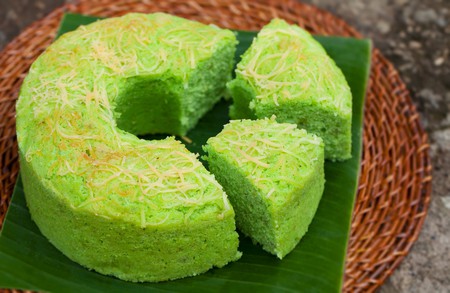 Skipping dessert in Singapore is an injustice to your tastebuds, for eating its sweet treats is akin to taking a bite out of the city-state’s cultural and ethnic diversity. Whether it’s creamy, soft Peranakan durian pengat or the chewy goodness of Chinese tang yuan (rice balls), Singapore’s sweet delights are a splendid thing.

The verdant, cushiony pandan chiffon cake is said to be of Indonesian or Malaysian origin with Dutch influences. Its striking green hue comes from the juice of pandan leaves, a popular ingredient in Asian desserts (not to be confused with pandas). Coconut milk, another ingredient common in Southeast Asian cooking, gives the cake a creamy richness. The dessert’s fame has spread far and wide, so much so that American news outlet CNN crowned it ‘Singapore’s national cake’ – which makes it even more tempting for you to sink your teeth into one.

Chendol snuggles its way into the hearts of Singaporeans like an essential cup of morning kopi (coffee). Even though it’s a common Southeast Asian dessert (also found in countries like Indonesia and Malaysia), the Singaporean version is one of the best. Chendol is composed of shaved ice drenched in syrupy palm sugar and creamy coconut milk, filled with squiggly, green rice flour jelly (or pandan mung bean flour jelly) and sweetened red adzuki beans. Topped with creamed corn, durian or grass jelly, you can customise this sweet treat to your personal liking. 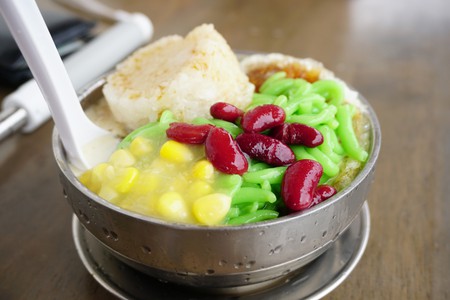 The durian pengat is a stinky-fruit lover’s decadent delight, though non-durian lovers may also be converted if they only dare to give it a try. The dessert has its roots in Malay and Peranakan communities, where pengat refers to fruits or root vegetables cooked in a concoction of coconut milk and sugar. In the case of the durian pengat, the durian is cooked to a silky smooth mousse-like consistency, topped with extra durian for a double helping. Some innovative versions have it topped with butter croutons and dollops of palm sugar syrup, which only makes this well-loved dessert all the more flavourful.

Cheng Tng means ‘clear soup’ – a refreshing bowl of cane sugar soup that comes with ample red dates, longans, lotus seeds, sago, barley and white fungus. This classic Chinese dessert is a quintessential offering in Singapore’s hawker centres and can be eaten hot or cold, depending how you like it. It is thought to soothe the throat and quench thirst, making it a perfect dessert for Singapore’s sweltering weather. 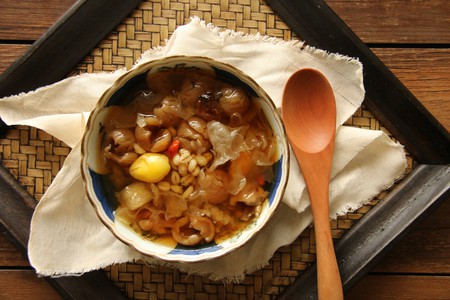 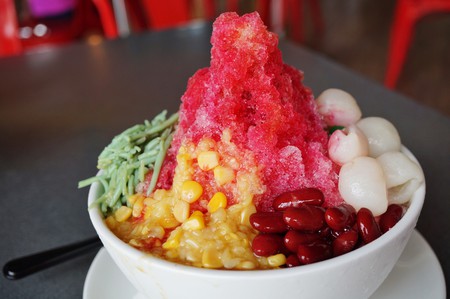 Ice kachang is a Singaporean dessert made of shaved ice, red beans and jelly | © EQRoy / Shutterstock

Orh Nee – the Teochew (a Chinese dialect) word for yam paste – is usually the sweet ending to a big Chinese wedding feast in Singapore. This traditional dessert originated in the Chaoshan region of eastern Guangdong in China, spreading to Singapore as early as the 19th century when many Teochews immigrated to Malaya. The dessert can be a tad sweet for some, as it tends to be drenched in sugar syrup. But in the better-made versions, the sweetness is tempered with the rich aroma of yam paste cooked in lard, making the dessert a perfect blend of sweet and savoury flavours.

This dessert of Indonesian origin has all the typical Southeast Asian ingredients: coconut milk, pandan leaves and palm sugar. Black glutinous rice is painstakingly boiled until soft and creamy, then simmered with palm sugar and pandan leaves and served with swirls of coconut milk. Also a fixture of many dessert stalls in Singapore’s hawker centres, pulut hitam is both a filling snack and dessert of choice for many locals. 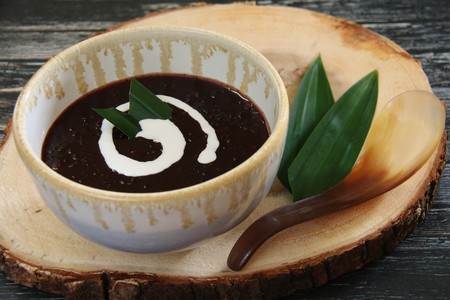 Ice cream carts can often be found in Singapore’s city centre, offering ice cream sandwiches instead of conventional cones or cups. These colourful carts are helmed by ice cream uncles or aunties (the endearing term Singaporeans give to these traditional vendors), delighting both kids and adults. They play a vital role in preserving an old-school Singaporean way of eating ice cream: sandwiched in fluffy pandan-flavoured bread, or crispy wafer slices. Flavours are typically chocolate, vanilla or strawberry, but if you are lucky, you can also find durian, sweetcorn or red bean varieties for a truly Singaporean take. 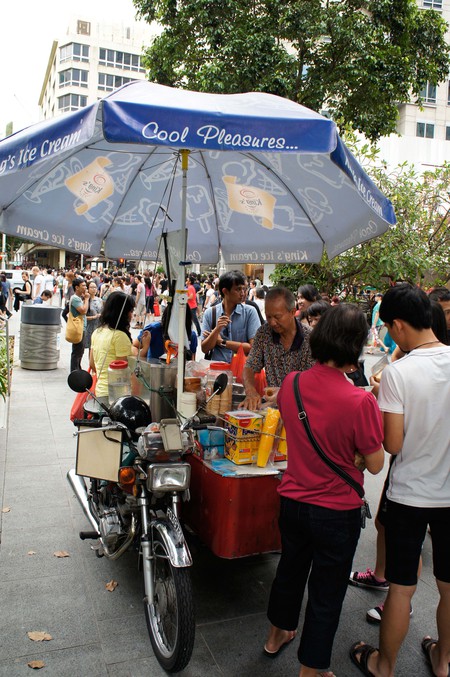 These sweet glutinous rice balls with peanut, red bean or black sesame stuffing are the best tummy warmers on a chilly, rainy day. Originating from China, they are usually eaten during the Winter Solstice Festival to signify family reunion and harmony. The Singaporean version – also known as ah balling to Teochew Singaporeans – is often cooked in sweet peanut soups, ginger-flavoured soups or versions flavoured with pandan and rock sugar. 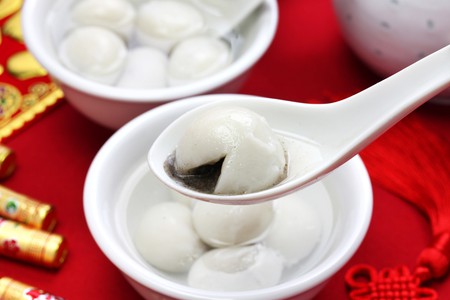 Tang Yuan is a dessert of Chinese origin | © bonchan / Shutterstock

The Singaporean dessert version of beancurd isn’t your typical tofu, as some might believe. Soya beancurd – also known as Tau Huay in Hokkien – is more of a soybean pudding, where soy milk is heated and coagulated into curds when it cools down, which explains its silky smooth, velvety texture. These soybean puddings can be served hot or cold, eaten just as they are with sugary syrup; or they can be savoured with toppings like tapioca flour pearls, red beans, or even green tea and durian mousse. 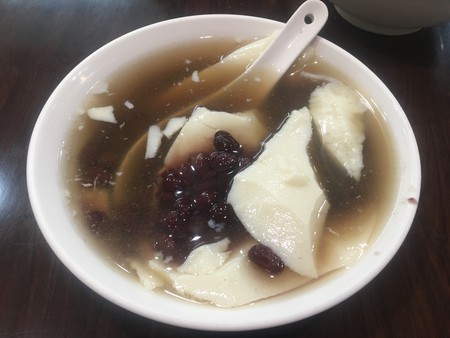