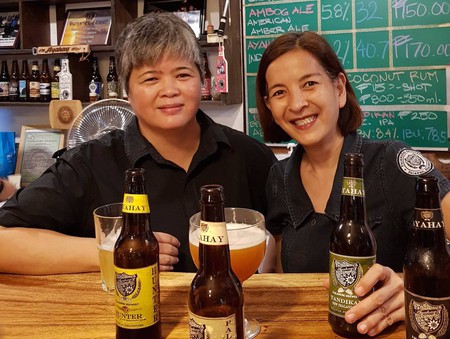 Just off a narrow road in Puerto Princesa sits one of the first microbreweries in the Philippines. Also famous for being run by the country’s ‘first female craft beer brewers’, Palaweño Brewery concocts unique beers bursting with flavors of the island.

Despite being open for six years, gaining rave reviews in international publications, and their beers being shipped across the globe, Palaweño Brewery’s heart of operations remains quite the secret. Aside from the taproom’s local regulars, its clientele are mostly savvy travelers who’ve done their research and stay in Palawan’s capital of Puerto Princesa long enough to drop by before heading north towards the white sands of El Nido and Coron.

The taproom and brewhouse sits past a typical driveway marked by a small sign that reassures visitors they’re in the right place and not about to trespass into someone’s home. Homey, however, is a rather fitting term for the taproom, with its no-frills set up and warm hosts. 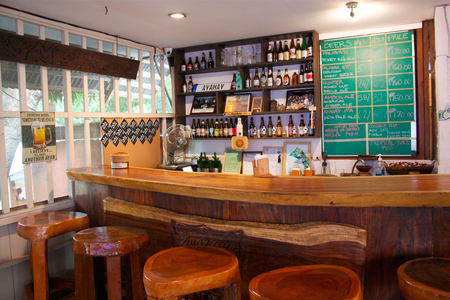 The passionate duo behind the brand, Ayah Javier and Malu Lauengco, are as hands-on as it gets: from experimenting with brews to sharing their story with interested writers.

Drop-ins quickly resemble a casual chat over beers with a new friend, even those intended to be feature interviews. “You lose the fun if you’re not hands-on,” explains Malu during our own rendezvous in their taproom one drizzly July afternoon.

She sits across from me at one of their heavy wooden tables and enthusiastically shares their story as if I was the first person to ask — not among the dozens of other writers who’ve lined up to interview them about this treasure of a place.

As craft beer was growing increasingly popular in the U.S., Ayah, who was living in San Diego, decided to take the concept back to home shores. So in 2012, with a home brewing kit and the drive to introduce this new craft to the Philippines, they began their venture. “She really believed that this was something the Philippines would need and would appreciate,” Malu shared of her partner. “And that’s how it started.”

The first year was devoted to tweaking and zeroing in on just the right recipes. They gathered friends and shared their experimental brews — some of which worked, others which didn’t quite hit the mark.

Malu laughs, explaining their year of trial and error was quite heavy with errors. “But we learned by ourselves,” she said. “We trusted our palates to tell us what’s good. That’s one of our mottos — we won’t come out with a brew that we can’t drink ourselves.”

And from this process came their five staple brews: the Ambog Ale, Palawan Wit, Palaw’An, Ayahay IPA, and Hunter. And every month, a special brew is introduced to round up the six-pack. 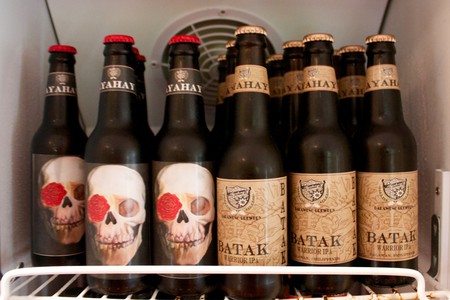 Wild Palawan honey from Southern Palawan, local palm candy called tangguli from Cuyo, and delectable Palawan mangoes from their own backyard — these are just some of the interesting homegrown ingredients that make it to their brewhouse and into their bottles. Ayah and Malu make it a point to showcase the island’s unique flavors in their brews.

“We make them truly ‘Palawan’,” says Malu of their beers. “We use indigenous products, like mangoes. Palawan mangoes can rival the best in the Philippines, but since we can’t bring them outside of Palawan, we use them in our Mango de Palawan brew during the mango season.”

Several years into the business, and it’s still just the beginning for Palaweño Brewery. “We have barely scratched the surface,” says Malu. She says there are so many other local ingredients they look forward to working with. “We’re excited because that’s what craft beer is about. It’s about being innovative — you can go crazy.” 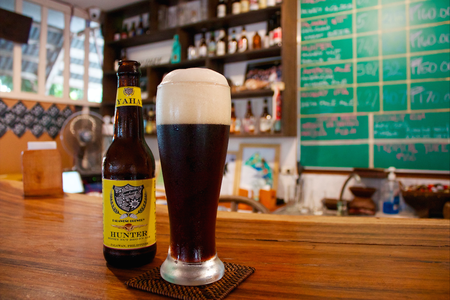 Boldly playing with flavors and trusting their palates has taken them far. They’ve become pioneers of the industry, introducing craft beer to the Filipino people and paving the way for the many microbreweries that have since followed. From the literal handful of microbreweries at the country’s first craft beer fest, there are now more than 50 sprinkled across the archipelago.

“The Philippines is really embracing it,” Malu says of craft beer. She explains that while it took some time for Filipinos to begin appreciating craft beer, it’s headed in that direction. This isn’t much of a surprise considering that for the longest time, much of the country’s beer culture revolved around the all-too-familiar San Miguel beer roster. But as much as Filipinos love their classic San Mig, they also seem to be embracing the innovative, curated flavors of craft beer. 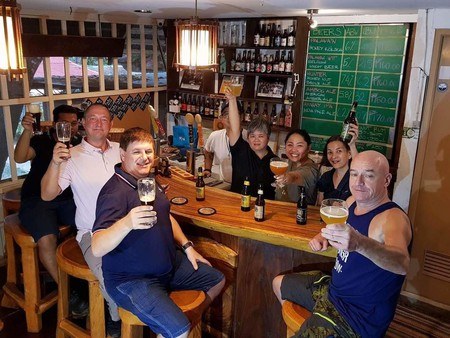 “We always say it’s not a fad,” shares Malu. “It’s not a fad because craft beer has been around for the longest time. So I would suppose it just takes a bit of educating the Filipino people. But it’s getting there.”

While they try to lure Filipinos into the world of craft beer, they also have their eyes set on sharing their brews with the world, but, donning the same laid-back vibe of their island taproom, they’re in no rush.

“We’re having such a good time right now,” she says. “When we started, we were only doing a five gallon thing from the kettle. And now we’re brewing in a three-barrel [brewing system]. So it was a slow thing that we did, but we want to make sure that we’re doing it right.”

When our interview formally ended and the recorder had been stopped, I knew I couldn’t leave just yet. Malu walked me over to the bar where another friendly face waited. 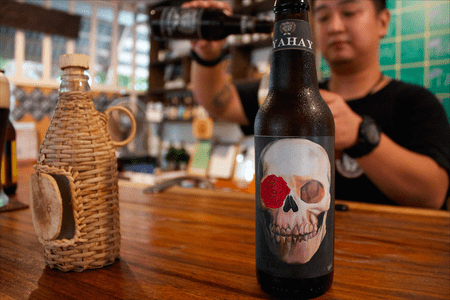 When the ladies are not around, they leave the space in the hands of an equally inviting face, Ayah’s nephew Dave. He pops open a bottle for a curious new customer and nonchalantly tosses the crown over his shoulder and into a wooden bowl by the sink behind him. His jokes and silly anecdotes are shared generously with both old faces and new, making anyone who walks in feel at ease.

Inside the rustic Palaweño Brewery taproom, such a relaxed, accommodating energy permeates that it keeps the space devoid of all the intimidating pretence many assume come with the experience of craft beer.

I mean to only have one bottle, but it goes down smoothly amidst the easy conversation and warm energy. One of their regulars comes in and joins us at the bar and we all continue chatting. It feels easy and I almost feel like a regular too. Malu insists I try their special coconut rum with my glass of Hunter and I quickly understand why it is raved about in every other piece I’ve read about them. 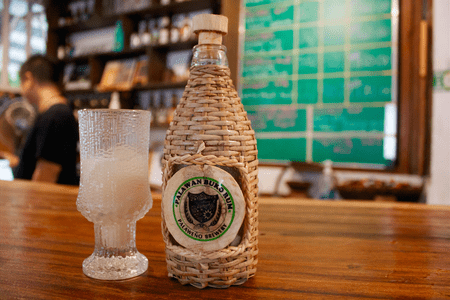 I almost want to buy a bottle, but decide to simply come back another day when I can sip and enjoy it again around good company.

The Palaweño Brewery taproom is the kind of place you’ll want to return to. Because whether you’re a local, tourist, one-time visitor or a regular, it oddly and so warmly feels like coming home.