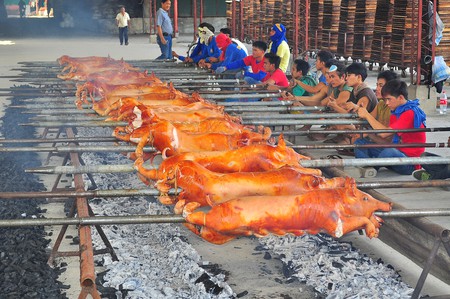 On June 24, before reaching the dining table, roasted pigs are dressed in costume and paraded along the streets of town Balayan, Batangas. The best part? You can take a piece of the roasted goodness as it passes you by.

Every year, the town of Balayan in Batangas, Philippines holds its Parada ng Lechon (Roasted Pig Parade) where, not only are roasted pigs paraded around town, but they’re adorned with themed clothes and props.

The Parada ng Lechon (roasted pig parade) is a festival you must see in Balayan Batangas. The celebration is held annually on June 24, and the feast day of San Juan (Saint John the Baptism) #ParadaNgLechon #ParadaNgLechon2k16 #BalayanBatangas #2daysToGo 🐷

A great variety of floats carrying the roasted pigs go by making the parade last a few hours. But spectators can maintain their energy by pinching off a piece of the tasty show – if they’re able to, that is.

Complementing the scrumptious roasts is a seemingly endless amount of alcohol. With beer flowing in from left and right, and live music blasting through the streets, everyone becomes enveloped in a celebratory mood.

Aside from the amusing and equally delicious spectacle of a parade, the people of Balayan also have a town-wide water fight to enjoy. On this day, nobody is excused. Buckets and loaded water-guns in hand, festival-goers douse each other with liquid, creating drenched, good-spirited fun.

Believe it or not, this festival has religious origins. On June 24, the town of Balayan celebrates the feast day of its patron saint, St. John the Baptist. While the water-fights are representative of him baptising Jesus, the parade of roasted pigs, on the other hand, is a symbol of thanksgiving.

Wholly roasted pigs, locally known as lechon, is a national delicacy for which the Philippines is known. While it is ever-present at typical gatherings and festivals all over the country, in Balayan, it has become a means of giving thanks for blessings received over the past year.

Before the parade, the pigs are slowly roasted in their entirety over hot charcoal. They are turned, usually by hand, continuously for hours, until the skin turns crispy and the perfect shade of brown. The roasted pigs are then dressed and adorned and brought to the town church where a mass is celebrated.

After the religious ceremonies, the parade and merrymaking begin.

What began as a simple parading of lechon in the town square decades ago, has grown into the exhilarating celebration the people of Balayan love, and come back home for, today.