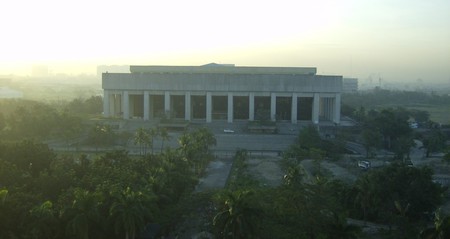 The Manila Film Center was built to host the 1982 Manila International Film Festival, housing a 360-degree theatre, film laboratory, and film archive center. What began as the ambitious vision of First Lady Imelda Marcos, envisioning that the Philippines was destined to become the “Cannes of Asia,” it is now one of Manila’s most haunted buildings—and a symbol of the atrocities under the Marcos regime.

With a budget of $25 million, contractors had less than three months to the Manila Film Center, which was to be modelled after the Panthenon. Construction was nonstop, with 4,000 laborers working three shifts every 24 hours. Work that should have been finished in six weeks was done in just three days. However, it was this rushed timetable that caused the ultimate tragedy, which remains shrouded in mystery after all these years. 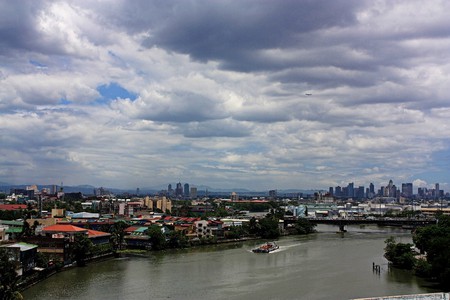 On November 17th 1981 at around 3 a.m. (considered “the devil’s hour” by many Filipinos), scaffolding of the upper floor of the film center collapsed. Some of the workers were impaled on steel bars, some were completely buried in rubble, while others were trapped in quick-drying cement from the waist down.

According to legend, Imelda believed that rescuing the corpses would only delay her project. Thus, Betty Benitez, the project supervisor, ordered cement to be poured over the victims instead. Rumors say that around 168 men were buried alive. It was only after 10 hours that press and official rescuers were allowed access to the scene.

Due to this delayed access, as well as the media blackout imposed under the Marcos’ Martial Law, there is no real record of the accident. However, rare footage of the incident has emerged—though it could only be shown after the Marcos government were forced out of office in 1986. The footage reveals a man half buried from his waist down. To avoid him to go into shock, volunteers sing Christmas songs to keep awake. When he was finally free after 10 hours, he was already dead. Stretchers carrying men covered in cement can be seen in the same footage.

Mila Llorin, head of marketing at the Manila International Film Festival has said of the incident: “I was told that they just cut up all of the ones that were exposed…remove and build over…which is why the seats are very steep. It was a rush job. So these people were just, you know, they had to finish it, period.”

The show must go on

True enough, the film center opened on schedule with the first ever Manila Film Festival in January 1982 hosting Hollywood glitterati such as Brooke Shields and George Hamilton.

Imelda wanted Manila to rival Cannes as a world film capital. At the cost of $25 million, Imelda approved plans for the Manila Film Center to be built to host an international film festival. Opening night was set for January 18, 1982. The project was grandiose and expensive; the building on Manila Bay was designed to look like the Parthenon. Brooke Shields was only 16 years old when she traveled to Manila for the international film festival as the guest of First Lady Imelda Marcos. #brookeshields #imeldamarcos #blackandwhite #firstlady #kblparty #kilusangbagonglipunan #nationalistaparty #1982 #philippines #philippinepolitics #1980s #actor #actress #ManilaFilmCenter #Parthenon #hollywood #famous #vintage

However, the theater was under construction up until the last moment, with men still working during the final hour before opening time. Glamorous guests were unaware that, underneath the red carpet, the cement was still wet. Guests wearing long gowns found paint on the ends of their dresses. However, the visitors were totally oblivious that they were walking on top of hundreds of corpses.

A number of rituals have been carried out at the Manila Film Center in an attempt to drive away the lost souls—but many believe that they still haunt the building. Cries, strange mysterious winds, and shadowy figures are heard, seen, and felt within the building. During the time when the center acted as a Foreign Affairs building, employees were often spooked, saying they heard strange sounds when no one was around. 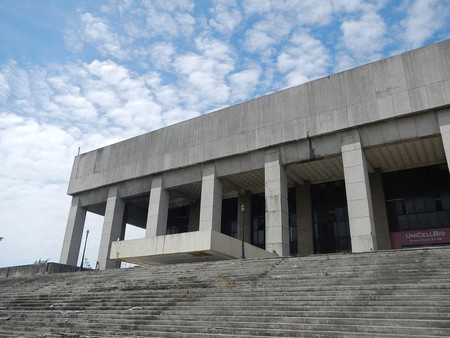 Months after the tragedy, Betty Benitez died in a freak accident. Some say the souls of the men she left entombed at the Manila Film Center claimed hers as well.

In 2001, the film center underwent a rehabilitation costing over $15 million, and it is currently being used as a theatre.

Are there really ghosts inside the Manila Film Center—or is it simply a ghost of the Philippines’ past?