The Best of Filipino Pop Music 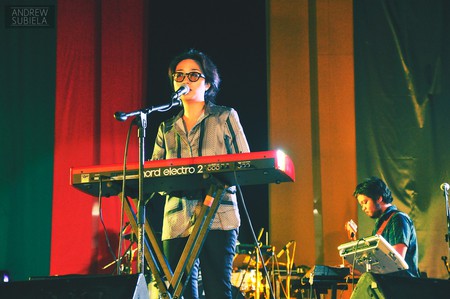 UDD at a gig in Letran Calamba | © Andrew Subiela/Flickr

A good way to connect to a different culture is through art—especially music. Here is the best of old and contemporary OPM (Original Pilipino Music). Acquaint yourself with these local artists whose works have captivated Filipinos through the years.

This indie-folk band of six found itself skyrocketing to success after winning the WanderBand competition in 2014. With its full and upbeat natural sound, the band quickly graced the stages of the country’s biggest music festivals. And in October 2017, they wowed India in their first international performance at the ASEAN-India Music Festival. Achieving the perfect blend of harmonizing vocals, violin riffs, and playful percussion, this band easily builds a fanbase wherever they go.

UDD, formerly known as Up Dharma Down, has been in the industry for over a decade. Their sound isn’t classified under any particular genre, not even by the band itself. They often play with a lot of jazzy rhythms and electronic instruments. Throw in lead singer Armi Millare’s entrancing voice, and you’ve got the UDD sound. The band has always had a loyal bevy of listeners, but what took them mainstream was an emotionally relatable song from their 2012 album Capacities called “Tadhana” and a rediscovery of one of their first hits from their 2006 album Fragmented entitled “Oo.”

It’s not an easy task to create songs that are pull-at-the-heartstrings beautiful without being cheesy and cliché. But this difficult balance is one Ben&Ben manage to strike. Singing-songwriting twins Miguel and Paolo Guico are frontmen of the young yet already highly popular indie-folk band Ben&Ben. The sibling duo found their breakthrough at the 2016 PhilPop Music Festival where they won third place for their composition “Tinatangi.” Soon after, they released a four-song EP which had their name soaring the charts.

This next band hardly needs an introduction. The Eraserheads, a truly iconic band, paved the way for many other local artists and OPM genres that followed. They are often described as “The Beatles of the Philippines” and their raw, catchy, often humorous music was loved by an entire nation. “Eraserheadsmania” took over the 90’s when the band released one major hit album after the other. Despite breaking up a decade into their career, the band remains one of the most influential in the country’s music history, and their songs are still played and loved by Filipinos today.

Autotelic brings a refreshing new sound to the OPM scene. Not many bands venture into Tagalog electro-pop-rock aimed at making their audience get up and dance, and their upbeat tunes really do make it difficult to keep still. While they’re a band of millennials that began in 2012, their songs could fit right into the 80’s synth-pop era, which their parents’ generation would also enjoy. Their music is a flawless blend of the old and the new and an interesting emergence of a contemporary OPM genre.

One of the longest-running OPM bands, having come together in the early 90’s and still performing today, is Parokya ni Edgar. The band’s comical lyrics and just-as-amusing performances influenced a whole generation of band-aspiring high school boys who identified with their mischievous character and tongue-in-cheek music. They continue to sell-out venues they play at today and still work on new music, having released their latest album, Pogi Years Old, in 2016.

Despite being in the music industry for about a decade now, this singer-songwriter wasn’t always in the spotlight. She subtly displayed her talent by lending her sweet and soulful voice to multiple TV ads through the years, including commercials by McDonald’s and Johnson & Johnson. Her recent spring to fame can be credited largely to her original “Malaya,” which was used in the 2016 box office hit Camp Sawi. Soon after, listeners caught on to the artist, and her emotionally captivating lyrics and sincere vocals kept them hooked.