The 10 Best Places in Manila to See Street Art

The Philippine street art scene is young, vibrant, and poised to break down a lot of barriers in the art world. If you’re a Manileño and haven’t seen any jaw-droppingly beautiful walls on your way to work yet, you will soon. The  Filipino Street Art Project dedicated their lives to documenting street art, and these are their picks for the consistently best walls in Metro Manila.

Many of Manila’s street artists are alumni of UP Diliman’s College of Fine Arts, and they’ve returned to beautify the campus. Take the ‘Ikot’ jeepney and look out the window to see historical and political murals by the art collective Gerilya. This group of four CFA grads continue to set the standard for socially relevant commentary in their work. Appropriately, their murals at UP feature representations of youth and education. The big draw is their ‘2013 recap mural’ which is segmented into a timeline of the year’s biggest events, such as Typhoon Yolanda and Supreme Court rulings on land reform.

The Vinzons student center is home to political groups like Anakbayan, and peppered with protest tags and little white maggots painted by the legendary graff writer Hepe. The sprawling, open campus is also a perfect place to escape the urban buzz of Manila and seek peace and quiet. UP has some of the best cheap eats in the city, and you’d be a fool to pass up Mang Larry’s barbecue isaw (chicken intestines) for only 3 pesos each. 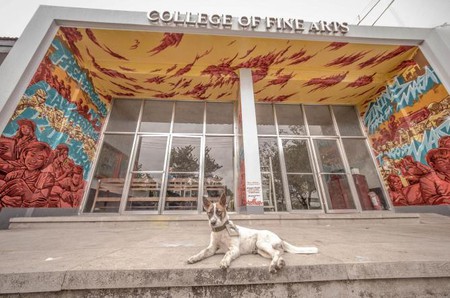 This long wall stretching off Mayor Gil Fernando Avenue in Marikina has been agreed upon by all the street art and graffiti collectives as a sort of ‘freedom wall,’ where anyone can come practice and paint. As a result, nothing stays long here, so come back often and see what’s new and who’s been painted over. The wall runs to a dead end that doubles as a jeepney bay, where many drivers and fare-takers break and have lunch, so you won’t be alone in your gawking. When we were last here, a jeep driver let us stand on his roof to snap the perfect photograph.

Valenzuela is the northernmost city of Metro Manila, and the stomping grounds of PSP artists like Brian Barrios and Gori Bautista. MacArthur Highway’s walls will inevitably show off their characteristic styles. So look for lots of graphic and outspoken protest art from Barrios, a leading artist for the student political organization Anakbayan. His simple, black and brown wheatpastes of rural and family scenes emote so powerfully the heart of the Filipino, and reflect the humble beginnings of his art career. Bautista is known for his gorilla character, which he is equally adept at painting with acrylic or wheatpasting. 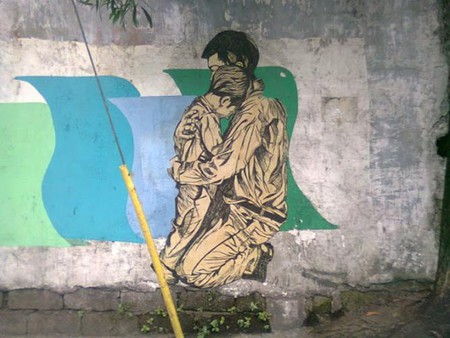 If you’re looking for high-quality commissioned murals, look no further than Fort Bonifacio. This former army camp is now the happening arts and commerce district of the uber-wealthy Ayala family. There’s always something for the art lover, whether it’s new commissions from Filipino street artists like Jood Clarino and Dee Jae Pa’este, or the occasional interactive art installation for kids. They are not afraid to splash the cash on good art. Last year, BGC brought in internationally renowned street artist DOPPEL from Japan to paint a portrait of Bonifacio himself, causing a bit of a stir amongst those purists who feel that painting pinoy heroes should be a Filipino’s job.

The City of Manila has been changing its tune on public art recently, taking on a number of beautification projects, and its big showpiece of 2013 was the Urban Artscape Project. Headed by University of the Philippines professors, these 20-meter high underpass columns are all painted by five different art groups from the university. Each of the ten columns is inspired by traditional Filipino historical and cultural narratives, including past revolutionary heroes and regional artistic styles. A portrait of Rajah Sulayman, the pre-Hispanic King of Manila, looks all the more impressive at this height, and the vibrant murals stand out starkly against the dreary grayness of the bridge’s underside. Look for them out the window of LRT 2 between Pureza and Legarda stations. 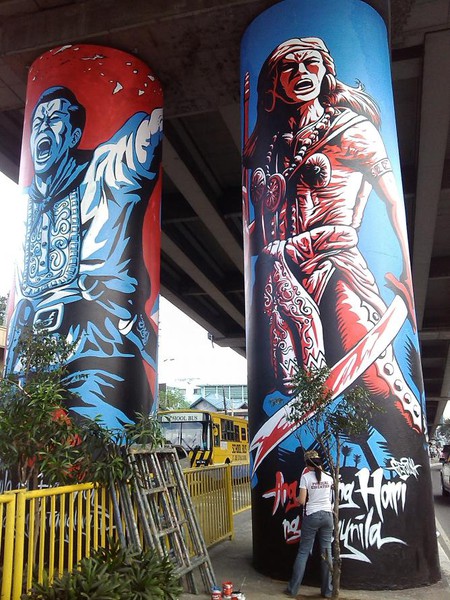 If you’re looking to just have fun, check out The Collective, a grouping of popular shops, galleries and live art spaces all centered on the funky atmosphere of the bar/club B-Side. Every Sunday night at B-side has live reggae and live art, which is really all you need, and the crowd is always young and eclectic. Things can go from chill to a straight up party before you know it, so either pick your night or just go with the flow. Kanto Artist Run Space and Vinyl on Vinyl are two of the most established street art galleries in the city, and are a consistent bet for live art or eye-popping multimedia exhibits. This is our favorite hangout in the city for people watching and art spectating with a beer in our hand.

This central boulevard in downtown Manila is one of the main arteries of street life in the city. It plays host to Rizal Park, with its massive relief map of all 7,107 islands in the Philippine Archipelago, and many government buildings and universities. Take the LRT-1 and get off at Vito Cruz station. Start patrolling south and keep your eyes open. You’ll see works from Mapua professor Rai Cruz, PSP photographer and artist Geloy Concepcion, and German art-activist Peter Stocker, amongst others. This is a wandering journey, so set aside an afternoon and don’t forget to check all the abandoned lots. You’ll absolutely be rewarded. 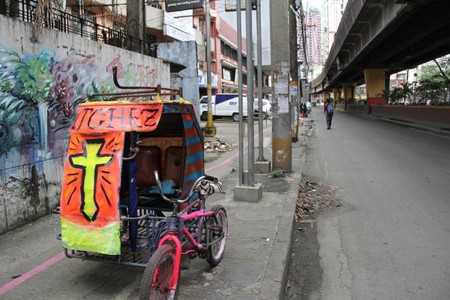 This long stretch right outside SM Molino is lined with works from Cavity Collective artists, and almost every side alleyway off Molino Road will produce some finds. Right now, you’ll see a series of tributes to the late Triskaidekka Masuerte, a Cavity brother who passed away suddenly and tragically earlier this year. This is a day-long trip from Manila, so your best bet is to immerse yourself in the surroundings, take a meandering stroll through the streets of Molino, and end your visit with a plate of freshly grilled liempo (pork belly) right on the street.

Along any major road you’re likely to see tags, but along Aguinaldo Highway leading out of the south of the city, you’ll see Cavity Collective walls the entire way. Artists from the area, like Blic Pinas and Lee Salvador, ride the bus into Manila for work and every day they see their own pieces of street art lining their commute. When we asked Salvador what it’s like to literally decorate his daily life, he said he turns the streets into his ‘little reminders’ and each work means something different to him that he’d rather not forget. 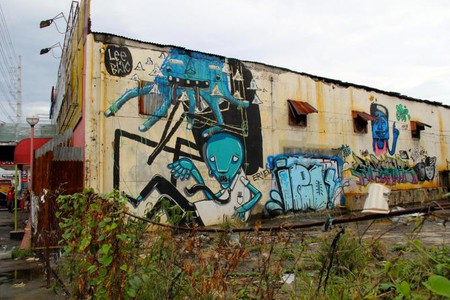 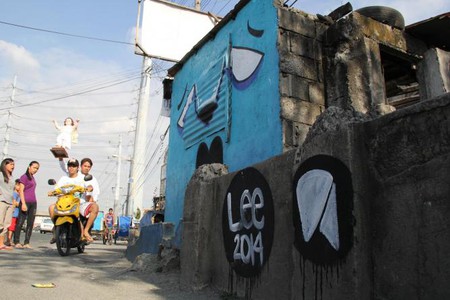 Intramuros is the historic center of Old Manila and still contains many architectural landmarks including the old fortifications that date back to Spanish rule. Just a block down from San Agustin, the oldest church in the Philippines, is a fenced in set of basketball courts that are always occupied and always colorful. Here in the heart of colonial past lies a full display of some of the best 21st-century urban art. When our street artist friends from California came to visit Manila, this is where graffiti artists Egg Fiasco and EXLD, leaders of the collective Pilipinas Street Plan, brought them to collaborate. What you’ll see on the main wall now is the gorgeous product of this trans-Pacific collaboration: PSP x The Method Makers. There is also a lot more than what you’ll see from the street, so be sure to navigate around all sides of the court. Just watch out for the not-so-friendly dog chained up behind the eastern wall.