ASIA
/
PHILIPPINES
/
CEBU
/
Things to Do

Sinulog: What to Expect at this Epic Philippine Fiesta 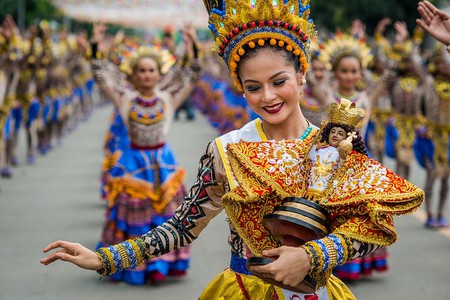 Every town and city in the Philippines has its own festival, but if there is one festival you have to experience at least once, it’s definitely Cebu’s Sinulog Festival. Celebrated every third Sunday of January, the Sinulog is held in honor of the Holy Child Jesus or the Santo Niño. Attended by at least three million devotees and revelers, Cebu has the grandest fiesta in the country. Here are some things you have to know about Cebu’s festival and what awaits you.

Sinulog is a dance ritual

The word Sinulog comes from the word “sulog” which means, “water current,” in reference to Cebu as a coastal settlement. During the festival, you will see attendees performing a special dance. It’s during the parade’s street dancing, that you’ll spot the trademark dance steps – one step forward and two steps backward.

The dance precedes Catholicism; the natives used it as a tribute to their pagan idols. When the Spaniards came and baptized the locals, the locals continued the ritual. At present, candle vendors outside the Santo Niño Basilica perform the dance as a form of prayer.

You’ll often hear the “Pit Senyor!” phrase during the Sinulog festivities. Devotees and Cebuanos shout these with much vigor. The phrase is short for “Sangpit sa senyor,” which literally means “A plea to Sir.” The Holy Child is also referred as “Senyor Santo Niño.”

As one dances the Sinulog, you sing or shout the phrase, “Pit Senyor kang (insert name) kini!” – offering and praying for others through dance. Pit Senyor also acts as the festival greeting during the Sinulog. 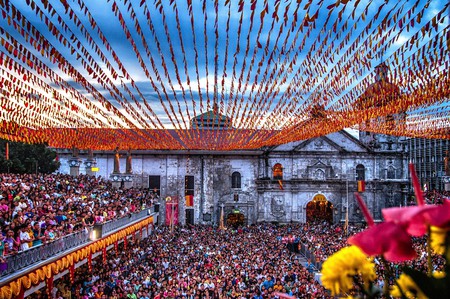 It is still largely a religious fiesta

Most festivals in the Philippines are religious in nature, but through the years have succumbed to commercialization. The local government and the Church locked horns with the business sector to keep the solemnity of the Sinulog. As the oldest Christian relic in the Philippines, playing a significant role in the Catholic faith in the country, millions of Filipinos have a deep devotion to the Holy Child. There is a nine-day devotional prayer at the Basilica del Santo Niño (where the Santo Niño is enshrined) called novenas, fluvial parade, and the solemn procession, attended by millions of devotees. Traditions still prevail, like the traditional changing of robes of the Santo Niño.

Grand Parade – a feast for your senses

The day after the religious procession is the highlight – the grand parade. Different teams from other parts of the Philippines compete for this highly choreographed street dancing procession, following key elements of the Sinulog – the ritual dance, the familiar Pit Senyor phrase, the beat, and the lovely lady (aka, the lead dancer) holding a Santo Niño. This long parade delivers the essence of the Sinulog as one beat and one dance. 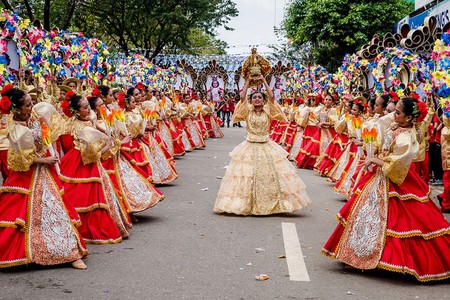 Sinulog dancers and their queen | © Rodney Ee via Flickr

The grand parade can last for hours. Find a good spot, be prepared to be pushed by the crowd, and watch a sea of photographers clicking away to this extravaganza of costume, music, and dance. You can also secure tickets to Sinulog grandstand at the Cebu City Sports Complex.

Where’s the party at?

For some years, Sinulog was on the verge of becoming a wild party festival rather than a religious and cultural festivity. To deal with this, the local government is considering banning the serving of alcohol and staged parties along the parade route for future Sinulog celebrations. It is suggested to have all parties a little bit off from the city center away from the pilgrims and devotees. Containing the parties and alcohol consumption is a possible solution for rowdy parties that discouraged families from enjoying the festivities (and giving law enforcers some headaches).

Your phone can be useless

Since last year, phone signals were cut off for two days during the solemn religious procession and during the grand parade to avoid terrorist bomb attacks. A little bit of an inconvenience for some but everyone cooperated. Its successful implementation as a security measure was echoed by other festivals in the Philippines.

A time to socialize

Sinulog will never be boring even if parties and drinking will be banned along the parade routes. There are many bars all over Cebu City for visitors to enjoy the revelry and get their alcohol and party fix. Not just for party animals, the Sinulog fever can be felt within restaurants and hotels, all of which have their own gimmicks for customers. Outdoor parties outside the parade and procession routes are widely organized too.

Have a “survival” plan

Most tourists flock here during the Grand Parade, and, with the number of people, you need to have a plan. First, it is best to travel with a group but expect to get separated. The parade route follows the main roads of Cebu City, thus it is a walkathon. Wear good shoes, cotton shirts, a hat, and remain hydrated. If it is your first time, don’t push yourself into the crowd just be right in front of the performers. Be nice to fellow attendees, and you’re ready to enjoy Sinulog.

So dance to the beat and Pit Senyor!