Where To See Tarsiers in The Philippines 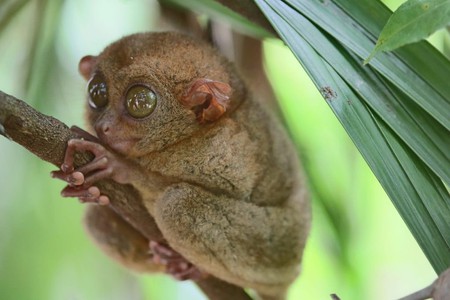 Small yet agile – these are the adjectives that would best describe the Philippine Tarsiers, a species endemic to the Southeast Asian country. Considered as the world’s smallest primate and known for their large, brown eyes, this species has attracted both local and foreign tourists who are curious to know more about the magical creature and its habitat. 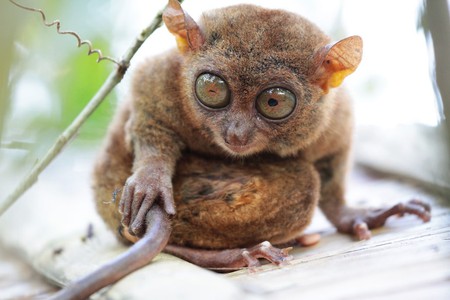 The Philippine Tarsier belongs to the 45 million-year-old primitive sub-order Promisii or promisian. Comparing it with the size of an adult’s hand, it measures only about four to five inches and weighs around four to five ounces. Its eyes are the most notable feature – being twice as big as human eyes yet unable to see from the corners. Apart from having big eyes, its distinguishing characteristics are its tail that’s longer than its body, long finger-like claws, and a flattened face with hairless ears. Because of its physical similarities resembling that of a monkey, tarsiers have also been known as the ‘world’s smallest monkeys’.

Philippine Tarsiers are also like owls. They’re nocturnal creatures that sleep during the day time and are wide awake and active at night. Like the owl, it can also rotate its head 180 degrees in each direction because of the presence of a joint in between its skull base and spine. 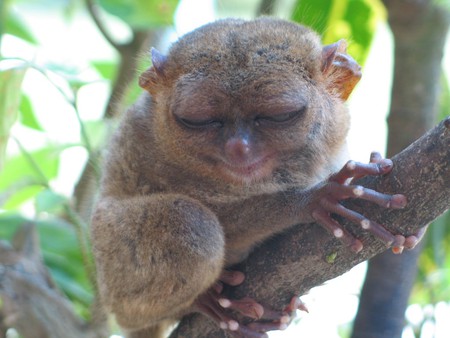 While these small creatures seem like they’re harmless (as they mostly cling to branches) and cute (because they’re pocket-sized), they’re very agile predators. They’re able to leap great distances of up to 10 feet. They also have sharp teeth and two incisors in their lower jaw, making it easy for them to catch their prey. They mostly eat fruits and insects such as crickets, and even small lizards.

Another notable characteristic of Philippine tarsiers is that they are always together and they live in groups. And, when they gather, they produce a chirping, locust-like sound. Tarsiers are also said to be monogamous and only mate once a year.

Where to find them?

These furry, tiny creatures can only be found in the islands of Bohol, Samar, Leyte, and Mindanao. While there are other species of Tarsiers found in Indonesia and Borneo, the Tarsius syrichta species can only be found within forests, dense patches and tall grasses in the above-mentioned islands of the Philippines. But, due to habitat destruction, hunting, and other forms of human disturbance, Tarsiers have become endangered in the country – just like the Philippine Eagle. Some of these species are also being illegally sold as pet souvenirs to tourists. 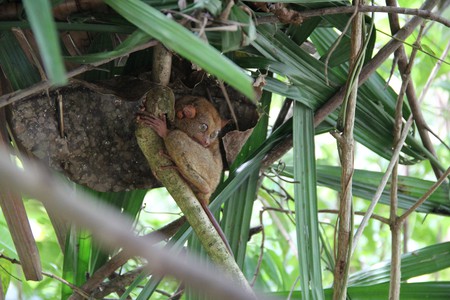 Despite threats to this rare species, there have been organisations dedicated to protecting them such as the Philippine Tarsier and Wildlife Sanctuary and the Philippine Tarsier Foundation, Inc. The 167 square-metre sanctuary, located within the municipalities of Corella, Sikatuna and Loboc, is open to tourists but they are not allowed to touch these shy, nervous creatures nor take photos of them with the flash switched on.